Cycling My New 10 G And all the stuff that goes with it :)

HI I've never had a blog before and now I do .

You can call me clee

So this is my first entry... Hmm while I was super excited a moment ago now I have no idea where to start. It is late and I am tired so I'll do more tomorrow. But first I want to say that this is a great site full of helpful people and I think I will really enjoy it here.

I have not cared for fish like this before. What I had done was betta's in small glass jars and horrific water. I am so very new and in the month or so I have been doing this I have found a few problems and a few new and old friends.

My daughter and I have two tanks already and I think this is a great hobby for us.

So tomorrow I will give all my stats on my tanks etc. But until then I could see me over sharing at some point

Hey clee! Just read you had a new blog, so thought I'd come join you!
You will enjoy it here, there's always something going on somewhere. Hey, if you have the problems, we've either had or still to have the problems, it's a learning experience and we all learn from each other.
And I like your sig too
OP

Just so everyone does not have to go through my old posts, lets recap.

I have two tanks and when I say I, I mean me and my Daughter have a tank each.

Her tank was started a few weeks before christmas with some help from a friend's established tank. 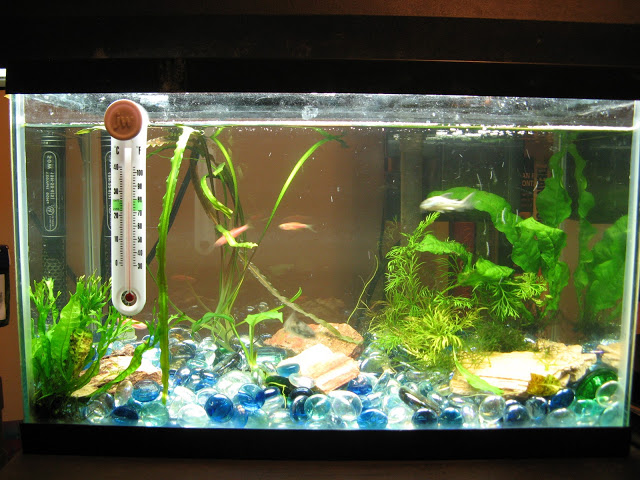 5.5 G, incandecent lighting, aquaclear mini(ammonia,carbon,sponge) 80*F
Cycled 0/0/20 ish
4 Glow Danios, 2 Cory Catfish
Several Live plants. I do not know what they are called and if you do then tell me
More snails than I want(more on that later)

We are now slowly changing the substrate to pink gravel. 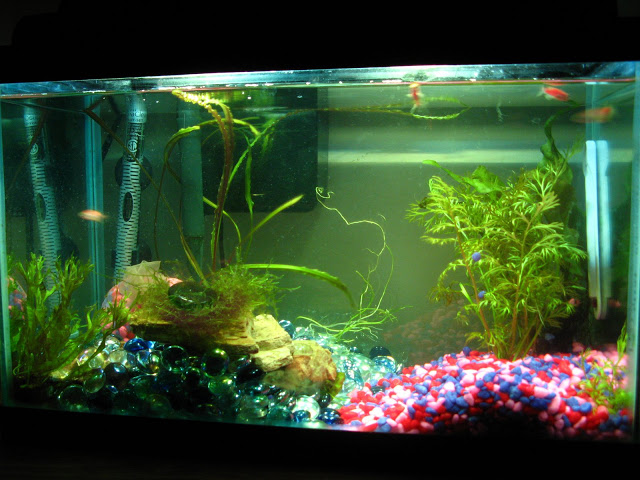 For ease of conversation lets just call it "BabyGirl's Tank"

So I have almost the opposite theme going on in mine. A friend of mine suggested the theme be "dead cat" and i'm sorry but I found it amusing. So I actually looked for dead cat skeletons. Well I found it and Voila ! 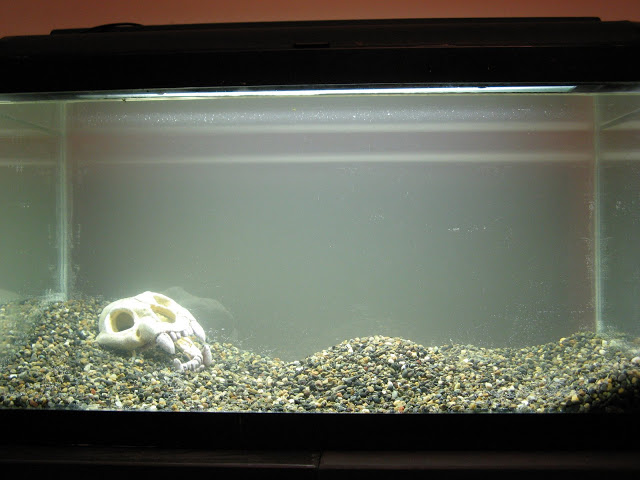 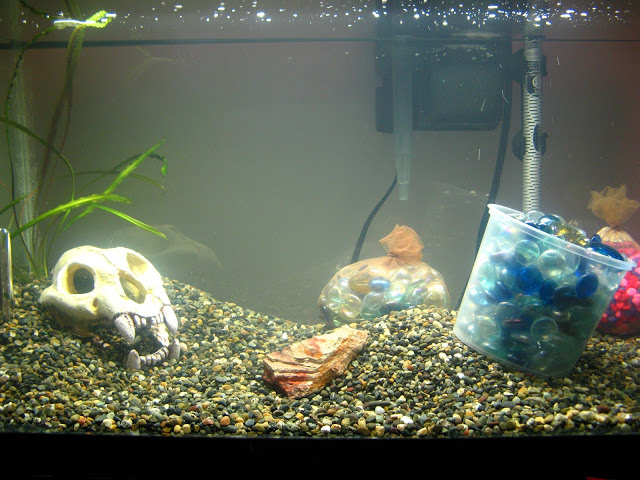 All was going good I had a Betta and substrate from an established tank.
Everything was fine . I really was starting to like the little guy.
I did regular tests and I had no readings for anything then on the morning of the 6th day, I found him dead

well I tried a few things and have a new betta in the tank. we'll see how long this one lasts.

0/0/5? ish (i'm not doing a partial water change for a days or two, test again, and see where I am at, because I have a few plants now and very little bioload.) 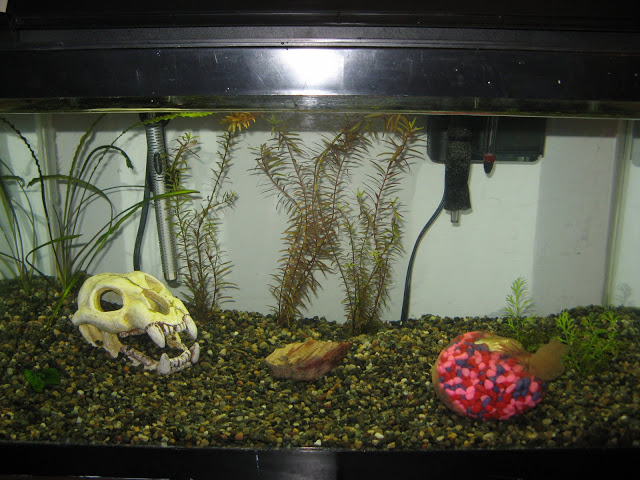 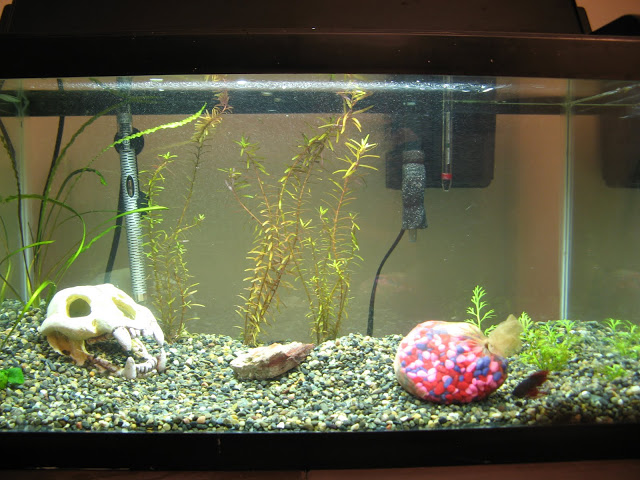 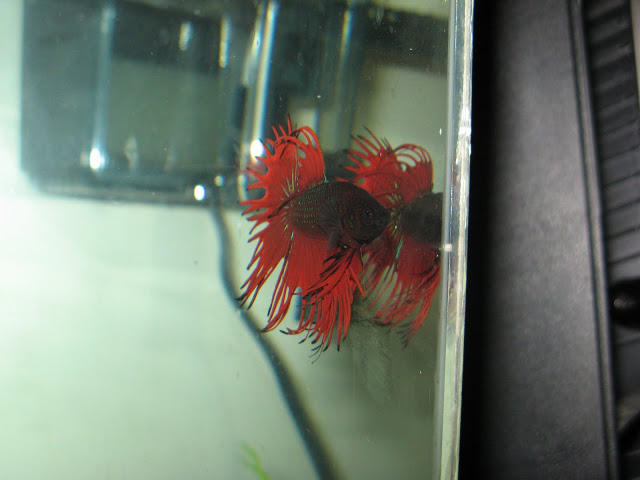 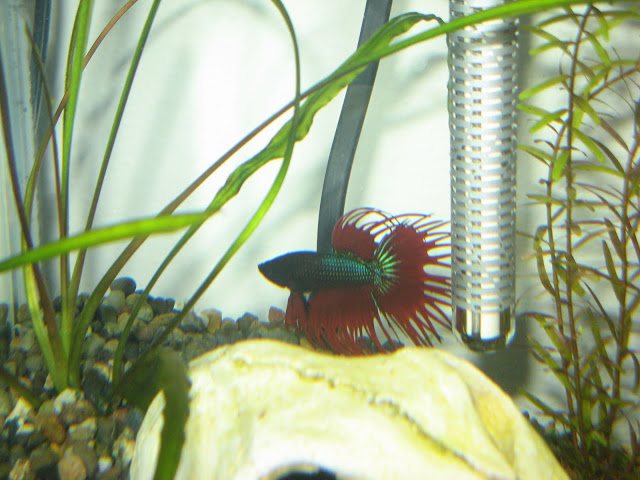 I just went out with babygirl and bought backgrounds and a piece of driftwood. If I forgot anything I will probably just update this.

Thanks for hangin with me

Your betta is very handsome and very lucky. That will be a wonderful home for him.
My best guess on the plants...
5.5 during switch- Looks like Lace fern front left and java moss on the rock (not sure which kind). Wisteria? front right and I would GUESS java moss back left. I think the long stringy one is an aponogeten.
10G looks like an Aponogeten and Rotala (or maybe Ludwigia Palustri)
So your daughter didn't like the blue stones?
S

You might want to try black gravel with spots of white n pink/blue/voilet gravels here n there. It would support your dark theme!

Congrats on the blog! I enjoy having mine. It helps me to keep track of things sometimes when I really need it.

last night Baby girl (8yrs old) did a cleaning of her tank almost all by herself. Cleaned filter media, scrubbed walls of algea, conditioned and syphoned her own water, hope it all goes well.

I have to tell you sometimes I forget to tell her everything and I told her how a gravity feed syphon works, so she says ok and starts the syphon, not sure if I told her any precautions yet . Now I am taller than her and when I get it started it stops because I'm taller than the tank. her on the otherhand.... I see it come rushing over the top of the tank down to the bottom of the hose and start rushing upwards towards her mouth. He he he he he.... ok so I do love a good laugh at my daughters expense but I couldnt let her drink this. (I'm actually laughing outloud as I remeber this visual) so a second before it hits her lips I try to be a good dad and stop the flow by pinching the end and pulling it from her mouth(or so I think). I only tightened the end kinda like putting your thumb over a garden hose, the water doesn't stop it just sprays farther !

She is now looking at me with this look like WHAT HAPPENED!, one second she's helping the next dad's spraying me down with fish water !!!!!!!!!!!!!!!!! ROTFL

Then I put a tank background up for her. looks sharp 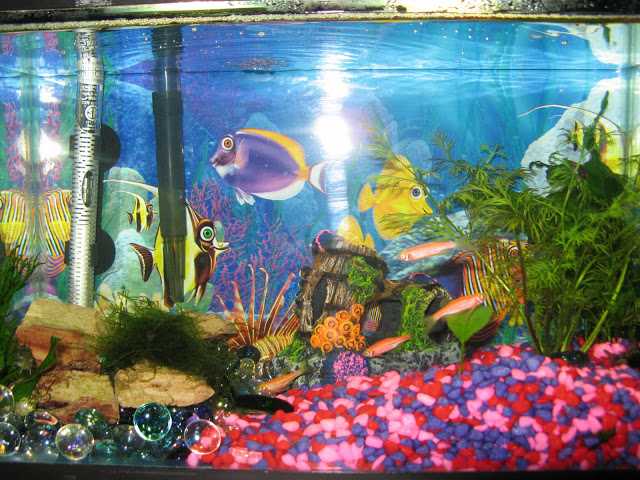 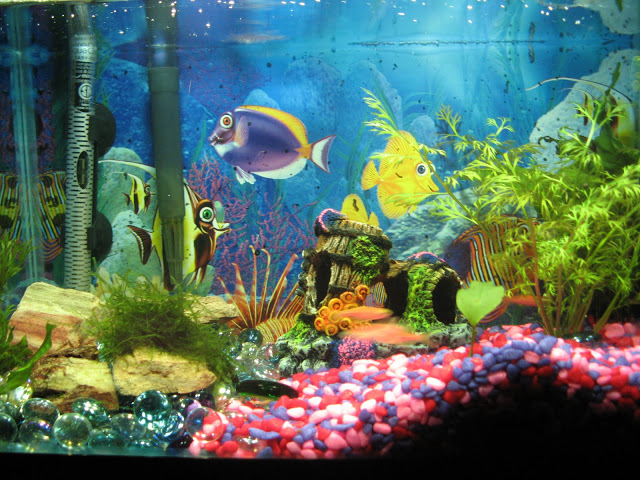 That was a sweet babygirl/daddy moment! It'll be one of those special moments she remembers years down the road.

I LOVE her background! That looks really cool.

Not you got me thinking.... maybe I should start having my 8 and 11 year olds take care of their own tanks... It is "their" tanks... but I do all the work.
I have two gravel vacs... the lazy mans Deluxe one that attaches to a faucet, and for the smaller tanks I use a syphon that you shake up and down to start. That way you don't have to suck on the tube.
You are going to be hearing about that incident for a long time. ;D
OP

sun82 said:
You might want to try black gravel with spots of white n pink/blue/voilet gravels here n there. It would support your dark theme!
Click to expand...

HUH? pink/blue/voilet ????? Thank you for the suggestion but I have other plans.

Oh no ! She loves the stones she would just rather them be in her hand than in a tank.


bolivianbaby said:
That was a sweet babygirl/daddy moment! It'll be one of those special moments she remembers years down the road.

I LOVE her background! That looks really cool.
Click to expand...


kcarmartinez said:
Not you got me thinking.... maybe I should start having my 8 and 11 year olds take care of their own tanks... It is "their" tanks... but I do all the work.

You are going to be hearing about that incident for a long time. ;D
Click to expand...

Psst.....babygirl,
Tell daddy to walk away for a minute so you can watch this video:
1-2-3 easy aquarium siphon instructions - video
Of course, it's probably much funnier watching Daddy get sprayed with fish water. lol

Just curious, are the heaters fully submersible?
Is so, you might want to put them horizontally in the tank. That way you won't have to worry about the water going below the line through evaportation or water changes.
OP

You are too funny Lucy
Nope. but the next ones will be for that reason.


So last night I put in the drift wood I put on a background and did a water test. A day or two more and I'm going to cut some plants 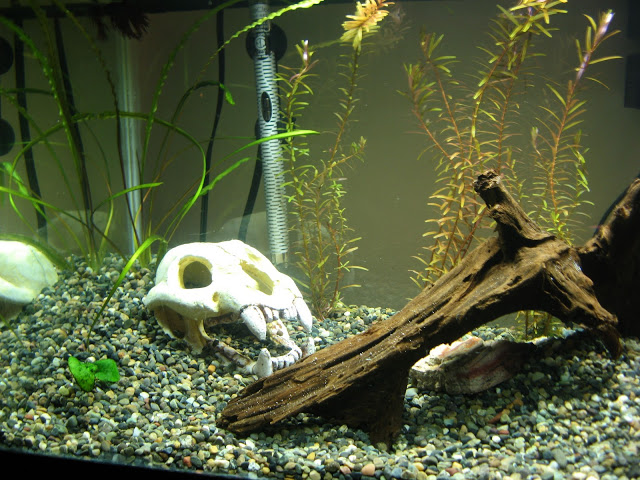 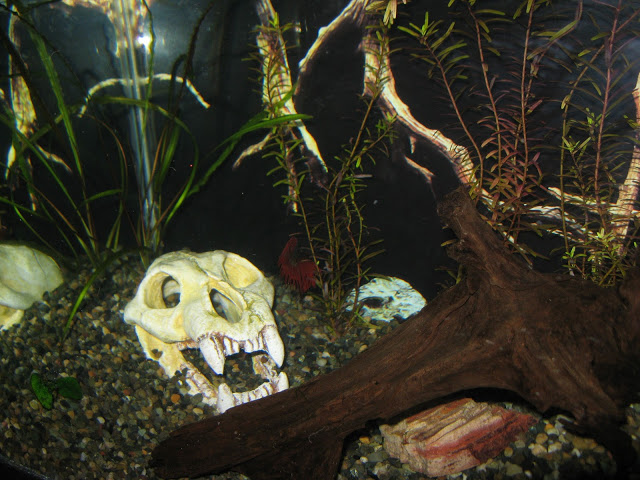 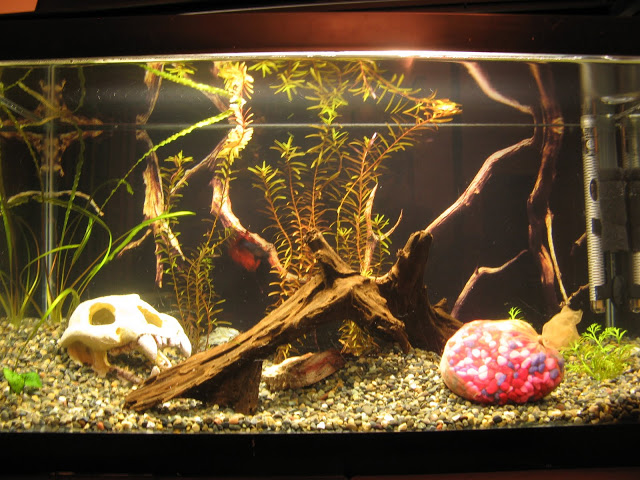 So it seams i'm starting to cycle.

Now like I said in a post before when I get a reading of ammonia I'm going to introduce some fresh bacteria.

So today when I get home from work I test again.

Tried to feed him fresh garlic he just chewed and spit :s
OP

Ok so I get home from work and I do a water test and from what I've read this is strange hopefully I'm reading it wrong.

Is this normal? Where are my nitrItes?

ok so I did some reading and i'm just impatient

The tank looks even better with the drift would and the plants... very nice tank!!! I believe it will serve as a wonderful home for your betta...


btw very nice betta looks to be in good shape!!

The tank is looking good! I like the added driftwood and back ground.
S

I like the driftwood man, keep up the good work.

All these betta tanks are kind of making me want one now.
OP

Thanks everyone! The tank is coming along nicely. I think its cycled now I have 0/0/5 the nitrAtes are barely detectable but its a small small bioload. I've been doing 10% water changes everyother day.

It is in my front room and as I layed on my couch saterday morning. I noticed my front room get pretty bright in the morning to afternoon. I like the tank so I didn't close the blinds. but I think there aren't enough of something for them to flourish (some of them seam to be wilting. So I have all the stuff for a DIY co2 system. Who knows of a good DIY write-up?

I tried this one... , I think it was pretty good except a couple of times I had trouble with the yeast mixture coming out into the tank and gave up on the CO2 idea. I found this has some information on a gas separator so this doesn't happen-
I had guessed before you had Wisteria but I am thinking it might be Water Sprite which is a medium light plant. And I am not really sure what you tall plant is.
I am interested in what other members say about putting CO2 in a low light tank. There is also the dosing option.
OP

My DIY co2 creator was easy to use thanks for the link kcarmartinez . I used a recipe I found online and I'm getting 1 bubble every 2-3 seconds.... that's not much I understand.