Soooo… have not posted much lately but been busy! I have removed a few and added in a few others very close to the way I think I want it set up.

40 breeder white sand - overflow tank with intent for just corydoras and maybe some guppies.
8 Sterbai corydoras tiny juveniles
NOT staying.
3 mutt rainbow babys - I can tell 2 female and 1 male. Have a little yellow/gold in the fins, they came from my mixed Austrians before they were rehomed. Soon as danios go they go to LFS.
5 pearl danios - moving to community


still a ton fish but spread out some and I think my school sizes are much better. The one 40 gallon breeder will only have corydoras in it so, could pop and Angel in there if I needed etc. eventually the solo Angel either Swap with or have the red rainbows added.

anything I could/should add ?

any down stocking I’m open to. I could reduce the species of rainbows, remove the shark, not keep danios, remove some all angels. Etc.

I love to add - whiptail catfish, more angels possibly (would have to go down a species of rainbow I think)… I want 4/5 in a 55-75 some day but all same sex so have to raise and weed out or hope mine have success breeding. I also really want guppies, but failed once and not sure where they could go. There are several small species of blue eyes smaller rainbows that interest me as well as black emperor tetras or similar ….. so many options.

love some thoughts feedback on where I’m at.

only real recent pic of the 20 with red phantoms 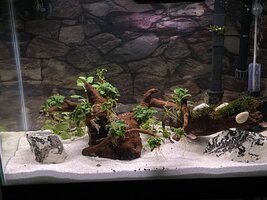 angels trying to breed - females get mad when it does not work out. 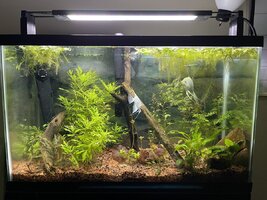 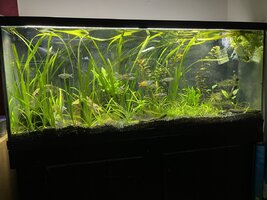 Culprits Journey Into The Dark Side