Question Could someone give me some background on kribnesis

I picked up 5 of these (hopefully 2 males and 3 females - though i suspect one of the females was misidentified and is male). They were mostly juvi - though one of the males is developing nicely.
-
The problem i'm having is they are shredding the corys to pieces. I have orange laser and pygmy. Two of the pygmy have died - two of the living pygmy have missing rear tails and at least one of the orange laser is missing its rear tails. The kribs (I think) are still too young to have actual territories - they just seem to enjoy being nasty.
-
So i think i need to take some sort of actions - esp given that the orange laser were not cheap - but i'm not sure what kind of actions i can or should take. Other than the toilet i don't really have any other place to put the fishes but i was wondering if there is something i could do landscape wise to discourage this behavior by the kribs. Conversely if i thin the kribs would that impact their behavior (thin means remove a male - and yes i could toss it into another tank that is too warm for it and let it fend for itself). 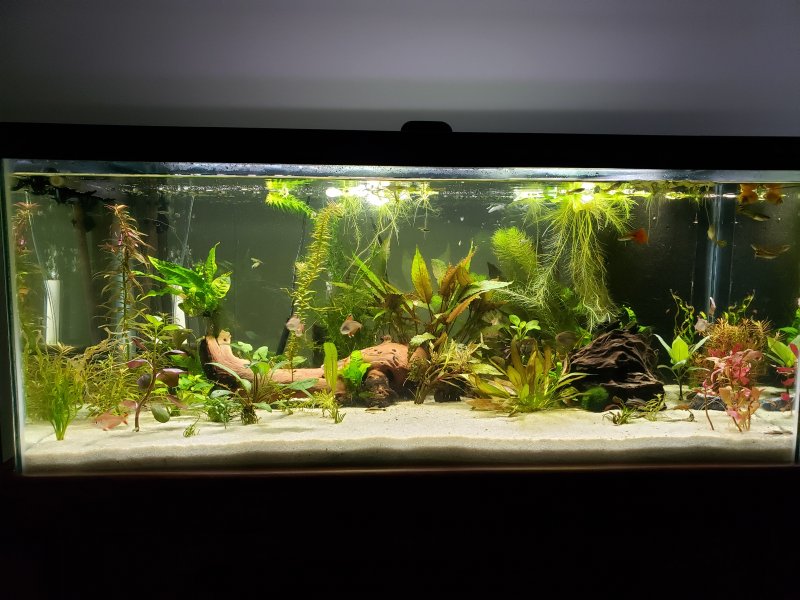 Mot sure specifically about kribs but i can tell ya that most cichlids are aggresive. Best option would be to separate them but it seems like there are plenty of hiding space there. I can imagine the corys going out to feed on the food that are on the sand and the cichlids attacking them. I would try adding some more woodwork as well as having a carpeting plant at the front as it looks to be very exposed. You could try having staurogyne repens for the carpeting plant as it is bigger and provide more cover compared to other carpeting plants. It is also very hardy and usually dense when it forms the carpet IMO. How large is the tank anyways? It seems pretty big so it makes me think that the cichlids are very aggressive for it to be chasing the corys around to their deaths.
J

the way to sex them is the female is smaller and fatter and in breeding condition her belly is bright pink the male is thiner and longer than the female with very little pink in the tummy they are cave breeders and should not be feed blood worms the food they eat is brine shrimp and flake food they come from Africa and are easy to breed but hard to sell the young , all so the young grow fast hope this helps u cheers john
OP
J

To be honest Kribs are the first small cichlids i have had that is aggressive. Rams, Angels, acara and aspitogramma - while they sometime bicker among themselves and protect eggs/youngs have generally not be 'mean' or aggressive to other fishes. These guys are not mature nor have they explicitly claimed territory yet - they are just mean.
OP
J

These were tanked raised by my local lfs; i'm wondering if that is why they are aggressive as they had to compete with each other for food. Aren't they mostly into greens ? I've been feeding them hirkai loach pellets and shrimp pellets - not so much greens but i read somewhere they prefer a lot of greens.
-
I have 2 confirmed males the other 3 I think are too young to make 100% id as female. They were picked out as females but i'm not 100% convince and I think one will still develop into a male. 'Cept for one male none of the 5 have much colouring yet. My guess is they have another inch to grow before they start to really colour up.
-
I'll probably have to thin them out a lot faster than i intended (i.e, reduce them to two) given how aggressive one of them is - conversely if i could spot which one is being a bully i could just nap it and that might resolve the problem.

I think Jdk246 got it right that when the cory come out at night that's when the krib are attacking them which is again not very territory oriented as the front area isn't a location one would claim.
-

For carpeting: I could try staurogyne repens but not sure how well it would grow - my reading is it prefers co2. Another plant i was going to try is Pogostemon Helferi 'Downoi'; but either wait it will take a while for it to grow. I did pick up some more drift wood this morning and after soaking it a day or two i'll test fit if there is a nice piece.


johnbetta said:
the way to sex them is the female is smaller and fatter and in breeding condition her belly is bright pink the male is thiner and longer than the female with very little pink in the tummy they are cave breeders and should not be feed blood worms the food they eat is brine shrimp and flake food they come from Africa and are easy to breed but hard to sell the young , all so the young grow fast hope this helps u cheers john
Click to expand...

Nothing in that tank will get bloodworms. They are welcome to kill each other; i just don't want them mucking with the corys.


johnbetta said:
green food is good for them but not to much wait till they fully grown if u have all males they will fight non stop I gave u the info on how to sex them once fully grown they do need meaty food to just not blood worms it ruins there gut
Click to expand...

There are implicit caves around the wood work. The tank is a 40B. I can sex them just fine when adults - ignoring colouring the females won't have the dorsal display finnage of the male. dward cichlid are easy to sex as adults - colouring is always risky since submissive males will pretend to be females and colour very similar to females - but they can't hide their body size or shape.
-
Yes if I know which one was biting the cory he would be gone in seconds - but finding him is difficult since they don't do it during the day and the pygmy do come out during the day - the orange lasers only come out at night.


johnbetta said:
very good mate its for there well being once your fish get bigger I will help u sex them but the one that is attacking the corys should be taken out do u have a cave in your tank and how big is your tank cause there is one option for the aggressive fish and that is to put him in a breeding net
Click to expand...