9 months ago I bought 3 corydora trilineatus (false julii) for my newly cycled 29 gallon from an lfs I hadn't used before with the intention of getting 3 more the next week. Once they were out of the bag in my tank and their color returned I noticed one was twice the size of the other 2 and was a dark grey color instead of the silvery white, but still had distinguishable markings of false julii.

I started noticing she (I assume "she" due to the larger size) never swam with the other 2 and stayed by herself on one side of the tank. A few days later I found one of the smaller ones dead with weird fuzzy mold looking stuff coming off of its head and the other one developed a swim bladder problem that eventually killed it. All this time my ammonia and nitrite remained 0, nitrates under 5, ph at 7 and my temp at 76.

I never went back to that lfs and the remaining odd cory is perfectly healthy to this day as well as everything else in my tank. I would love to get her some fellow cories, but I'm not sure if she is just an unusually dark colored false juliI or a different breed altogether. She didn't swim with the others so I'm worried that if I get the wrong kind she will still be alone. 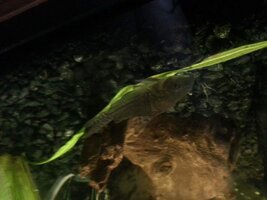 Sorry, I suppose a picture would be helpful!

I would probably guess at either a JuliI or False JuliI cory. I don't know for sure, the picture is a little dark. Try Googling cory varieties and see if you can find one that looks like it.

That's the thing... my picture isn't dark, that's the color my cory is. I've been looking at different species and I can't find anything like it.

It could be that dark due to the dark gravel. Also, that gravel looks a bit rough which can cause damage to barbels and may lead to infection. Try to switch to a pea gravel or sand substrate if/when you can.

Is My Cory A Julii's False Spotted?

How I Ship Live Fish