Member
HI , I bought these from a pawn shop, so obviously they’re not live. I wanted to put them in my 90gal freshwater. Just hoping to get some positive identification on the different types, so I know what they’ll do to my freshwater environment. Thanks! 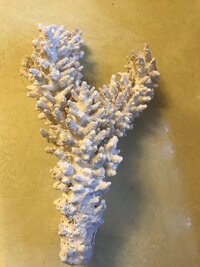 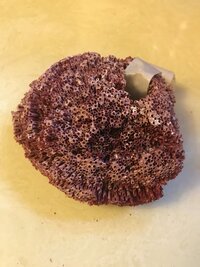 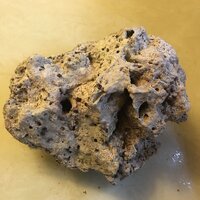 Member
Many coral species have similar looking skeletons, so it would be pretty impossible to be certain. However, pic #1 looks like a type of acropora, #2 looks to like it could be related to fungia.... and sorry, no clue on what originated #3 but it looks to be base rock, which, like it's name tells us, makes up the base of reefs. Base rock will be full of microfauna and things like beneficial bacteria. Without any real knowledge, I'd guess that some of that microfauna and bacteria are responsible for making the rock so porous.

I'm quite unsure of #2 but if it is indeed 'of the sea' it, like the others, is made of calcium carbonate, which can act as a buffer in water... meaning it will increase KH a bit. If there's a lot in comparison to water volume, you may also see a rise in pH. With these things in mind, know that it's the same stuff that's in marine tanks, and pretty harmless on its own.

To expand on maeh22 's post, you should probably cure the rock in water, with flow. When dry rock is exposed to flowing, oxygenated water, it will begin to leach dead organics. What are dead organics? The microfauna and bacterial organisms that lived inside it long ago when that rock was live. As with all organics, as they break down, it will lead to rising phosphates and nitrates. These are the leading causes of algae, the bane of most marine aquarists, lol. So, if the rock can be exposed to flowing water in a bucket, without light, the curing process can take place there. This means keeping excess nutrients out of the tank and limiting the growth of algae by not providing light. As NO3 and PO4 are leached in the curing container, the aquarist tests and changes water as needed. When tests show that NO3 and PO4 are no longer rising and levels in water will stay at 0ppm for both, the rock is cured.
Share:
Facebook Twitter Reddit Pinterest WhatsApp Email Link