Please use this topic to post your Congo tetra photos I'll leave it stickied so it appears at the top of the posts.

Please use your own photos, and not material from the internet.

Please post your photos as attachments, rather than links.

Didn’t see a thread just for pics. Here are a few of my boys. 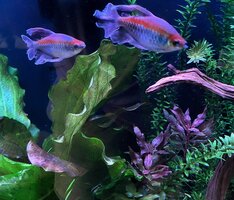 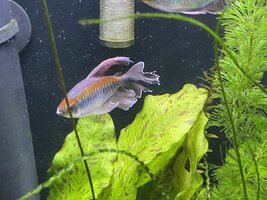 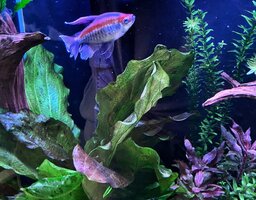 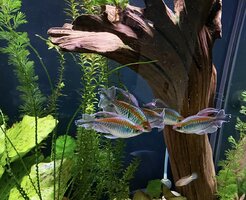 Having Congos in your tanks means endless opportunities for viewing ART… 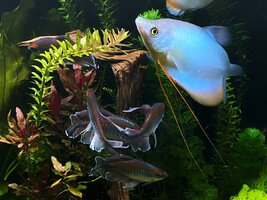 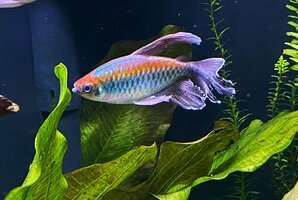 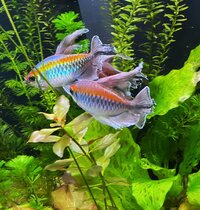 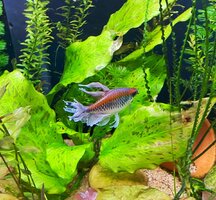 I really love the Congo tetra such an under rated fish , I keep 6 males 6 females atm

They are gorgeous! What size tank do you have and is t a species only?

They are gorgeous! What size tank do you have and is t a species only?
Click to expand...

They’re really starting to colour up I’ve added another female though because there are a couple of males that won’t let each others tails grow they test their pecking order a lot!. This is a 4ft tank but slightly more height than my other tank as these guys prefer that section of the water column. It’s not a species only, I’ve got a few different kinds atm , I really like the crytoheros I’ve got a pair of t-bar sajicias, myrnae cichlid a pair of rainbows. Red breast acara, electric acara and a polar parrot.

my plan is to move the polar parrot and acaras to my other 4/5ft tank who’s got my golden saum in (he’s not very forgiving so I’m not even attempting Congo tetra). So congos tank will just be crytos soon which is a nice contrast
I’m not sure if anyone else has found this but my congos are really interactive they don’t shy away at all and will come and have a look when you approach the tank. I really love the colours of the females too. It’s hard to capture on a picture but they really sparkle just as much as the males but more greeny colours. They are fun to feed too … rapid!! So I have to feed at two ends of the tank

Thank you for the info, sounds like beautiful setups. Congo Tetras are on my bucket fish list. Unfortunately I don’t have the space to accommodate them now but I do have MTS so probably soon.

Thank you for the info, sounds like beautiful setups. Congo Tetras are on my bucket fish list. Unfortunately I don’t have the space to accommodate them now but I do have MTS so probably soon.
Click to expand...

Aw Thankyou , What do you keep at the moment ? I want to complete the cryptoheros genre then I’ll leave the tanks alone. I did have a panemensis but he mustn’t have been healthy when I got him

I don’t think this is the right thread for a convo but I have no idea what I should be doing about it. Maybe someone will hop in and tell me and maybe a moderator can move this thread if necessary.
Now to answer your question. I’m fairly new at this, started this past Summer. I have 3 tanks at the moment my first setup is a 37 gallon high that is the home to 3 pearl gouramis that mostly use the top part, 8 rummynose tetras that like the middle, 2 Bolivian rams female and some Panda and Pepper corys.
It’s heavily planted, no CO2, hbo and sponge filter. The second one is my Betta in a 5 gallon also planted and now I’m working on a 15 gallon Fluval Edge, I’m preparing it for Celestial Danios and different color shrimps. You will see the Fluval was the Betta’s tank before I moved him to the smaller one, it was too far for him to swim all the way to the top for air.