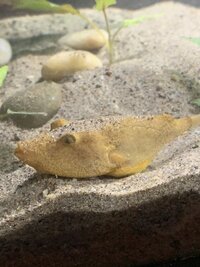 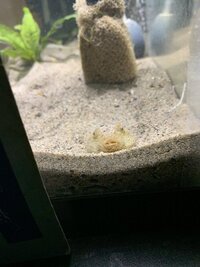 picked this guy up at a local fish store, they had him in a 5 gallon with gravel
2-3 inch puffer(I’m bad at accurately guessing lengths but he seems small compared to the youtube potatoes out there.)

1.The past few days instead of ghost shrimp and feeder guppies which is the fish stores suggested diet.
I have had him on a diet of cooked-unshelled deveined for people shrimp from Walmart) dipped in brine shrimp and fish flakes and cut into manageable pieces to avoid giving him an illness through feeder fish
I have raw oysters to try as I have heard cooked shrimp has less nutrients,which I tried to replenish with the brine and fish flakes he ate twice the first two days until his belly was fat and only once today.
Is this a sign that he is losing his appetite? Or a sign that he figured out I’m not giving him living food anymore and is no longer interested in what I have to offer?

If it’s a symptom I am currently treating it, but if he just doesn’t like the food I am giving him I will switch back to store feeders until I can get my own personal feeder guppy colony established(currently have thirty or so guppy fry)
But my lack of experience with puffers and the lack of info about the Congo puffers in general on the internet makes it difficult for me to know which.

2.I understand he is an inactive fish, but the first few days he was relatively active (exploring the tank, observing me, Actively hunting the feeder shrimp and guppies burrowing in the sand)
Today after work he just sat burrowed in the corner and only took a few bites of the shrimp I gave him.

Is the lack of activity today a sign he is settling in As a normal fat potato fish would? The symptom of a yet to be indentified water issue?

3. What is a “normal” breathing pattern for a fish like this? I try to watch the breathing of all my fish because they will breathe really fast/really slowwhen scared or stressed /sick
Puffers seem to naturally take bigger breathes than the average fish but since I’m new to puffers I’m not sure if I should be happy that he’s breathing normally or concerned he also holds his breath around prey so it makes sense to me that sometimes he would breathe a little fast to store up oxygen/ catch his breath.

Just to get everyone up to speed the puffer is in a fully cycled 10 gallon
Ph 8
Ammonia 0
Nitrite 0
Nitrate 5-10
He’s just in to start preventative medications because I don’t wanna use 3x the medicine(as I would be doing in his minimum 30 gallon required tank). Paragaurd for now (online ordering apI general cure for the future)and I have arythromycin but I don’t know how to use it or exactly what to use it for (more research required) After that I may treat for worms( still working out whether Paraguard does that or not)
His water is tested every 12-24 hours

He’ll then be moved to his thirty gallon home which will be pretty much the exact setup (substrate/plants/placement) of his ten gallon but bigger to help It be familiar I guess?

Any help or tips anyone has on the normal behaviors of ambush puffers would be greatly appreciated and I will attach as many pics and vids of my little buddy as possible I do not think he is sick or there is an emergency of any sort but I also don’t know what is “healthy behavior” as I am very new to puffers, especially ambush ones but I couldn’t just leave this little fella in a 5 gallon all his life. Thanks all
Ps
He came home from the store with the missing top tooth and his name is buckwheat 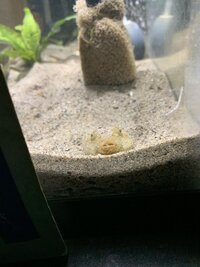 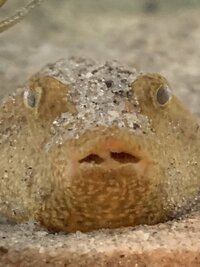 update I switched him back to feeders and he perked right up like he was days before. Anyone with any info on keeping Congo puffers IE how much to feed them (2 ghost shrimp?3? Twice daily? Once daily?) and normal tank behaviors and the like please respond. Perhaps even if you just own an puffer that is also an ambush hunter like a hairy puffer or the like you may also be able to suggest a good diet even if you don’t know the specifics of the Congo puffer.
Until then I’ll do my best to feed him enough and not over feed/ monitor him and learn how he acts normally