Coming Home To A New Guppy

No, this isn't a surprise my guppy gave birth post. In fact, I'm incredibly impressed that none of the guppies I have gave birth while I was gone. I was in the US for the whole of September, and had someone oversee my tanks (I have 3 regular tanks, 3 grow out tanks). I'm more confused about the color development of the guppies I have.

Before I get to the question, what happened was I acquired 4 females from a person and I traded them for my 2 males since they were getting bullied by the other male that I still have. They're in a separate tank, because I didn't want them to breed. I didn't know the females I got were pregnant, and the more I've read the more I should've expected that. The first drop got eaten and only 6 survived. The next drops didn't get eaten at all (even by the betta that lived with the females), and I now have over 100 guppies.

I tried to ask the person that gave me the guppies what they were, but he simply said that they were half blacks and yellow tails; they've been AWOL since he handed me the females. I have a prior thread asking what color the other set of females were, because I was kinda sure that this set was half black yellows based on the females. Well, I was wrong.

This is my 3 month old male from the first drop: 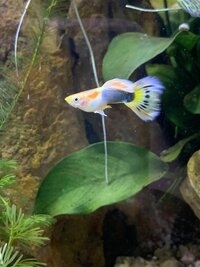 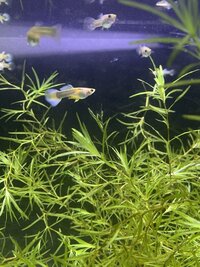 These are his currently almost 2 month old siblings from the same female. I should've considered the orange markings on him to be a foreshadowing of some sorts, but I'm generally new to fish keeping (I started last year, I'm in the hobby for plants). Clearly, they're not HBY, but seems to be a pure strain cause the bigger ones are all starting to get black spots on their tails as well.

Does anyone know what color strain this is? The closest looking one I found online is from this article:
Guppy Article - Gold MultI Development

It does mention having red markings on the body on some of them, but my guppies aren't gold or doesn't seem like it. I have a gold cobra male, but I highly doubt he's the father and absolutely none of the drops have any cobra markings (the male has snakeskin on both body and tail).

I can’t be of much help but that is one beautiful guppy!!

I can’t be of much help but that is one beautiful guppy!!
Click to expand...

He has lovely coloring and patterns! I don't know what type he is, either, but it should be interesting to see if the other males turn out as pretty as him.

Aug 13, 2019
emeraldking
Can Make Guppies Override The Sperm Inside Ththe Female From A Different Male?