Columnaris or something else?

A little hard to see but this is the fish has what looks like a thin layer of fungus over her face and fins. I've quarantined her plus two other fish (one of whom since died). They all had fungus on their faces. Also on their saddle area. The quarantine tank is at a lower temp (24C), salt added and kanaplex treated. I've also added kanaplex to their food but 3 days later the fungus has spread rather than improved. Any idea if this could be something else other than columnnaris? Also, should I feed the kanaplex to my main tank as a preventative measure or wait in case I see more affected fish? Thanks in advance! 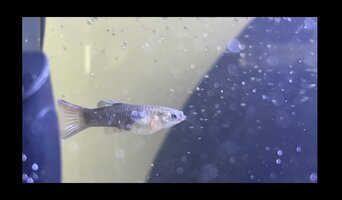 It's a bit hard to tell from the photo of what's been going on. It would be wise to put her separate from other fish.

It's a bit hard to tell from the photo of what's been going on. It would be wise to put her separate from other fish.
Click to expand...

Thanks! She is already separate from the main tank. I quarantined 3 fish with the same symptoms. One gave birth then died. So I have two fungussy females in a tank with 5 fry After 3 days they don't seem to be getting any better so I'm just concerned I'm using the wrong meds. Or am I just being impatient?

Or am I just being impatient?
Click to expand...

Give it some time...
You must log in or register to reply here.

Oct 3, 2018
Betty Lou Lanagan
Is something wrong with my guppy?

Jan 15, 2020
RedLoredAmazon
I Need Help With White Mouths On Corys

Ammonia Instructions when Cycling with TSS+