Is anyone familiar with goldfish? I have a very curious comet...had it for years now

When we got her she was golden mottle, and we named her "Goldie" she lived in a 29 gallon tank with her partner until this year, when I decided that they needed more space and arranged to add them to my dad's pond. About APril, she started losing her gold...turning white in about a month. No illnesses or anything, and she ate well. She lived in the pond, and came back to me with her pond-mates to be wintered.....that's when I noticed her colour changing again....she's going yellow in her head, dorsal fin and tail.

I'm not worried about her, she's as much of a pig as always, and still very social....but I don't see anything on google about colour Returning to a fish after it's whitened, so I am curious

To my knowledge, she's about three years old? She was in my dads pond before he gave her to the kids, so I can't be sure

She's okay. Most goldfish change colours as they age. I had a silvery comet (platinum) and he turned gold

As my gold fish aged her fins got extra long and it looks like she has long fluffy paddles. 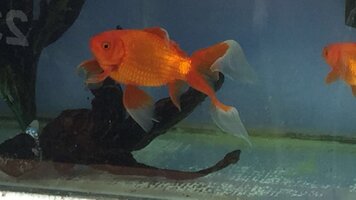 As my gold fish aged her fins got extra long and it looks like she has long fluffy paddles.

Clearly has some fancy gold genetics in there.

But yes, it's normal for goldfish to change color. Koi are an invasive species through much of the world, and they're known to lose their fancy coloration in as little as one generation and revert normal carp coloration.

Yes, I do know about their carp backgrounds..there's a lake in u.s. that was overrun, and carp driven out, after goldfish were released. The one they caught was as big as the reporter's arm. That's a great example of the "goldfish grow to their environment " theory too, because clearly the fish took full advantage of its new home....very impressive specimen

On a smaller scale, the story opened my eyes to just how big Goldie could grow, and it was that which prompted me to start looking for a pond for her. My dads comets, her pond-mates, are about 6inches or so to her 4-5....she grew over the summer too

Goldfish aggression? No idea what to do.