Member
One of my platy fish, the little silver mikey mouse, is clamping his fins really tight.

He has never been as relaxed as the rest with them, I think, but it is harder to tell as they are almost transparent. But he is definately claming now. I've had him since the 11th August and he used to be more like this at least some of the time:

But now he is like this most of the time: 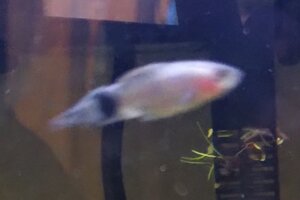 and for comparison with the others: 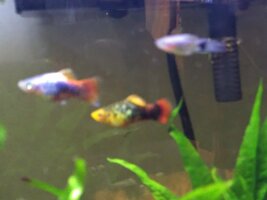 Sorry for the poor quality pics, they were the best I could get. He doesn't like to stay still for photos. The pinkish colouring was always there in direct light, the older picture is in shadow. He also looks less pink and more blueish in person. He doesn't seem to be pineconing, his belly isn't swolen, he is balanced in the water and swimming about fine, he's also eating fine. Everyone else seems healthy.

The only difference is that he and the other juevenile seem to be spending less time together out and about in the tank since the older sunset got a new friend (also in the picture above) and those two started to spend more time out in the middle of the tank.

Could he be being bullied when I'm not about? or is he likely sick? 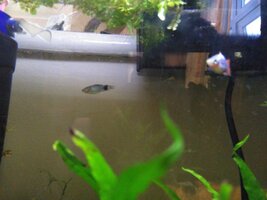 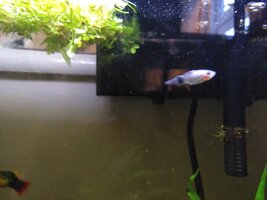 Member
Hi Lilthuglet,
In my opinion the fish is going down hill?
As you say it was clamped some of the time but now more and more.It looks a little thin?

What I would do and am doing to almost all new fish. I deworm fish as a normal part of a routine. Not every 2 months as the manufacturers suggest but often . Certainly all new fish get the treatment. I can’t tell you to treat your fish . Some would say not to treat a fish if you don’t know what it is. Then you must wait until it dies and get someone with a microscope to tell you it had worms. By which time the other fish have been in a tank with more worm egg than they already have?

I can only suggest you treat for internal parasites. ( worms) These are very common in live bearers.
Having lost fish myself when I started in the hobby and did not deworm for 3 years. Clearly it’s your choice. I can say that by following the instructions I have not killed fry ,snails ,plants ,shrimp, beneficial bacteria or fish. Wash your hands the instructions say.
Tablets are convenient but expensive.
Powder is cheap but difficult to measure.
Liquid is my go to. 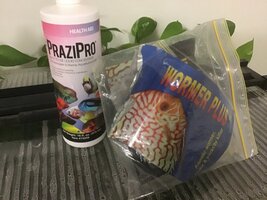