Cinder block pond build - So I'm building 2 of these, and I have one mostly done. The second one is going to be perpendicular to this one on the same concrete slab. This could be done in your yard if you poured a basic footer first. My first step after calculating materials was cleaning off the area. I stacked the blocks ahead of time and saw what it was going to look like, then adjusted the dimensions a bit to make it work better for the area I am using. My initial plan was to have it a lot wider, but it took up too much of the concrete slab and I wouldn't be able to make an equal sized one next to it. I also wanted to have a little bit of space to put a small table and chairs since this is on my back patio. 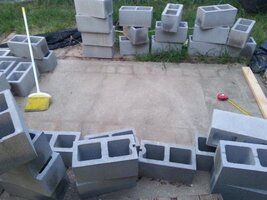 The next step was put some concrete down and stick the first row of blocks to it. Not really rocket science, but I do suggest lining them all up like you want them FIRST, and then moving them out of the way one by one as you are cementing them into place. This avoids any potential lineup issues as you work your way around. I did not want to deal with the hassle of mortaring each individual block (mostly because I have no experience with it, and it looks a bit tricky and time consuming). So I dry stacked them like this. 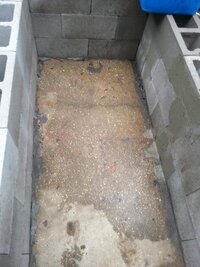 I used Sakrete surface bonding cement to then cover the inside and outside of the blocks. This was a little laborsome on the hands but only took a trowel and bucket. 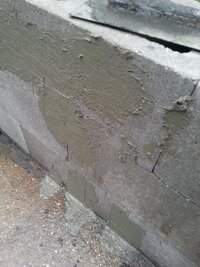 The inside went off without a hitch, midway through the outside covering though it began to rain, and the rain washed away a lot of my work. So I waited another day, and then started again. I mixed this batch with some charcoal concrete dye. 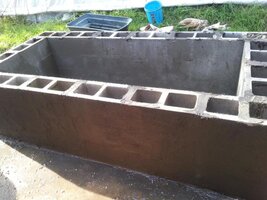 To add a little bit of rigidity, I also bought a few bags of concrete and poured them into the corners. I intend to get another 2 bags to pour into every 3rd or 4th hole. 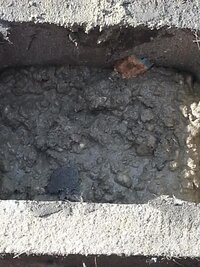 I let it cure for a few days, and then put a liner in. I opted to use a basic 5mil plastic sheeting from tractor supply. This is primarily because I already had it on hand. If it springs a leak then I'll switch to a real pond liner. 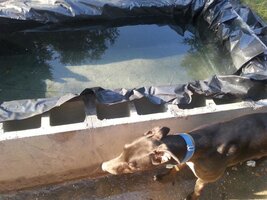 I'm planning to put some 12x12 natural stone (probably slate) tiles along the top to cover the edge of the liner. Otherwise I like the way it turned out. The gallonage calculated to around 250ish. It's only 2 feet deep, but the goal is for aquatic plants and not koi or goldfish, so I think it'll work fine. I've considered a few different methods and this is the one I settled on, and so far I like it. Total cost was around $120. 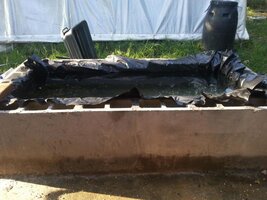 Hey! That's a lot of bang for the buck! Looks really nice!

Thanks! Driving to Tennessee today so it'll have to sit till at least the end of the weekend. My next step is to cover the liner, and then start working on a filter. The filter is going to be a skippy style 55 gallon drum sand and rock filter.

Should I Build A Pond For My Koi?

Yesterday at 3:42 PM
Chewbroccoli
Trying To Build A Diy Pond/waterfall