I picked up a group of 5 young Cichlasoma dimerus early this year at my local aquarium club auction. I placed them in my 65 gallon semi-aggressive community tank. The tankmates include a group of hockey stick tetras, serpae tetras, a few Amazon puffers, a group of panda corydoras, and a couple of hillstream loaches.

Two of the five are staying small, bland looking, they just aren't growing or coloring up.

Three of the five have gotten a good bit larger and are coloring up. I think of those three big ones, one is a dominant male, one a lower ranking male, and one female.

The three bigger ones have been coloring up nicely. The dominant male and the big female have started hanging out as more of a "loose" pair, showing some bonding behavior, and chasing off the other cichlids. The lower ranking big male is getting a little beat up.

So I started conditioning them this week with some rich frozen foods, did a big water change. If these turn out to be a pair, I'm likely to soft reboot the tank for this pair to breed in without competition or fry snatchers around.

The video is terrible. Not sure why my iPhone kept losing focus. Here's a better still of that male. 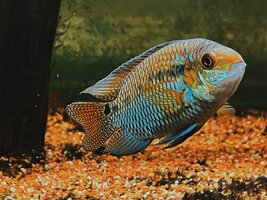 Nice! I don’t have experience with Cichlasoma dimerus but I have a pair of C. amazonarum which are probably similar. I started with 3 that I got by mistake, I had ordered Keyhole,cichlids! I ordered 4 but one was nearly DOA. When a pair formed I had to rehome the other one as it was getting beaten up. The male grew much more quickly than the other two, and was considerably bigger when they bred for the first time. On this occasion they were in a tank of a similar size to yours and there were some Apistogrammmas in there at the time, though I had earlier removed the smaller tetras and pencil fish as they had started to go missing and I strongly suspected the Cichlasomas. Anyway they were amazingly good parents and most of the fry survived. As did the apistos as they had plenty of hiding places. On the second occasion I had moved the pair to a separate tank, and they raised a lot more fry, but this time the clutch of eggs was much bigger to start with. On this occasion though, the male started attacking the female not long after the fry were free swimming, so I moved her back to the original tank, with some small festivums and one of the original apistos. The male reared the young alone and never started eating them even long after he lost interest in defending them. And the female started to grow a lot more and is now the same size as the male. I don’t really want to get any more fry from them as although two shops took them they have not been able to sell many, they are not very popular for some reason. There is a thread about mine here with photos, in case you are interested. Cichlasoma amazonarum spawned again today - photos | American Cichlid Forum | 492381

Another quick video of this male. He's really coming in nicely.

I'm building out a muscle rack right now. When it's all set up, these cichlids will get their own tank, until I'm sure I have a pair... then I'll rehome the other dimerus cichlids.

Nice! I don’t have experience with Cichlasoma dimerus but I have a pair of C. amazonarum which are probably similar.
Click to expand...

Oh yeah, they look quite similar. Don't they?
You must log in or register to reply here.

Wondering how I can improve my Cichlasomas’ tank