Hello! This is just a build thread for my (relatively) new tank. It's been going for around 3 months, I think - I started with the idea of having just one Figure 8 Puffer, but found the tank far too similar to my Green Spotted Puffer tank. So, I put in a small female guppy, just to see how he'd react - and he didn't give her a second look, even when she was eating on his clams during feeding time. So, I decided I'd do a lightly-brackish community tank, and plant it with some salt-tolerant plants. 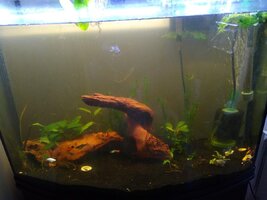 I chose a coarse sand for the puffer, since they like to blow the substrate around while looking for food. I went with black to highlight the green on the puffer’s back, and the green/black combo with the plants is always nice too. I used two pieces of Mopani to “scape” the tank - I stuck them in there in a position I found pleasing and called it quits. I’ve never been much of a scaper, lol.

Once I found that the guppy did well with the puffer, I added a male and a second female. Then, a week or two later, I added a trio of platies. The tank was still freshwater, as I figured I’d just acclimate the whole tank to low-end brackish once it was stocked to make it easier on everyone. At this point, I noticed that the puffer had come down with a little bit of ich, and one of the platies had some spots as well. So, I went ahead and began increasing the salinity of the tank, and that took care of the ich after around 8 days. After the ich was taken care of, I introduced a trio of balloon mollies as well as around 8 ghost shrimp. I expected the shrimp to be hunted down in a few days, but the puffer doesn’t really hunt them. He ate one when I dumped them into the tank, but I think he figured out they’re hard to catch, and I keep him well-fed enough that he doesn’t have a chance to get hungry enough to try too hard. The shrimp still give him a wide berth, but spend plenty of time out in the open. They make great additions to the tank.

A few days ago I added 4 Black Racer Nerites, as I was getting some algae on the glass of the tank. Nerites are one of the few snails that I know of that’ll do well in brackish and have a small enough foot that they can protect it while they’re stuck to something. One of the snails didn’t make the acclimation, unfortunately, but the other three have done well. The puffer pays a lot of attention to them, but I haven’t seen him pester them too much. Today, I added in a trio of Limia Nigrofasciata, the Humpback Limia. They’re roughly as brackish-tolerant as platies, and I was surprised to find them at my LFS. They’re a common Limia, but definitely still pretty rare in your average LFS, I’d say. I ordered 8 Bumblebee Gobies, and they’ll be here on Thursday. I’ll be done with stocking after that - I probably went a bit heavy, but I think it’ll work out fine with how heavily I’ve got the tank planted, and how I tend to maintenance my tanks.

Everything except for the Pothos is doing well so far, although I may get rid of the Anacharis. I like the plant, but it’s just so hard to keep planted! It’s almost more trouble than it’s worth. I’m always looking for more brackish-tolerant plants, too, so if anyone has suggestions, hit me up! I especially love Crypts, but am finding them to be incredibly slow growing under brackish conditions. All the plants are growing slower than they do in freshwater, but the Crypts are especially slow - I did start with small plants, but still.

The tank is filtered by an Aquarium Co-Op sponge filter and an Aquaclear 50, but I plan to remove the HOB once the tank is more established with a few more plants. Don’t need the HOB sucking up babies! I just have a generic Top Fin heater in the tank right now - I’d like to get a nice Fluval or Aqueon heater, once I can find the models I want in stock. For lighting, I’m using a 30” Finnex Stingray, and plan to stick with that light. I love it! It’s perfect for that low-medium light range in this tank.


Maintenance in this tank consists of weekly 50% water changes, and the occasional glass scraping. Frequent re-plantings of the Anacharis have been a requirement, too, and I need to whip out the super glue and attach some Anubias to the driftwood more permanently - I’ve just been lazy. I have some sponge and cuttlebone in the HOB, but haven’t been running any chemical/physical media. I may add some carbon to help with the tannins, but I’m undecided. I don’t especially hate the tannined look, but I’m not necessarily a fan, either.

So far, this tank is just fun for me. I love seeing how organisms react in situations we may not necessarily expect them to be in - plants and the common livebearers in salty water, for example. I bred some guppies in full saltwater, and had a blast with that. I just kinda play with this tank, and of course love the Figure 8 Puffer, the reason the tank even exists. This one is actually fairly brave, even compared to my larger GSP who tends to flip out if I approach the tank too quickly. I do a lot of saltwater tanks, and have several breeding projects going that tend to be a bit higher pressure, in a way. Plus, I work at a pet store, so I’m around tanks 24/7. Having a tank I can just enjoy is a nice change of pace!

I'll be sure to post lots of pics and vids!

I love puffers too, within a few months I went from my gateway puffer (pea puffer) to figure 8s, then a GSP, and before I know it there's a fahaka in a 150 gallon tank in my living room!
Click to expand...

Man, fish keeping is addicting! I already want pea puffers a month and a half after getting my 29 gallon community
Upvote 0

I love puffers too, within a few months I went from my gateway puffer (pea puffer) to figure 8s, then a GSP, and before I know it there's a fahaka in a 150 gallon tank in my living room!
Click to expand...

I will have a long-term fahaka one day! They're awesome, although I'd have a tough time deciding between a Fahaka or a Dogface... Oh, to have a 180!
Video just went live!
Upvote 0

So, I thought I'd post a quick update on what became of this tank.


I had to remove all of my fish and tanks from my apartment so that it could be treated for pests - the pest company used tear gas as part of the treatment, so I couldn't simply cover the tanks and keep them in here. I ended up losing a lot of fish, unfortunately.


Instead of keeping these guys in a 36, I decided to rehome the majority of the surviving livebearers and move the tank into a 20 long - I only kept 3 molly fry and (accidentally) 1 platy. I plan to rehome any females I get, and just keep a few males in here for variety and activity. I kept the puffer (of course), and all of the BBGs, as well, and ended up with a fairly decent stocking, IMO.


I'm not using any live plants this time, although I'd like to revisit it in the future. I actually found a baby Crypt Wendtii growing in the 36 behind all the wood, several marimo balls, some anacharis, and a few bits of moneywart, so it seems that some individual specimens had rooted and were growing to some extent, However, as a whole, I'd say that the plants definitely did not thrive in this case. Instead, I've opted to use some silk plants. I'm not a huge fan, but it gives some cover for the fish and some decor for me to look at. I also used some dragon stone, instead of the driftwood, to try and avoid all the tannins in the water this time.

Super Secret Meeting of the Gobies:

The puffer has an eye infection, unfortunately, so I'm starting the tank on erythromycin to try and help treat that.

imgur.com
Upvote 0
You must log in or register to reply here.

What type of salt for brackish tank?

How do I start a brackish tank?