So after 4 of my gold zebra jumped out (i had 7 - and one jumped out - ok it happens; but then 3 weeks later 3 of them jumped out in different locations - after which i purchased some fiber glass screening to cover every nook and cranny so hopefully no more jumping out).
-
Anyway I purchased 5 gold zebra and put them in 29 to 'qt' and let them grow a bit larger. After 3 or 4 or maybe it was 5 weeks i decided to move them in with the other 3 in the 120 - catching the first one was easy - he just climbed into my lap. catching the second was almost as easy he blinked and i snagged him. Catching the third was via bait put the food in wait for him to come to snack and snatch em. Ok now 3 days later number 4 and 5 are more cautious - now i bait the net and number 4 fell for it - went into the net and caught him. Now number 5 is extremely cautious noticing all his friends vanished. 5 days of baiting water bottles and nets and the clever little devil avoided all traps - caught 30 guppies and 10 sword tails and even a kuhli but no gold zebra. Ok i see where he is hiding but i don't really want to tear the entire tank up to get him - he's under the drift wood which has plants on both sides but the drift wood doesn't quite allow him to flee to the other side of the tank (there is a bit of dip where he hid); use my finger to chase him out - and drat he doesn't go to the net instead he runs across the tank looking for a new place to hide. He spots the coconut shell and dashes in there. Bingo! put the net over the coconut shell opening and snag him. He thinks it is all over end of the line. Toss him in the 120 and he notices all his vanished friends - does he hide - no - he quickly joins his friends and starts dancing in the open. Now when i walk over to the tank instead of hiding he goes to the top waiting for food to hit the water.
-
2 lessons: if you snag one gold zebra you better get the rest fast because when they realize they are alone they are gonna hide;
when they find their friends they do the dance of joy after all gold zebra are social critters and love having friends to dance with.
--
And since he is no longer running away from me i can put the phone next to the tank and snap a picture (is the higher of the two): 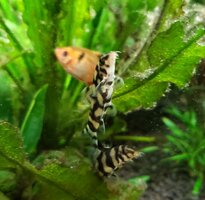 This is the tank he was hiding in - i really didn't want to tear it up and taking out the driftwood would have been difficult because there is a lot of unglued stuff growing on it and around it. There are actually two horizontal piece the one he liked to hide under was directly behind the aponogeton. Really shouldn't have it put it in front but hey it was a tiny plant when i planted it... pretty plant too so i left it in front. 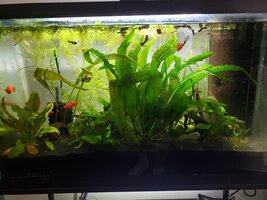 The trials & tribulations of fishkeeping! hehe least you have a really nice pic now though for your troubles