I am planning on setting up a cardinal tetra biotope in a 180 litre tank. Possibly with a pair of rams as well as I read somewhere that they can be found together.

Originally, I was planning on using Fluval Stratum as a substrate as it lowers PH. I have PH from the tap at 7.2 so want to lower it to suit the cardinal tetras and rams. However, I read that the most natural substrate for these fish is sand. From what I know of sand though, it is going to raise the PH if anything. Is there anything I else I could do for a substrate or are there any sands that lower PH?

I know that adding almond leaves will tan the water and reduce PH to an extent but will this be enough?

Also, what plants are there for this biotope?

I keep cardinals and corydoras in a tank that is trying to simulate the biotope.

The habitats of cardinals and rams don't overlap in the wild as far as I know, they are still often found together in aquaria, because cardinals can bear the higher temperatures rams need.

There are actually quite few aquatic plants in the natural habitat, because cardinal tetras leave the actual streams and creeks in the rainy season for the flooded forests. If any you would likely find plants like amazon swords, vallisneria, frogbit and cabomba.
I have in my tank some plants though: Vallisneria are to be found all over the Americas, also I have Amazon frogbit, which can be found all over the Amazon basin. It helps very much as the tetras like it quite dark. From the early stages of the tank I still have several (actually african) Anubias I can't really get rid of, because they still help regulating the nitrates.
The substrate I use is common aquarium sand, the driftwood is spiderwood, the rooks are only 3 random rocks I use as foundation for the wood. Rest plants and dead leaves.

About the pH: You don't have to go further down than maybe 6.5, except you want to breed them, which in my opinion is near impossible without a special setup in a darkened room and several tanks for the parent fish, fry and eggs. If your tap water has a medium to low hardness you can get the pH down with IAL, botanicals, maybe blackwater extract and root wood easily to the mid-6-level, without using any synthetic pH-downers, RO-water or other chemicals. 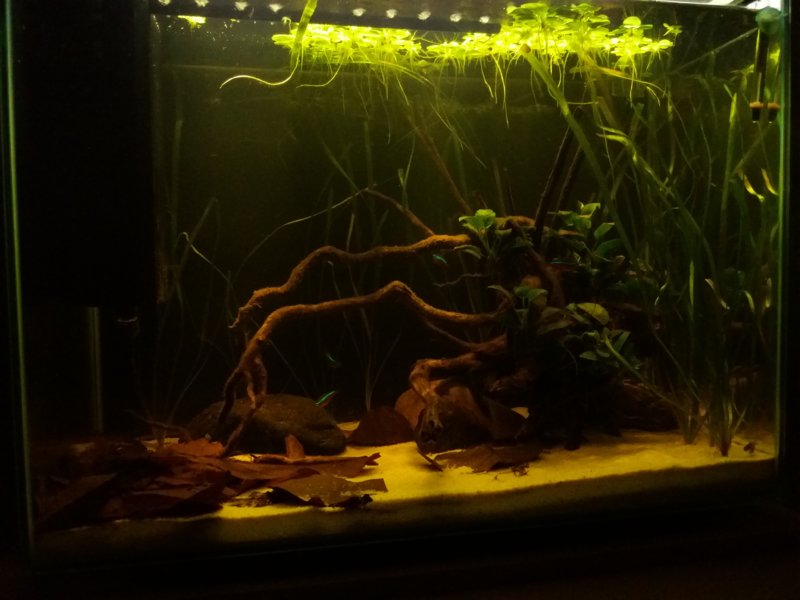 As you can see, I have put in a leaf bed, that I cultivate for extra biological filtration and tannins, 50% IAL, 50% native european trees. detritus and waste are being accumulated by the water flow in there and broken down.

And yes, right now I only have 4 cardinals. I kept Otocinclus with them until January, that left some nasty parasites the cardinals got each time they scavenged on an Oto-carcass and the last loss jumped the tank. I'm not sure if I'm going to stock them up again, but right now they don't seem to be in bad shape, so I will keep them until their eventual demise.

Maintenance is easy: Once a week 50% waterchange, redosing blackwater extract with each waterchange, 1-2x a month adding more leaves and removing rotting leaves the frogbit and the vallisneria lose inevitably regularily. No substrate vacuuming, though, that stuff accumulates in the leafbed and is broken down by worms and such.

Hope I could help.

Edit: Here some videos showing their habitat in the wild.


Btw: I opened up the sand so the cories can dig around. Originally the ground was completely covered in leaves.

Thanks for the info. That’s really useful.
Would any of these sands alter the PH And would it be the right colour?

Would cabomba be difficult to grow in a black water aquarium because of subdued lighting? What about helanthium quadricostatus, are they found in the same waters as cardinals?

I have a high KH and Gh alongside my PH of 7.2. Is it possible to naturally bring down this PH to 6.5?

Colourwise I guess it's ok. PH-wise... Honestly, as long as you don't get coral sand, the pH shouldn't be altered.

Both plants are found in the Amazon basin in general. If they are found alongside Cardinals I actually can't really tell. If it works with blackwater, I can't tell either. Cabomba I only had in non-blackwater tanks, and I never kept Helanthium.

How high are your KH and GH? With a pH of 7.2 I suppose 6.8 to 6.6 is the lowest that's possible without using RO water if you have hard water.
OP

I’m currently using API 5 in one test strips and to be honest, I find them quite difficult to read with 100% accuracy.
The water in my tank is:

The API strips are known to be bad quality, you can stick to strips, but maybe switch to sera, jbl or tetra. API also has weird steps in their readings, the others have better intervals that make more practical sense.

Yeah, the hardness is relatively high. You can try peat in the filter or blackwater extract by amtra (oak extract) or tetra (torumin). It should be possible to bring the pH down to mid 6 that way, but if it doesn't you would likely have to work with partial RO waterchanges, which would either mean you have to buy an osmosis reactor or buy distilled water regularily. The former is cheaper long term, though question is how big the tank is supposed to be and how much it is worth to you.
You must log in or register to reply here.
Share:
Facebook Twitter Reddit Pinterest WhatsApp Email Link