Can't tell if Betta Fish is old or sick

I have had a betta fish for about a year and a half in a vase with less than optimal conditions. I moved him to a 20 gallon (cycled) tank about a month ago and he has never been happier. Within the last two days, he has suddenly started laying down all day and only comes up for a gasp of air every once in a while and is only using one of his pectoral fins. Checked water conditions: 0 Ammonia, Nitrate, and nitrite, and pH of around 8.0 consistently since I put him in. I have live plants, plenty of decorations and he has more houses than I do. He has some fish friends too that are not fin nippers. He has been eating great and eats along with the other fish (so long as they keep their distance or face his wrath) and he has no swelling to indicate overfeeding or constipation. He had fin rot when he was in the vase, but has been recovering rapidly. 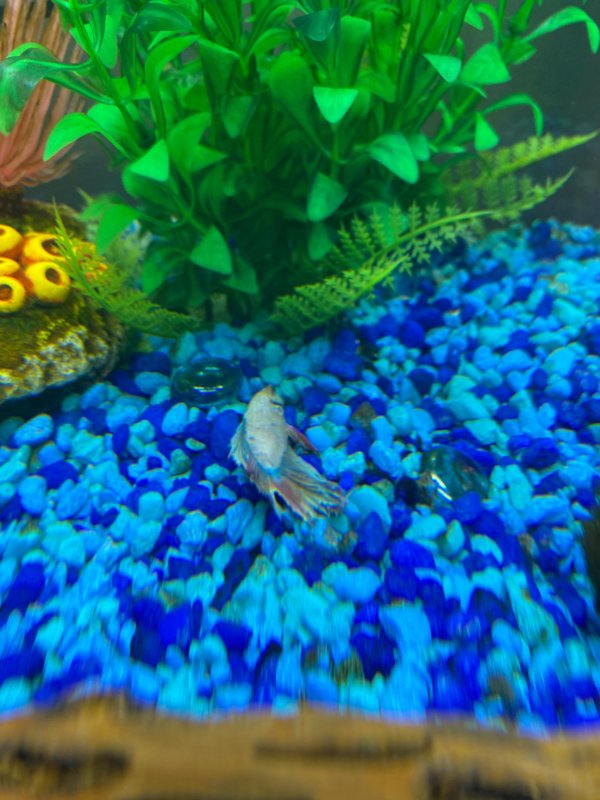 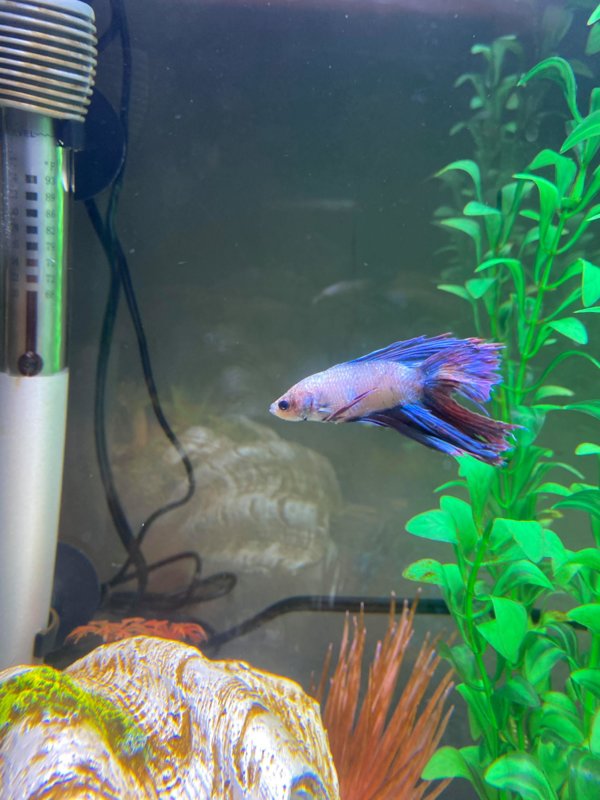 Your tank needs to be heavily planted to have 0 nitrates in a cycled tank. All i see is mainly fake plants and having zero Nitrates isn't good. Also your pH seems concerning at 8.0. Ideal pH for Bettas is exactly 7.0 , 7.5 at highest. Whats your pH in your source water ? I would add in some Indian Almond Leaves and roobios tea to help release Tannin. It naturally lowers pH , and helps promote fin growth.

Also what are the other tank mates ? And what is his exact feeding schedule? How often, how much , what food , and are you pre-soaking his food?
OP
O

I have a small cluster of anubias on the right corner, but the zero nitrates might be due to my very recent (yesterday) 30% water change and vacuuming as well as my bias when it comes to comparing vials to color indicators. I condition my water from tap, so I can't really explain the high pH. I feed very small amounts of fish flakes (freeze-dried bloodworms every once in a while as a treat) in the morning and at night since my tank mates (neon tetras and silvertip tetras) are opportunistic feeders and he eats along with them. I've watched him eat and he eats maybe three to four tiny pieces of flakes (I crush them so they are easier to eat) and he spends a majority of feeding time trying to ward off the tetras. All in all the food is pretty much gone in 30 seconds. His diet has not changed for the past two weeks. I have been pre-soaking my bloodworms since I realized they were causing him to bloat. He doesn't seem interested in food anymore, though.

I agree with everything said above except the pH. My tank water has a natural pH of 8.2 and my bettas do well. That being said, Indian Almond leaves and alder cones are still beneficial for the tank, and they'll also lower pH though I don't think that is the main issue.

Most fish will adapt to ph slightly out of their "range", I've never seen a problem with bettas being kept in a ph of 8. That being said since you have neons and silvertip tetras, like others have stated, I would add some indian almond leaves since the neons and bettas will appreciate it, its really beneficial and heals fin rot really well.

He's beautiful! I hope he feels better soon. I can't add anything to what others have said, other than to check and double check for anything that may have changed. It sounds like he may not have been eating enough, though he doesn't look particularly thin. Is he "panting" when he lies on the ground? If so maybe he inhaled some kind of particle or toxin. I just had that happen to my betta. I would say just keep doing your regular water changes, keep the water extra clean, you could add some Indian almond leaves to help with astringency and heal the fins and/or gills if something's going on with them.