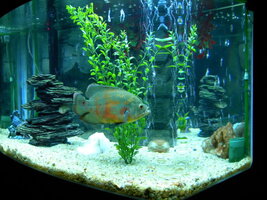 Member
welcome to fishlore!!!! Ive kept silvers with oscars and they did fine...but my oscars grew up with them....so not sure how an adult would do with them .....as far as your danios, they would have to be pretty large for him to not see them as food......hes fabulous looking!!!!

Member
That was a great vid! Your tank looks great and your Oscar looks so happy!

I agree with Shawnie about the growing up together. A group of 3 Silver Dollars would work as they grow to 6" but it could be ify. Giant Danios I would so no on too since they have a long narrow body and only grow to about 4", could be easy to eat for the Oscar later. I suggest in 2-3 Pictus Cats for the bottom. They are active and fun to watch. Drop sinking pellots in after lights out.

He's a gorgeous oscar! I'm really not good with oscar tank mates (I'm still learning myself), but it looks like Shawnie and Alyeskagirl have you covered!

Member
I've kept them together with no issues at all.

Member
Thanks guys. It's a tough call. I'd hate to go through the whole quarantine procedure just for my Oscar to start wailing on them. This happened to a Blue Acara when my Oscar was about 4". He had to go back to the store.

Trout_Mask_Replica said:
Thanks guys. It's a tough call. I'd hate to go through the whole quarantine procedure just for my Oscar to start wailing on them. This happened to a Blue Acara when my Oscar was about 4". He had to go back to the store.
Click to expand...

Is this the same oscar? If so, you may want to re-consider silver dollars. Blue acaras are a little tougher than silver dollars, but not by much. How big was your BA?

You may just have a very aggressive oscar.

Member
The Blue Acara was about the same size. I probably should have tried a smaller one. Then the Oscar wouldn't have perceived him as a threat/competitor.

He lived in relative peace with a school of Tiger Barbs. They were eaten over a period of months, but not bullied. Maybe he's just an opportunist, not aggressive.

Her: "Let's add some Angelfish!"
Me: "That's not a great idea."
Her: "How about Discus?"
Me: "Definitely not."
Her: "What about a puffer?"
Me: "Keep trying."
Her: "Another Oscar?"
Me: "If it's two males we'll have World War 3."
Her: "More Tiger Barbs?"
Me: "Does the Oscar look like he feels guilty?"
And so on until we get to the old faithful SD, which I have reservations about.

If you do decide to get the silver dollars, you may want a backup plan in case things don't work out.