Hello! I have 14 fish in my 38 gallon tank, and 5 of them are tiger barbs. Yesterday night I noticed that I only saw 4- upon later inspection, I found one hiding behind the heater and today hiding behind the filter. The separated tiger barb is the smallest and I think he's being bullied. He is noticeably paler than all his fish counterparts, and he looks shaky and very stressed out. He is the only unhealthy looking fish in my tank. Is there any way to help him? I'm trying to put the bully in an isolate tank and reintroduce it to the tank later, but a. I can't tell which one is the alpha because they all look the same, and b. when it was the lone tiger barb in the tank I tried catching it for an hour straight and it's just way too fast. Please send help. Happy Easter to the ones who celebrate!!!

Hey, tiffanyfish! Happy Easter to you as well.

As I said in a separate thread today, removing the offender will just open up the harassment spot to someone else. I would add more tiger barbs, as a group of five is way too small to make sure aggression is properly spread out. The more barbs there are, the less chance there is of one particular fish being picked on constantly.

Unless he has some severely torn fins or some sort of lesion from the bullying, I'd just leave the weakling be. Make sure your water is clean (0 ammonia, 0 nitrites, <40 nitrates.)

Do your fish have lots of places to hide? Can you post a picture of your tank?

Hello Dovah! I don't really like tiger barbs to be honest because they are the only aggressive fish among my overall peaceful fish tank, but I will add more if it means everyone is less stressed out and better off My readings from the API test kit I did yesterday indicate 0 ammonia, 0 nitrites, and 10-20 nitrates (I really can't tell the difference between the 2 indicator colors. They both look exactly the same to me) so I know that my water is not the problem. I'll attach a picture of my tank and a picture of the bullied fish. My tank is relatively new, only running for 2 months because my last tank broke. Because of the major size upgrade we did, we are still working on the decorations. I am investing in some plants and a really big decoration instead of the 4 little ones we have. Thanks a bunch Dovah! Hopefully these pictures help. 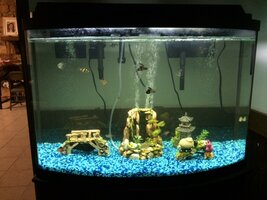 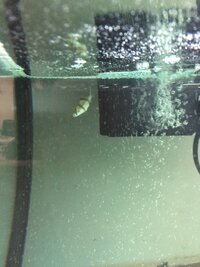 Thanks so much for the detailed response and pictures!

It looks like your bullied fish is just really stressed and trying to steer clear of the fracas.

If you don't like tiger barbs you certainly don't have to keep them! Rehoming is definitely an option and I'd hate for you to keep fish that you don't like. They really are like living, breathing and swimming weed whackers in most situations. Adding more if you don't like them is probably not the best option. I suggest trying to catch them BEFORE you add more decorations - you already know how hard they are to catch!

More decorations/breaks in line of sight will certainly help any future fishy aggression but as you said you are working on that.

What other fish do you have in there? There are plenty of other shoaling species you could use to replace your tiger barbs that should be perfectly fine in a community setting.

It's not that I dislike tiger barbs as a whole, just ONE of the group that I have (the mean alpha). All the other tiger barbs get along. Possibly this is the perfect time to mention this- this is the second occasion this has happened! The same alpha bullied one of its counterparts and it took shelter to exactly the same places the current one is. That fish eventually died. I wish I could tell which one the alpha is, so I could give him to someone else!

In my tank, which is 38 gallons, I currently have 5 tiger barbs, 4 black skirt tetras, 3 red phantom tetras, 2 black spot barbs, and 1 common pleco. How many more tiger barbs do you recommend that I add? As I said earlier, thank you so much!! Your responses have been extremely helpful Much love!!!

As mentioned above, if you get rid of the alpha someone else will just take his spot. If you don't want to rehome them I would increase their numbers to at least ten and monitor the situation.

Your common pleco will get way too big for your tank size. They need something like 150 gallons minimum. My suggestion is to rehome him and grab something like a clown, bristlenose or rubbernose pleco. Also, most plecos need soft driftwood like the Malaysian variety to aid in digestion and they will eventually die without it. They also need supplemental foods like algae tabs, fresh veggies (zucchini, cucumber, etc.) and even stuff like shrimp pellets, as they cannot survive solely on the algae in your aquarium (which looks pretty spotless to me!)

You've got a lot of shoaling fish and I'd suggest keeping the shoaling species to two in your tank. The black spot barbs get to six inches and are too big for your tank as well and should be rehomed anyways.

All shoaling fish should be in a group of six minimum, I like to recommend ten. Larger numbers may not particularly lessen aggression, but the aggression will be more spread out so that one fish isn't likely to get the brunt of things. They will feel more comfortable in larger numbers as well since that is how they live naturally.

If I were you I'd rehome the tiger barbs and the black spot barbs and up each species of tetra to ten individuals. You'd then have room for a centerpiece fish or two like a dwarf gourami and a Bolivian ram.

I have actually have someone who waiting on my common pleco which is good! And yes, I feed him an algae wafer everyday and veggies occasionally. I'm actually sad to see him go, as he has been with me for a while now. I had him before I even got the current tank. He's a real survivor.

I'm going to bring your advice up to my father and try to rehome the barbs! I quite like the tetras I have since they all seem to get along with one another. Also, the dwarf gourami looks really cool. I'm going to look into that + all the advice you gave to me! Thank you so much Dovah!!! I hope you had a wonderful Easter

I just checked the tank today and the bullied fish has turned back to normal??? It's colorful again and swimming just fine. I have no idea what happened (perhaps it's an Easter miracle!), but I will still look into rehoming all my barbs and pleco if it means a better life for all of my fish arky Big thanks!!

That's awesome for the fishy.

Spoke too soon. He got bullied back to the corner again :'( The joy was short lived.

Aw, I figured as much but at least he got a short respite. Have you called around to your local fish stores to see if they'll take your little buzzsaws and pleco?

I'm calling tomorrow! Unfortunately my list only has 4 local fish stores on it, because most people go to corporate stores like Petco or Petsmart

I hear ya, I'm close to a rather busy college town and still only have two stores dedicated to fish. Good luck with your calls, I'm sure someone will take them.

Hey Dovah- how well versed are you in tiger barb disease?! The bullied one has a single red eye and I'm kind of freaking out. I don't know what's happening but I hope he isn't sick.

Not very versed. I'd suspect a wound more than disease, though his immune system could be suppressed right now due to the bullying.

Can you get a picture?

i'm not sure how well you can see it on camera, but it's red around the eye instead of the black ring normal tiger barbs have. and it's only one eye too, which is odd.

I'd be willing to bet someone got him in the eye. That or he slammed into something while swimming away from someone.

Thank you! Well, I tested my water again today and everything is still perfect. I saw him floating upside down momentarily and swimming sideways. I don't think he'll make it through the night. Thankfully, I might have found somebody to take the rest of the tiger barbs off my hands. I just feel so bad for the little guy.

What are your parameters?

He didn't make it through the night And my parameters are still 0 ammonia, 0 nitrite, 10 nitrates. My dad disliked the idea of rehoming the tiger barbs so much that he decided to buy 5 more. Now I have 9 tiger barbs who all like picking on one of my red serpae tetras. I am in the process of rehoming my 2 black spot filament barbs and my plecostomus. I added a lot more decorations. I am so sad.

Aw, it can definitely be frustrating when someone else has the final say in something like this. Sorry about your fishy.

Ryan has some excellent threads on starting a saltwater aquarium:
Part 1
Part 2
Part 3