I've had my 260 litre tank for nearly 3 and a half years and have recently had issues with buildup of hairy brown algae. 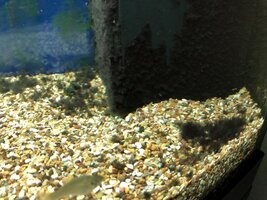 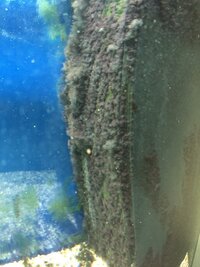 I got the most of it out yesterday, but this is what's left.

I used to have larger fish in the tank, silver sharks and other similar species, and never had this problem (just normal green algae on the glass). A few months ago I added another internal filter to increase filtration capacity (is now 16 litres of filtration capacity), and repurposed the tank to put my Mollies in.

I have the lights on most of the day, which obviously contributes to plant growth, but I've had the lights on for the same amount of time for 3 years and haven't had this kind of buildup. I feed them Tetra Prima flakes, all of which is gone within 2-3 minutes, so I don't think it's overfeeding.

Are there any initial suggestions to deal with this?
leftswerve
Member
Nitrate build up. Have you tested the level lately?
mattrogowski
Member
I just tested with an API test kit and it's around 40ppm (although is hard to tell the 40 and 80ppm colours apart on the colour chart), but it's the same bright red it always has been.
SeanyBaggs123
Member
Any other changes to the tank?

Resembles Blackbeard Algae to me...
mattrogowski
Member
Ah, yes that looks exactly like what it is.

Nothing I can think of - the amount of lighting hasn't changed since December 2015 when I first got the tank, I clean the substrate like I always did, had been doing water changes, and added the additional internal filter - the only thing I could think was different food as different fish to what I had to start with, but like I say, they eat it all within minutes and there's never any left. I moved some ornaments from another tank I have, but that tank didn't have the issue.
mattrogowski
Member
I've read that Seachem Flourish Excel should help get rid of it?
SeanyBaggs123
Member

mattrogowski said:
Ah, yes that looks exactly like what it is.

Nothing I can think of - the amount of lighting hasn't changed since December 2015 when I first got the tank, I clean the substrate like I always did, had been doing water changes, and added the additional internal filter - the only thing I could think was different food as different fish to what I had to start with, but like I say, they eat it all within minutes and there's never any left. I moved some ornaments from another tank I have, but that tank didn't have the issue.
Click to expand...

Interesting. From what I've read BBA has to be transferred to your tank (it isn't created by excess light or nutrients). No new plants, new fish, decor from a tank at the pet store, something you ordered online, a new snail? etc....

You can try that. I used Ramshorn Snails (they ate it). You can also kill it with hydrogen peroxide, but I wouldn't recommend that method for you since it is growing on your filter and could crash your cycle.

Edit: if the excel is working the BBA will turn Red (it will be obvious).
leftswerve
Member
Hey op , hows it going?
mattrogowski
Member
I've been using the Excel Flourish for a week and so far there's no noticeable difference, but I read a few reviews saying it took a little while to work so I'll keep dosing every day.

In regards to changes to the tank, I was thinking more recent changes, however looking back at photos, I think it could go back 6+ months.

I have 3 tanks; the currently affected one that I've had for over 3 years (tank A), another 260L (tank B) and a 200L (tank C), both of which I've had for just over a year. Originally I had larger fish in tank A, put some tetras and barbs in tank B, and had mollies in tank C. Tank B has a large piece of mangrove root in it (which has been in there since I got the tank).

Some time mid last year I had some algae growth in tank A which turned red, but it seemed to clear and I didn't think much of it after it went, but the plastic plants I had in there seemed to be going a bit dark on the edge, which could have been the very start of BBA growth.

In around November I moved my fish around between the tanks (A -> B, B -> C, C -> A). Some ornaments and decor moved around too. At the time I did this, neither tank A or C had any BBA that I could see, however I've found a photo of tank B from October with the mangrove root covered in BBA too (just not as obvious). So either tank B was the first tank to have it, or I transferred it from tank A with some decor several months before that. I then moved some decor from tank B to to A and C.

In December I moved a piece of wood into tank A, which has BBA on it in the photo I found of it, though whether it had it when I moved it or it had started to grow by the time I took the photo, I'm not sure. By January the BBA growth was starting to be visible on the substrate and on the filters. Since then, there's been the gradual growth of BBA.

So, it could well be a change made to the tank when everything was moved about, I just discounted it as it was 6 months ago. Either tank B was the original source, or A was and I transferred it to B and back to A.

In terms of what actually introduced it originally though... I mean, back last year I hadn't added anything at all to tank A for months, so if that was the original source I genuinely have no clue. When I set tank B up, I stocked it with fish over a few weeks over a year ago and then didn't get any more, and the only other decor I put in came from other tanks I had. The mangrove root had been hanging up in a shop for who knows how long, and was so dry it took weeks to even sink, so I wouldn't have thought it came in from that.

My plan is to dose tank A until it fixes it (if it does), then do tank B, and chalk it up to experience and make sure to keep a better eye out for it in future.
leftswerve
Member
Cool, good luck, I (hardhead) still think it is excess nitrate buildup and when you moved stuff it around, it just fluffed and re started the decay process for any detritus laying around.
BUT, you follow the plan you feel works best for you.
Share:
Facebook Twitter Reddit Pinterest WhatsApp Email Link

Contemplating Canister Filter, Best To Get?