Breeding occured in community tank- how can I raise fry?

Super excited because I witnessed 2 of my honey grahams mating, and now the male is on the bubble nest! I'd love to raise as many as possible, but I'm not sure how I should go about that.

This is the tank, 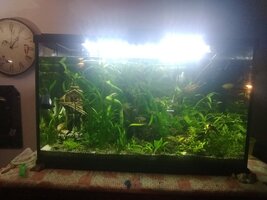 At the top left in the first photo is the bubble nest, seen up closer here, 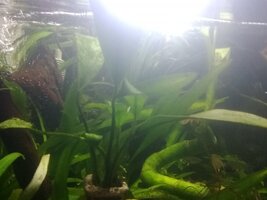 (Just imagine that bright white light is the nest lol)

Should I move the eggs? Move the fry? Leave it be? The male is actively guarding the nest, and as the largest inhabitant of the tank, he doesn't have anyone pushing the boundaries. But, as you can see, it's not exactly the most secluded spot, and I don't have any true ground cover plants to provide hiding spaces.

My other concern, is that I usually turn a powerhead/wavemaker pointed at the surface (seen on the top right in first photo) on at night to provide better aeration... Not sure if it's necessary, but since my tank is pretty stocked, I don't want to risk being underaerated. This would probably destroy the bubble nest. With two filters and an airpump, will it be okay without it if I do leave them be?

I have a 5 gallon being used as a hospital tank for my male Molly, which he's due to come out of tonight or tomorrow. It's had super fungus plus in it, which I understand can be used with eggs anyways, so would I be able to move the eggs into there once he's out? Its a critter keeper, so tall not long unfortunately. I could reappropriate a bubbler into a sponge filter for it (currently using HOB)

Hi Fae,
I have not had any fry from my honey gourami.
Most likely you want to try and raise the fry, but realistically do you have the time ? Do you have the another tank for after the 5 gallon to grow them out in ? Do you have the energy for multiple water changes each week? Can you sell them if you did raise them what would you do with the offspring?

Can you feed them 4 times per day and remove the uneaten food and poop.
I am not trying to put you off but as a retired person with the time to play around with a few attempts with other species. I realise it’s a long road . When you are a few weeks in and you want to go away for a few days you can’t.
I believe it’s at least two months work to get fry to a stage you can take a couple of days off?

Having said that I see an established tank with a good amount of cover and most likely natural Infusorea swimming in the plant material. You could just let nature do it’s thing? Say you lost 90% but still got a handful of juveniles that would be a good outcome? In that case very little has to be done.

I used to have sparkling gourami that spawned regularly in my tank. I tried to raise up the fry in a 5g, but I didn't have any success. However, what I found was that some of the fry in the community tank would make it to adulthood when I provided cover in the tank. I had a large clump of pearlweed floating along with a lot of duckweed and floating plants so the young fry could hide. I also fed loads of live food to the tank (microworms, grindal worms etc). The tank always looked messy (carefully currated aquascape and raising fry don't mix) but I did manage to grow my group of sparklers.

Thank you both for the perspectives and advice. Perhaps I'll try to make my community tank more survivable for them. I have some java moss I could move from my Betta tank, would you recommend that? I have tons of duckweed as well outside in a crayfish tank, I could move some inside but run the risk of introducing something cause it's a natural tank (like a tiny local pond)

Would you recommend forgoing the extra aeration/water flow for now then?

And should I avoid gravel vaccing for a while so I don't accidentally suck any up? Where do the fry generally hang out? Since getting shrimp and my plants settling in, I find there's very little detritus I actually suck up anyway, not sure where it goes lol

That is a good idea ,let nature help with as little interference from us as possible.
Yes to java moss . Even buying a handful more to have a big volume in the community tank . Throwing moss over a cork gives a floating ball of protection. I would recommend frog bit over duckweed any day. Unless you already have duckweed in the community tank I would keep it out. Any floating plants will work for the fry . In fact a floating mass of plastic drinking straws, plastic plants, plastic takeaway containers all over protection. Live plants also offer live food in the form of small bugs ( Infusorea) that are so small we can’t see them ( easily).

Extra aeration is not compatible with a bubble nest.
Perhaps a small air stone in the far corner with minimum air will help you relax?

As you have duckweed in your life already you know what to expect. If you don’t mind having it in the community tank forever adding a few leaves carefully collected will be fine. However you are hoping to have fry and need a lot of hideouts very soon.
You must log in or register to reply here.
Share:
Facebook Twitter Reddit Pinterest WhatsApp Email Link
Top Bottom