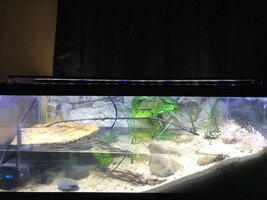 I have a spare 40B, 2 55G's and 1 75 one of which I want to make something brackish with animals such as a violet dragon goby and a few sailfin mollies.

I have a 125G I may want to convert to brackish conditions for 1-2 scats, archers and/or a small stingray.

I will keep this updated as changes are made to my current brackish tanks, and when I build future ones.
Rojer Ramjet
Neat! What's your SG on the top?

I've kept brackish for years; down to only 1 right now (125) for my archers; I do mine planted for the low SG and I acclimate macroalgae for my high SG. Or I did in the past; mine is planted currently. Anacharis, wisteria, ferns. I'm running 1.002.
Gamer
1.002 here

I was considering planted for that tank with java fern, (trying) banana plant, and anacharis but now I'm decided for an artificial environment instead. Not as neat, but the puffer more than makes up for the lack of awesomeness in the scape!!! This guy is a trip and a half, I love it.
AWheeler
Your going to maybe want the 125 for the violet goby if it gets as big as they can get honestly
Gamer
Dually noted Apierce TY

Yeah I thought maybe start one in a 40, 55 or 75 though? I seen they get enormous I seen on youtube 2 feet!!!!!!!
AWheeler
It will depend on how big it is when you get it honestly. I started mine out in a 55 gal with cichlids (don't do that, this was a surprise fish my husband got me lol) I took him out of that and put him in a 20 gal tank for a few reasons (he needed to heal and he needed to eat) They are nearly blind and they are a little skiddish as well. After he grew a few inches I put him in a 60 gal tank on his own for awhile and slowly started making it brackish, then I added a few mollies (had to acclimate them to the brackish water as well). By the time he died he was about 13 inches and weighed close to 2lbs.
Gamer
He must have been a beautiful guy though, no? I am considering keeping one with 2 knight gobies only, adding mollies at some point if desire.

So I am on the hunt for my mudskippers. If anyone here knows the best place to buy or someone here who sells them, please please get me in contact with.

I'd like to make a correction, I don't believe that F8P's needs full marine ever, I confused with the GSP for a second there. brainfart.
Rojer Ramjet

Your going to maybe want the 125 for the violet goby if it gets as big as they can get honestly
Click to expand...

I've had them before, fully grown; you really don't want one - they just screw up the water and substrate with their constant digging and sifting - mine was about 22" long when he became BBQ.
Rojer Ramjet

So I am on the hunt for my mudskippers. If anyone here knows the best place to buy or someone here who sells them, please please get me in contact with.
Click to expand...

I've had both Indian Dwarf and Blue Spotted; you need a true riparium for them with TONS of mud; they do best with a tidal setup; changing the level of the water twice a day causes them to sleep and eat in normal cycles; if they don't have that, they just kind of wallow around.

A mudskipper aquarium stinks. Bad.
Gamer
I feel like such an idiot, but would a tidal setup be achieveable enough in a 20 long?

Equipment I need to add?

I am looking at George Farmer's mudskipper setup.

Maybe I need to invest more before I do this.

Also thoughts on mangrove trees in one?
Rojer Ramjet

I feel like such an idiot, but would a tidal setup be achieveable enough in a 20 long?

Equipment I need to add?

I am looking at George Farmer's mudskipper setup.

Maybe I need to invest more before I do this.

Also thoughts on mangrove trees in one?
Click to expand...

I did a little setup with three dwarf indian mudskippers, a couple of fiddler and red claw crabs, and mangrove in a 20 long; I drilled the aquarium (7/8ths diameter hole - fit electrical PVC fittings to make watertight) and inserted a plug; in the morning I opened the plug and drained the water into a 6 gallon bucket with a sponge filter, then put it back it at night. I've seen guys wire them up to work automatically, but I was home at the time, so I just did it.

Mangrove are hit and miss; I've had em do well in brackish, and I've had em fail. Currently mine are sitting in freshwater; they were dying in my reef sump.

Were I going to do one again, I'd go down to the beach (I live near Sacramento and I work in Monterey regularly) and scoop up a bunch of sand down by the low tide mark; maybe just a little further in - that's what I'd use for the substrate; what they're accustomed to in the wild.

They really like phytoplankton, too; I make phyto-cubes and fed them pieces. I also fed them california blackworms, mysis and Repashy reef prowler.

They're VERY resistant to ammonia and nitrites/nitrate damage - they usually live in rotting filth; I was never really consistent with their salinity - I actually took cycled seawater from my reef aquarium and mixed it with RODI to about 1.002 - .005; I changed it regularly, as all the livestock seems to benefit from varying salinity (they're intertidal animals, after all, freely moving between fresh and salt).

I also fed em' ghost shrimp, and some escaped and became prolific breeders.

How do I start a brackish tank?

Dec 21, 2021
ChrissFishes01
Setting up a 29 gallon brackish tank, and could use all the help possible