I don't know if any of you have actually seen these fish in real life, my local fisheries has salt water and tropical and there's one of these little guys on their own I think
there amazing lookin an kinda freaky...I hope you will appreciate how beautiful it is

I realise this should be in salt water topic...my mistake 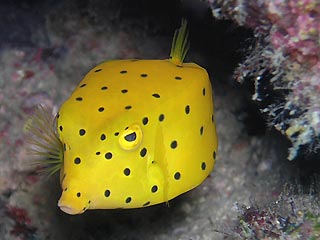 Boxlike body with bony plates, a steeply sloping forehead, a subterminal mouth, a thick caudal peduncle, and a relatively large, somewhat rounded caudal fin. The dorsal and analfins are positioned well back, just forward of the caudal peduncle. Body color of adults is a dirty yellow with a blueish hue and yellow seams between the body's bony plates. Juveniles are an attractive bright yellow with small black spots. There are eight or nine soft rays in the dorsal fin, nine soft rays in the analfin, and 10 caudal fin rays. Total length up to 11 in (28 cm).

Tropical and subtropical waters of the Indo-Pacific and southeastern Atlantic, from East Africa and the Red Sea east to the Hawaiian Islands and the Tuamotu Archipelago in Polynesia, north to the Ryukyu Islands of southern Japan, south to Australia and Lord Howe Island, and off southern Africa in the Atlantic.

Adults are solitary and territorial. Juveniles also are solitary after settlement. Secretes ostracitoxin as a defensive mechanism when attacked or disturbed.

Paired courtship just before or after sunset. Eggs and larvae are pelagic.

Not listed by the IUCN.

Collected for the aquarium trade but, due to its ability to secrete ostracitoxin, usually is a poor choice for a community aquarium.

that fish is absolutly gorgeous...I love it!!
I wish I could have it, saltwater fish I find have some much more bright colors!
but I decided to go with freshwater...less complicated and I only ahve a 10 gallon.

Their really cool. Did you know Mercedes-Benz is studying the boxfish and making a proto type car based on their findings.

Ya I watched something on that car (maybe on Daily PLanet) but ya it said that the car is really areodynamic?? that's weird but it also said that that kind of fish could swim very fast if it wanted to but I guess its to lazy... that's good for a tank. lol
Share:
Facebook Twitter Reddit Pinterest WhatsApp Email Link