2nd spawn for these parents. The female Ram laid her eggs vertically on the side of of rock this time. Wondering if these eggs will be fertilized properly?

There were a few white ones which she removed yesterday. it is day 2 now and in the last hour all the eggs were moved. Watching closely. 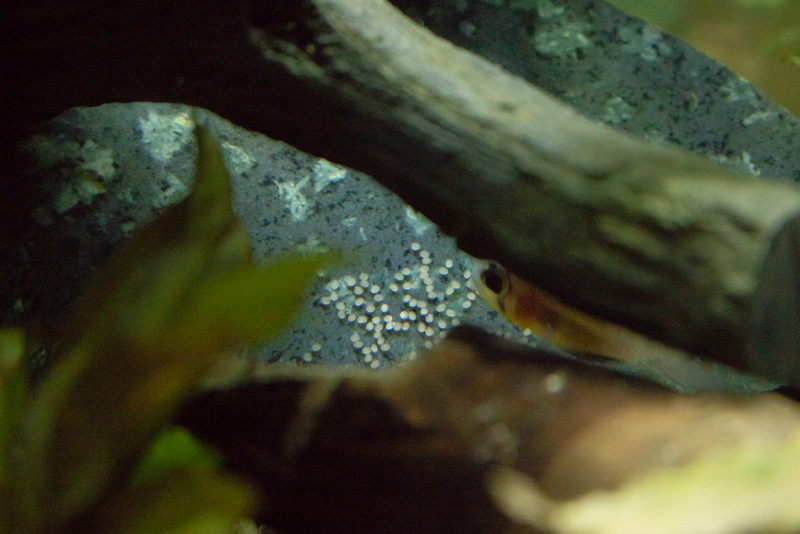 Mine have layed like this a few times. It didn't cause any problems for them at all. This is what they are best at, mine have never had a failed spawn and are constantly spawning. The eggs tend to turn white after a day or so when not fertilised.

My two pair always lay on flat tray but that is what I offer..
If those eggs are 2 days old then they look fertile IMO.

In my Ram breeding tank, I have one terra cotta plate that's flat and the other is angled (not by very much though). They bred once on the angled one but moved the wigglers to the flat one after the eggs hatched.

Mine definitely prefer laying flat too. They have many areas where they spawn, 99% of the time it's a flat surface. They have done it vertical though. As long as they're happy, I'm happy. Seems you will have wrigglers soon enough.
OP

coralbandit said:
My two pair always lay on flat tray but that is what I offer..
If those eggs are 2 days old then they look fertile IMO.
Click to expand...

coralbandit The only other fish in the tank are 5 corydoras and 5 oto's.. I removed the bloodfins... do you think there's any chance they will survive free swimming with Ma and Pa?

I am told they can be great parents .
Mine do ok if alone , not so good with other fish ..But that gets into defensive skills ?
The cories may be trouble makers ! They are happy go lucky dummies !

They may or may not last. They will have a better chance now though. Some people don't have problems with their cories and ram fry. Others find that they raid the eggs, wrigglers or swimmers very, very persistently. I remember one person saying that they would get chased away and then come right back for another go.

"Happy go lucky dummies" that fits well. That other person I mentioned called them persistent dummies with how they kept going back despite the angry parents.

Otos would be less of a problem. Most don't have problems with them. But there are people that have had them eat batches of fry.

As this is the second spawn the ram will likely eat them too. They tend to eat them the first few times. Whether these fry will do well we'll have to see. Maybe even once the parents are experienced they will manage to raise them up.

They will have the best chance on their own though. With other fish there's always more of a risk to the fry. Mine are steadily keeping theirs alive for longer and longer. Just takes them time to learn to deal with other fish
OP

coralbandit said:
I am told they can be great parents .
Mine do ok if alone , not so good with other fish ..But that gets into defensive skills ?
The cories may be trouble makers ! They are happy go lucky dummies !
Click to expand...

The parents are pecking away any stray Cory in their territory, if only they would mind their own beeswax! Do they eat their own fry out of frustration if they get too close? Following the other German Ram breeding thread.. great information there.

Feohw I was hoping that a "few" might just escape and hide in the plants but as they take a fair amount of time to grow out that's probably not very realistic on my part thinking they would be safe. I wouldn't mind a few new ones but I'm not trying to breed as I couldn't hand them over to the LFS, that's not in me!

Elkwatcher
Bolivians my favorite. Mine have laid eggs mainly on flat surfaces but also some large leaves. And have been "Great" parents. The spawns have always been fine with my Corys. When protecting my pair will actually "Ram" figures its in their name. I recall seeing them treating a "Mystery" snail like a bowling ball.
Just a little FYI, don't panic or be surprised if all of a sudden the eggs or wigglers disappear. Mine always move them 3-4 times until they are swimmers. I have since moved on to EBA breeding,
coralbandit is giving the Bolivians a go.