fishpicklepaste
From my LFS, I got two Bolivian Rams that were supposedly male and female. However, it's been about a week in their 55 gallon tank and I believe they are actually both male. Their vents point straight back and are constantly bickering with each other. I just noticed them lip-locking for a few seconds. They are both also starting to get darker scales (sometimes they change colors and become really black on the sides of their bodies).

Could I solve this by going back to the store to get 2 female Bolivian Rams so that they can both have a girlfriend? The tank has plenty of hiding spaces for them.

Thanks!!
Coptapia
If they can’t sex them what makes you think they’ll give you two females, lol?
Pictures?
BillCNC
Try this and see if it helps.

Regards
Bill
fishpicklepaste
Will these do? They are the best that I could get. 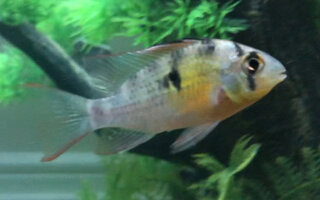 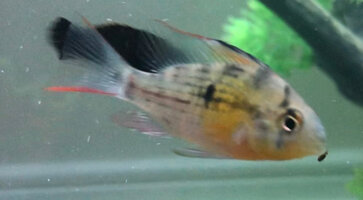 I was planning on going to a different store in my area to try to get the new Bolivian Rams. Hopefully they are able to tell at that store!
Coptapia
I’d say they’re both males.
BillCNC
Agreed, both males.

They seem young still so sexing is a little harder when small. But even at this stage, there is still one way that is reliable enough to purchase a desired pair.

The males nose is longer on Ram's with less of a sloping curve. A female's nose rounds down fairly quickly and doesn't extend out as far and is more visible with age.

Regards
Bill
fishpicklepaste
Would introducing two female Rams to the tank possibly help with calming their aggression?
BillCNC
First, try to crate visual blocks with plants, sponge filters, wood and/or pottery. Try to get them to settle down more naturally. You can also setup a little area for each one on opposite ends of the tank. Also feed from both sides of the tank so one doesn't have to cross territorial lines to survive. Once you get things settles down a little, Yes, try 2-3 females. Your success will be in the form of visual blocks and patient's. In a 55 these guy's really shouldn't be arguing much as there is plenty of room to share unless your feeding from only one area.

Think of it like a Grocery store on the edge of a gang riddled town. One gang would need to cross over into another's territory to buy good's to survive. What do you think the opposing gangster's would do?

Regards
Bill
Feohw
First of all, whether they are male or female they will fight like that. Lip-locking, chasing, fin batting etc is all normal for rams. Males can be more violent to one another but until a male and female pair they will fight at times too. Mine go dark when they fight too, they normally clear up before long.

I'd agree that that's two males. If you can find two definite females it could work, or if you can return one male and replace him with a female or two that would be fine as well. There would need to be plenty of visual blocks and separate breeding areas in the tank in case you get two breeding pairs. I'd definitely have a backup plan in case things don't work out though - some can be more aggressive than others. Personally I prefer having one pair and then a few extra females in my tank. The thing is that, even if you add two females, you aren't guaranteed to get two pairs as a result. If you do get two more females, make sure to add extra territory sites in case they don't pair - even so they aren't guaranteed to go where you intend them to.

I have four rams in a 53g, a male and three females. They have the occasional squabbles, nothing too serious. Even when they breed things don't get to bad.
jmaldo
fishpicklepaste
Unique username LOL
Your title caught my Eye, "Bolivians" one of my favorite fish so personable and such characters, I liken them to puppies.
Nice Looking juveniles. I have breed a few hundred over the last 1.5 years. I am terrible at sexing. Especially the youngsters.
Agree with:

First of all, whether they are male or female they will fight like that. Lip-locking, chasing, fin batting etc is all normal for rams. Males can be more violent to one another but until a male and female pair they will fight at times too. Mine go dark when they fight too, they normally clear up before long.
Click to expand...

Also, even after they pair they will still squabble.

I personally would give them some more time before adding anymore, but the choice is yours. Prior to adding the new ones, move some stuff around the tank, this will change up any territory claims by the originals.
Best of Luck!

Oh, by the way "Welcome" to the Forum
Minxxy
My definite male and female ram argue too... coralbandit is very knowledgeable with rams maybe he can sex them from those pics
Feohw

fishpicklepaste
Also, even after they pair they will still squabble.
Click to expand...

True. Though they are nothing like they are before they pair up. Before mine pair they lip-lock, chase, try to get away from one another and can darken in colouration etc. Afterwards mine only usually fight when the male is trying to keep the female in his selected breeding spot. That only consists of him blocking her, fin batting and guiding her towards his area, then keeping her there. Other than that, the only time he fights with his girl is when she eats one of their babies - one of my females has a habit of doing that after a couple of days.
coralbandit
I am still learning how to sex bolivian rams . I would bet against the best on German rams ..
I see two females or very immature BR. For what it is worth I got 3 BR from jmaldo to add to who I was 99.9% a pair that stayed idle for 6 months atleast ..
He sent me by guess 2 males and one female and the two I had for six months spawned now twice since adding some competition and is raising their wigglers in their own tank .
So still learning ,could be wrong but I see 2 females ? The others who voiced what they see Coptapia ,Feohw are pretty good at this game so I might listen to them on this one ...
grantm91
I have a spawning pair. 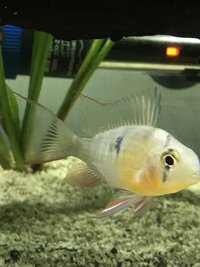 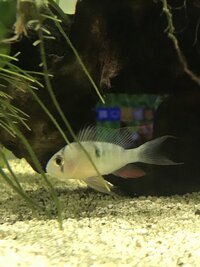 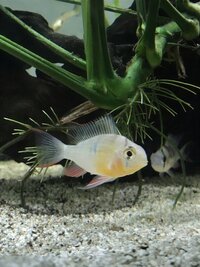 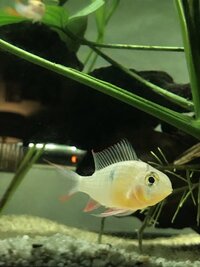 Not sure which is which. Only thing is one is rounder and one is longer, one colors up when they spawn. The rounder one is pictured twice
coralbandit
Top two are the male and last two are the female ..'
Breeding tube is the key there ..Males is small and pointy and females is larger and blunt...
Both good looking fish ..
Feohw

So still learning ,could be wrong but I see 2 females ? The others who voiced what they see Coptapia ,Feohw are pretty good at this game so I might listen to them on this one ...
Click to expand...

You never know, with bolivians we could actually end up being wrong and you right.

To me they are young males. The breeding tube of the first looks male, it would be helpful to see the seconds breeding tube as I find that the most reliable way to sex. The head structure of both looks more male to me.

Not sure which is which. Only thing is one is rounder and one is longer, one colors up when they spawn. The rounder one is pictured twice
Click to expand...

I'd say 2nd pic is male. Last two female. The female has the thicker breeding tube while the male has the smaller one. Your female is quite masculine similar to one of my three. If she hadn't spawned with my male I would have believed she was a male. Great looking rams.
mbkemp
My guess for the op is a young pair. They will fight, either way.
Coptapia
I haven’t much personal experience with Bolivians so I look at the ‘official’ differences and make a guess based on general cichlid dimorphism, which I’m more familiar with...

Breeding tube,
Female fins are rounder, less pointed,
Female analfin doesn’t pass the start of the caudal fin (it can in older females),
Females don’t get tail extensions as long (I believe not at all at a young age, I could be wrong)
Females are less colourful, and the black on the first dorsal rays is usually paler,
There’s also my gut feeling based on facial expression and body shape, based on cichlids generally.

Ironically the head shape often doesn’t help me much, as the shape of Bolivians is so variable, and a lot of them seem to be very underfed when they’re bought.
Feohw
Yeah, head shape can be a bit unreliable. Really I find most of the characteristics to be unreliable at times - mostly they tend to be fine though. So far the only way that has been consistently correct with me has been the breeding tube. I tend to go by that, or at least try to get figure out what's what by seeing which sexes characteristics are most prevalent. My female is bigger than my male, has angled fins, long tail extensions (now that my male is mature his are now longer, but hers were longer originally), darker, longer dorsal rays than my male (in fact all my females do), and she's overall just quite masculine other than the breeding tube and head shape.

Out of the four rams above, the only one I'd be less confident about would be the second of the OP's pics. If he had gotten the breeding tube in that pic I could say for sure. Otherwise I can just say that it looks male to me (though as I just said, characteristics can be unreliable in bolivians) - and he did say the breeding tube was similar to the males. So, fishpicklepaste, could you by any chance add a pic of the second rams breeding tube?