Man I’ve lost a number of fish since I started this hobby a year and a half ago but none of them have really upset me until this one.

I’m converting my tank to dirted and while it’s being setup and ensuring no ammonia I have housed all my fish in a 29 gallon complete with filter heater lights fake plants etc…but no lid and I wasn’t really worried about it since I didn’t think any fish I have were really considered “jumpers”.

I was feeding them yesterday and doing a headcount and couldn’t find my BN pleco. Sure enough he was on the floor behind the tank, looked like he’d been dead for a while.

I don’t know if it’s because I only had one of him, or if he was one of the few fish I named (Victor), or because my kids liked him, or because I felt responsible like I should have had a lid on the tank…but either way i feel bad about it. Anybody else have a BN pleco jump out of a tank? I really didn’t think they were known for doing that. I guess I should get a lid… 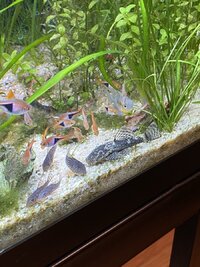 Sadly all fish have the ability to do a Houdini, especially if they are spooked by anything or feel insecure or the water is not right.

Definitely get a top on your aquarium as if it was caused by something within it, others might follow suit.

You'll never know exactly why it happens but every fish is more than capable of doing it.
Upvote 0

Never had a bn pleco do this, but i did have a small common pleco jump once. Was all dried out when i found it. Was like 15, 16 years ago.

Edit: i do pay attention when all my plecos do swim up to the top. Granted, they do like to pick algae n such off the HOB and sometimes hang out under the flow, but it really catches my attention when i see them zoom up towards the top.
Upvote 0

I had a long fin BN jump out a small gap in a lid. So yes it does happen most definitely.

A don’t wish to disagree with anyone but as a recreational fishermen I have seen many fish jump.
I like to think fish jump for joy.
Upvote 0
You must log in or register to reply here.

Anyone keep a bn pleco in an unheated tank?

How big do BN fry need to be to mix with mature BN?

Got a bn pleco

Tutorial - How To Clean A Quietflow Filter Motor