Blue Dolphin Is It Over Dosed Metronidazole

Member
I have a nicely stocked 80 gallon hap & peacock tank. It is running for over a year ago, and one of my blue dolphin was showing sign of parasite infection (white stringy poop, and not eating). I put it on a 5 gallon hospital tank, and treated with API General Cure, and gave two dozes as prescribed. Gave half packet and then another half after 48 hours. The fish did eat just one pellet after day 1, but there was small white patch near stomach. After day 3 it looked like part of flesh is missing on the stomach. I have not added any dose after that, but keep doing 30% water change every day. Now the patch is showing on other side also, if is as if something is sitting inside and eating the stomach. The picture doesn't show the depth of it, but I can see with light the cut is too deep. I wonder is it a overdose of metronidazole. Should I have given less than suggested value.

I think it all started when I bought a live blood worm, that I freezed and fed twice a week. In a span of 3 weeks, one peacock got a bloat and died. The dolphin got this disease. I suspect another peacock having sunken belly, and metro seems a better option for sunken belly, but after seeing dolphin I am not sure if I have to try it again.

Member
Metronidazole is hard to overdose, so I don't think that's the problem. Feeding bloodworms is most likely part of your problem and Metronidazole would be part of the cure. What your describing on your moorI sounds like a secondary infection. I would dose Metronidazole on your main tank, feed frozen peas or brine shrimp to both tanks. For your QT tank, I'd use salt and Furan 2 or some other med that has nitrofurazone. 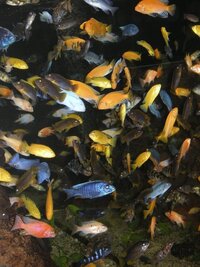 Member
Thanks. I live in India, and getting Metronidazole and other medicines are 2-3 weeks waiting. The moorI passed away before I got Furan. I got one more API General Cure, and treated the whole tank. It seems to be working, as the behavior of strawberry peacock that had sunken belly improved significantly. From hiding behind decoration, now he is at the center of the tank most of the time, eating well, and showing normal aggression to other fishes. It is almost a month, and I do not see significant change in his belly (it is still sunken). How long does it take for it to become normal.