HI all! So if you know me you likely know I have a blood parrot cichlid named captain. Captain is a amazing fish with tons of personality and he is my favorite fish (hence my name CAPTAINAquatics). He is a blood parrot cichlid that is approaching 2 years old. I am fully aware of the genetic difficulty’s these fish have due to their messed up breeding and I know it can be hard to know how long these guys will live and which ones are worse than others. I love captain but he does have some issues and one I have noticed recently is that his stomach seems to be larger than the typical BP stomach. I know that they tend to have pretty chunky bellies but he just seems like he has a larger belly than normal. He has always had this large belly (at least for several months now) so I do not belive it is a parasite otherwise I would have seen other symptoms, he eats fine and is active. I just want to know if I should expect problems down the line. I was reading today more on blood parrot genetics and noticed something I didn’t know before and that is they can have issues with their abdomen. I knew organs were and issue but one thing I read online is that “they may be fine for the first year or so, but if they have a large bloated looking stomach they may not last much more than that” and I would like to know is there is any truth to that. Captain has the typical BP deformity (deformed mouth, curved gills, slightly bent spine), however it never occurs to me his huge stomach could also be one of these issues, and a more drastic one. I do belive he may be getting picked on a bit because he is one of the smaller fish now that my Oscars are passing him in size. I don’t think the bullying is serious I’m just seeing marks here and there. Like I said still eating and active. I am not concerned about anything right now I just want to know if I should expect anything in the coming year or so and what to look out for. He is sleeping currently so I will post a photo tomorrow of him. His diet mostly consists of shrimp however he probably steals some of the catfish’s food as well. Thank you all and have a good night.

Yes I am aware the tank is overstocked. I try to do water changes as much as possible to help this and I don’t see much aggression outside normal squabbles. What is your opinion? Is it genetics, or something else. I will post a photo tomorrow.

EDIT: okay so I will post a photo at the bottom of this now, I’m just going to tag some people, sorry if you don’t know. I’m just tagging the usernames of people I can remember because maybe you guys will know someone else who may be able to help or maybe you can figure it out! I just wanted this thread to get going. 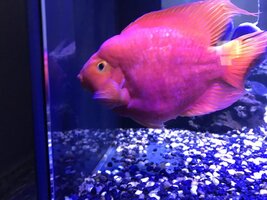 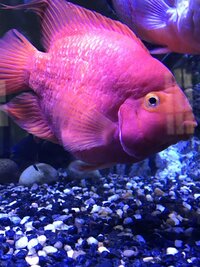 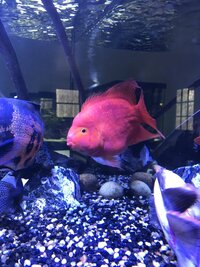 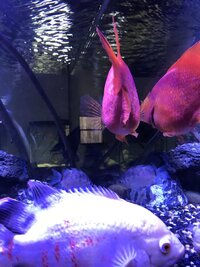 Cause for concern or normal, like I said he acts healthy.

Sep 23, 2019
Bellaona
Is there a bloating problem with my blood parrot

What Kind of Fish Do You Simply Not Understand Why People Keep?