Ssnaaiil
Member
2 of my platies became EXTREMELY bloated overnight. One was dead this morning and this one(photo below) is still alive but just floats, she moves around but just ends up floating back up.
what happened!!! 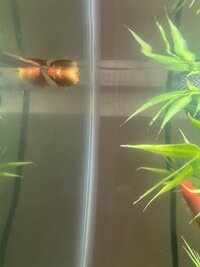 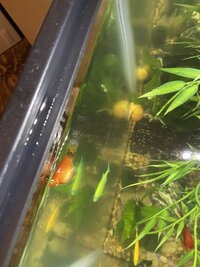 LightBrownPillow
Member
Something's gone wrong with the gas bladder, possibly an illness of some kind. Or maybe for some reason they swallowed a bunch of air, seems odd two would do that simultaneously.
lobobrandon
Member
I have to go against the previous reply and say that it is not odd that two did it simultaneously. I woke up one morning to find my guppy and platty perfect, but the guppy almost immediately after feeding started to go tail up and the platty followed suit some hours later.

It could be a disease causing this in your case due to the death, but if it is caused by a swim bladder issue due to bloating and nothing else, separate the fish to prevent others picking on it, I did that using a large plastic pot in my aquarium as I did not have a quarantine tank. I fed them both peas, the guppy recovered by the night, but the platty took 1 week to get well enough for a reintroduction. It is fine now and swimming around happily. For 6 of those 8 days it was bad it was mostly on its side or upside down. I even gave it an Epson salt bath on two occasions.

My platty was never flat on the surface, just flat on the ground or vertical head up on the surface. I must add that she did not really eat a lot of the pea paste I made. Only one of my three platties goes anywhere near pea paste when I feed the rest of my fish.