Hey y’all! I went to feed my fish tonight and noticed this strange dark black patch on the head of one of my cherry barbs. It doesn’t look particularly textured, elevated, or depressed relative to the surrounding area, and the fish seems to be behaving otherwise mostly normally - she’s maybe not shoaling with the others quite as much as usual, but is still eating and doesn’t seem distressed. Still, it’s a surprising appearance change and I wanted to make sure that I’m not missing anything obvious. One of the other barbs has been recovering from fin rot (I treated with Maracyn), and his fins are black at the edges where the rot is - he’s also got a distended belly, so I’m concerned this could be connected to whatever’s happening there.
Thanks for any advice y’all can lend! Curious about what this might be.

Maintenance
I’ve been behind on maintenance, as usual for when a change appears, but I usually change 10-15 gallons every week to two weeks. I use RO water buffered with Seachem Acid/Alk and Equilibrium. I vac the sand.

*Parameters - Very Important
The tank is cycled, and values should be 0 ammonia, 0 nitrite, 10ish nitrate (nitrate could be a bit higher). pH is around 6.8.

Illness & Symptoms
I’ve had the fish over a year. She’s been healthy that whole time, and I only just noticed this today, though it could’ve been growing before now. As I mentioned, she just has developed a stark black patch on the side of her cranium. I haven’t treated with anything, but I did do a round of Maracyn at half dose a couple weeks ago, as one of the other barbs has fin rot and a bloated stomach (see my other post). His fin rot seems to be reversing, but I am concerned they could be connected. 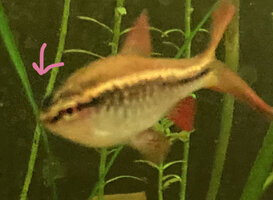 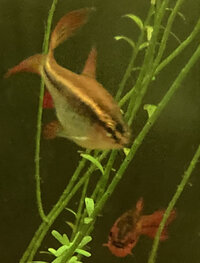 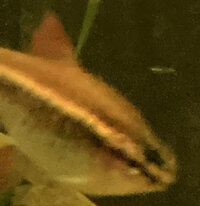 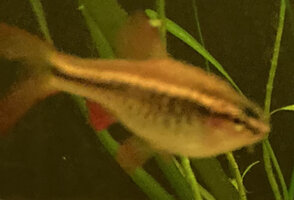 Sometimes fish can exhibit sudden black patches due to subpar water conditions. It's called Black Smudge. Once the situation is corrected the smudge usually heals.
Other possible options include simply a natural change in pigment or a small wound.
What ever the black spot turns out to be, It's probably harmless.
You must log in or register to reply here.