When I first got him in early March (I think), he was black with mostly white and translucent fins. 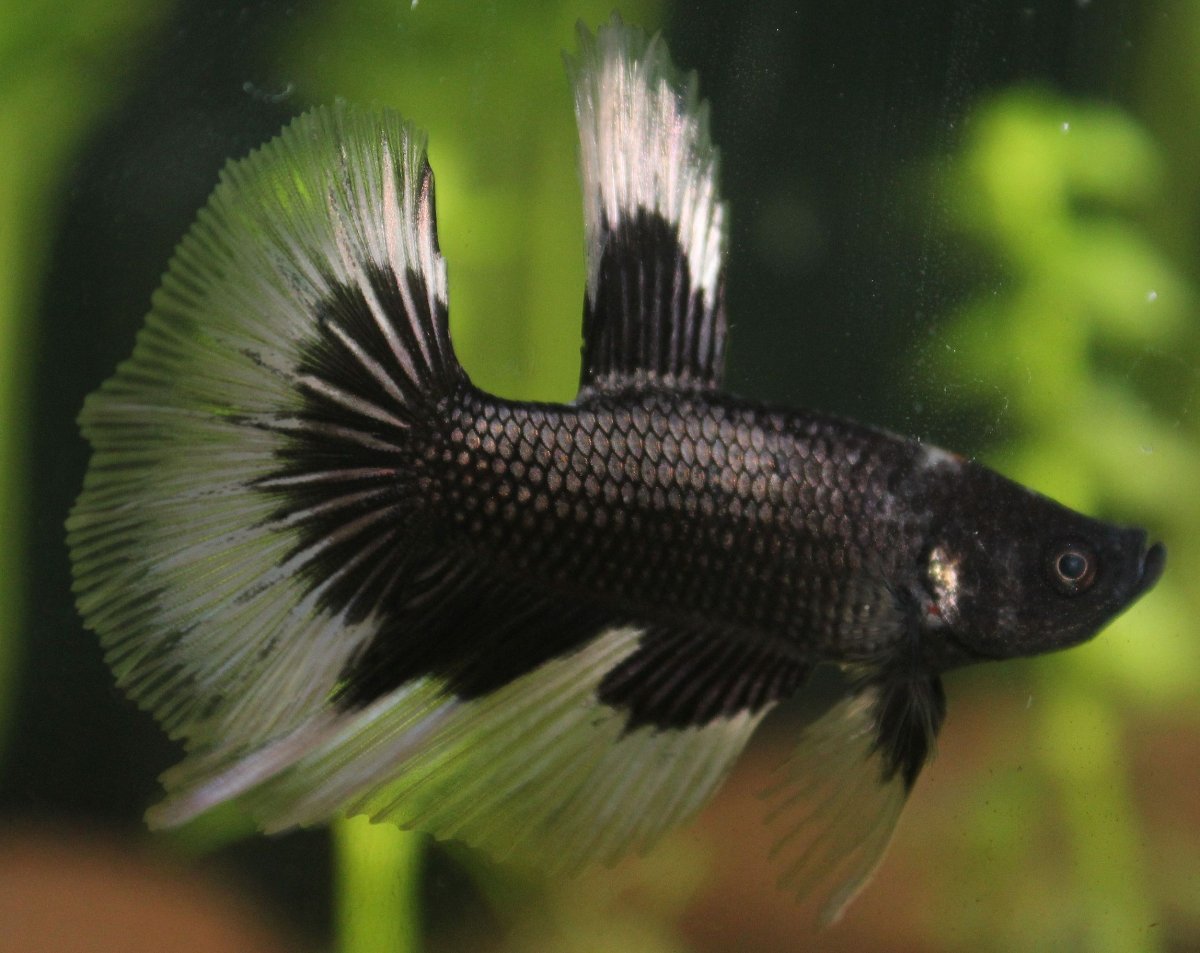 When I first got him or very soon after.
He had a gray-ish patch on his head. 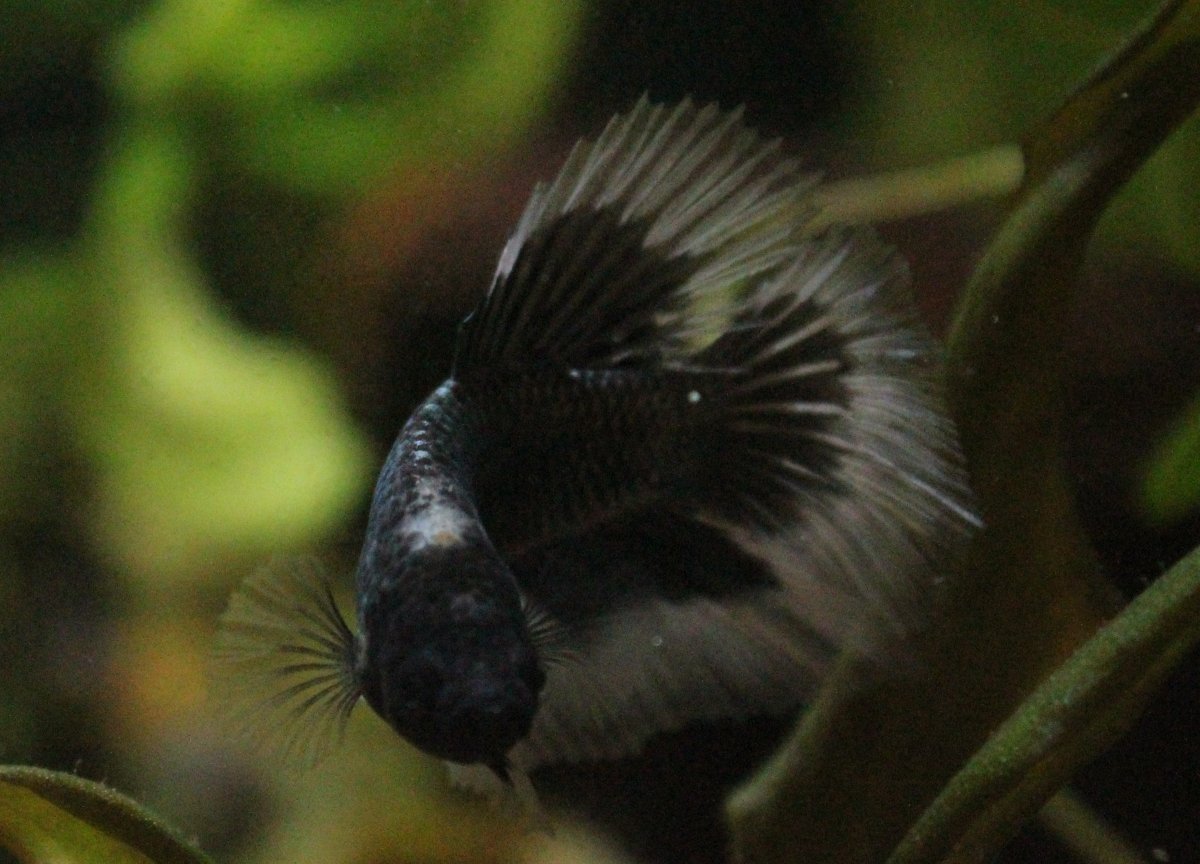 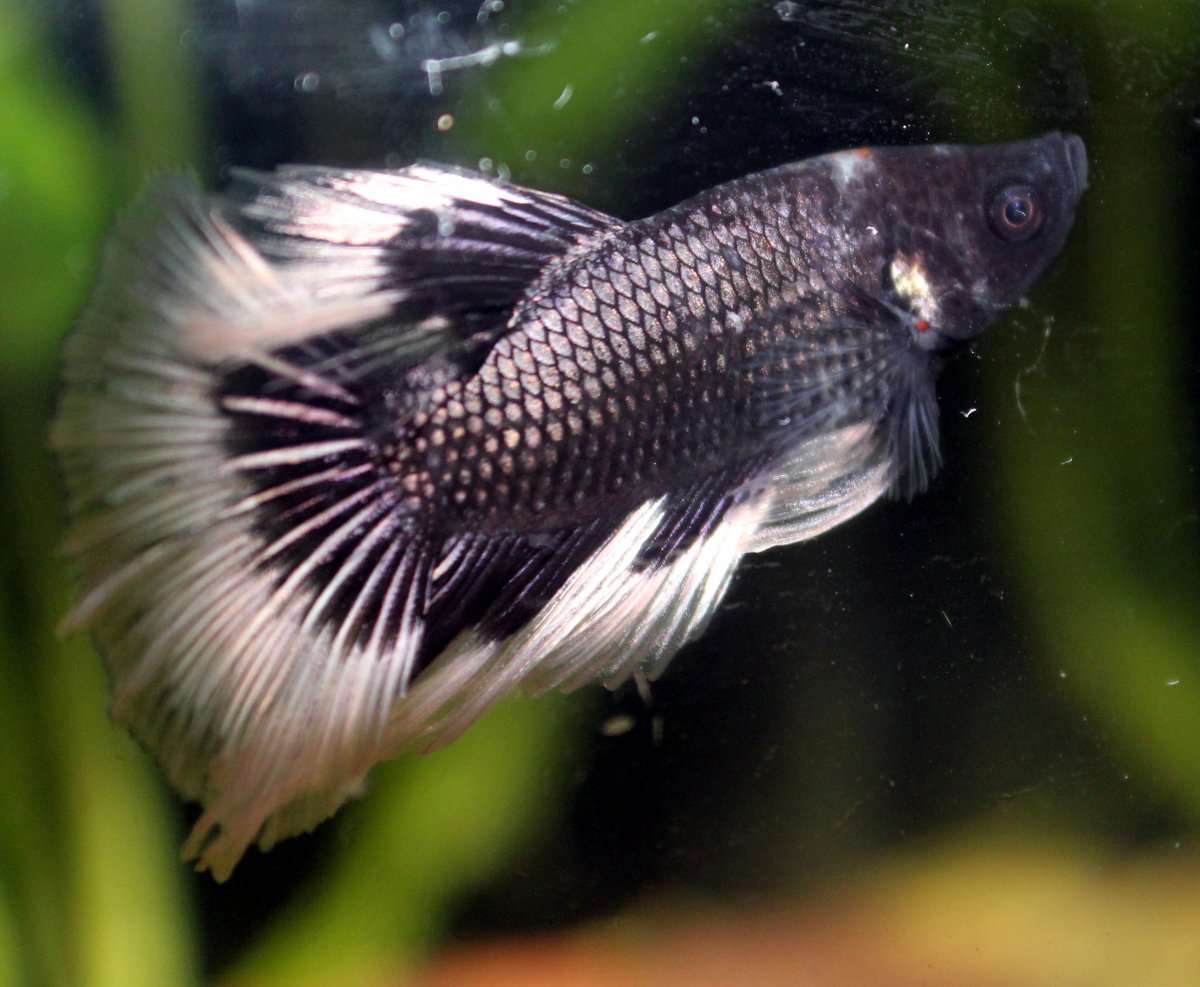 Not the greatest photo, but his tail is fanned out. 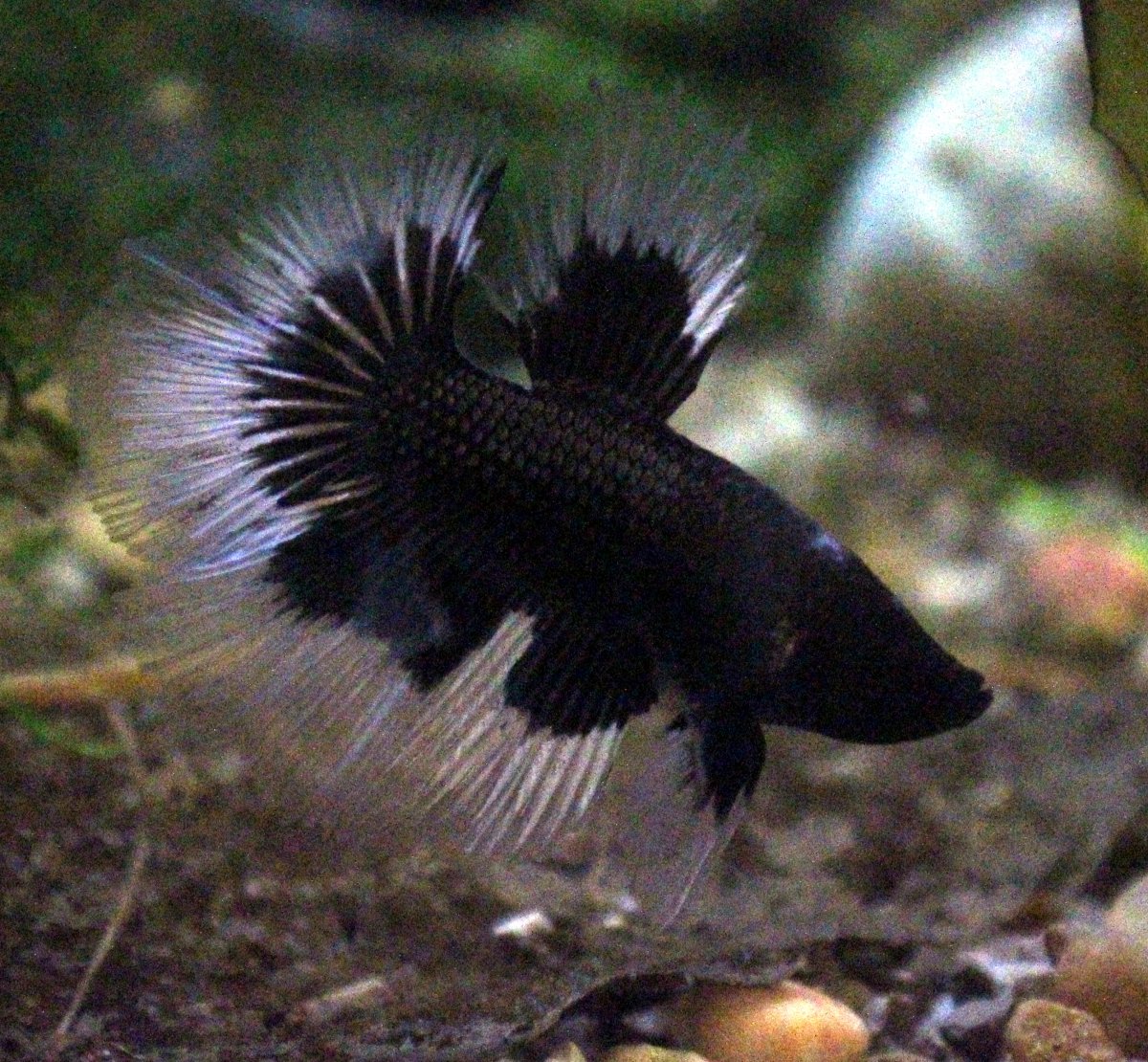 I apparently wasn't paying attention to my camera settings and the photo was pretty dark. I had...
Then a few weeks later, I was watching him and suddenly thought he looked different. I looked him over carefully and realized he had a lot less white and a lot more black on his fins! The black had been creeping over the white so subtly, and since I see him everyday, I hadn't even noticed. Over the next few weeks, he lost even more white. The gray patch on his head disappeared. He's beautiful! I liked him before, but the spots and stripes are really cool. I do sometimes miss the white patterning though... 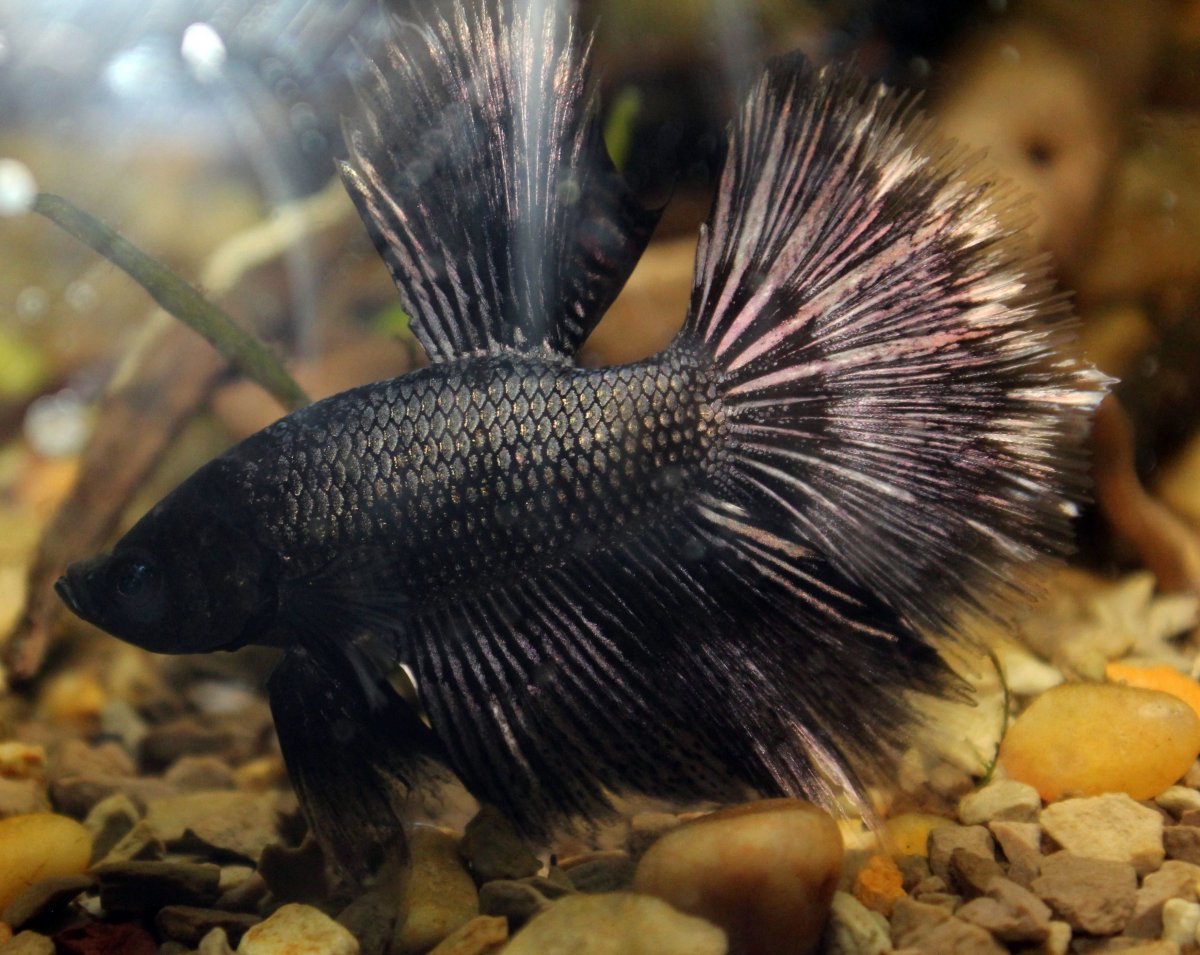 A lot more black!
You can see that it's kind of like his colors, both black and white, sort of pushed out into the previously clear and white finnage. 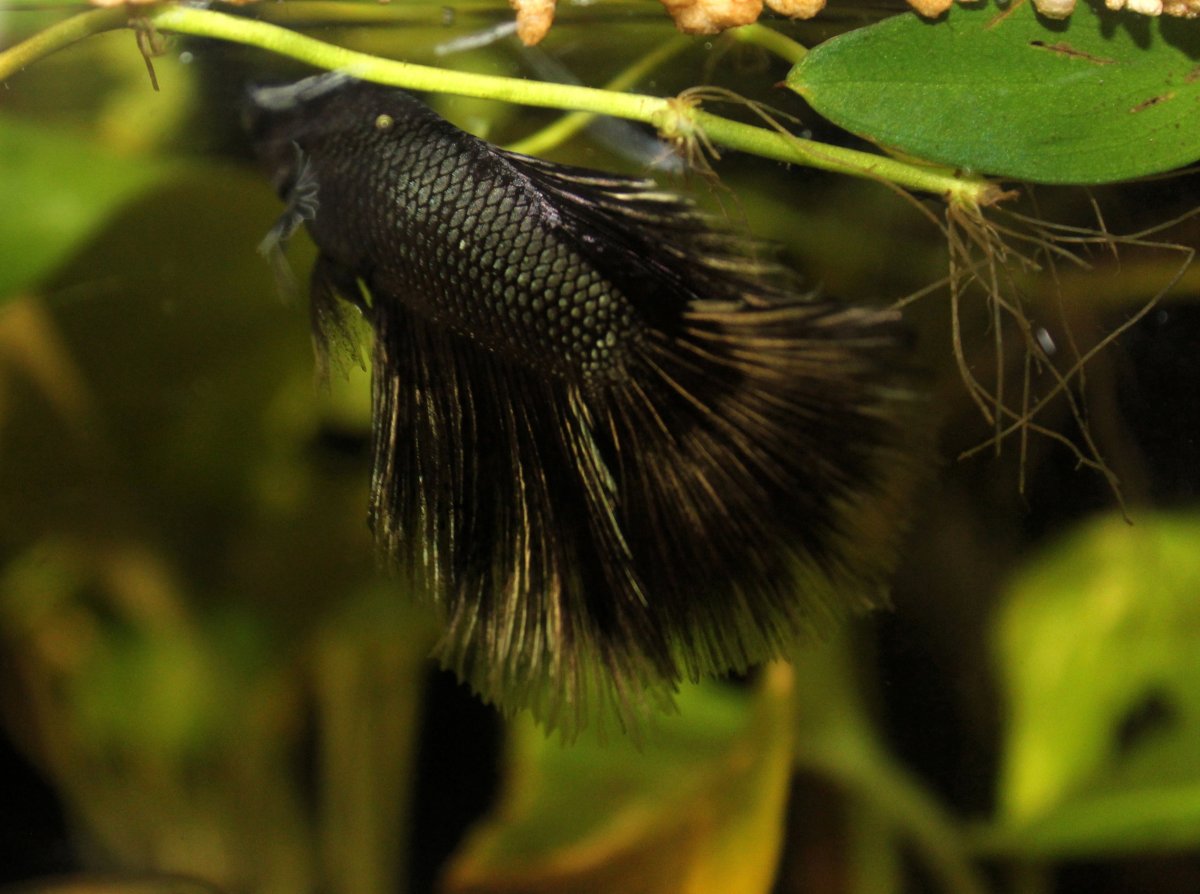 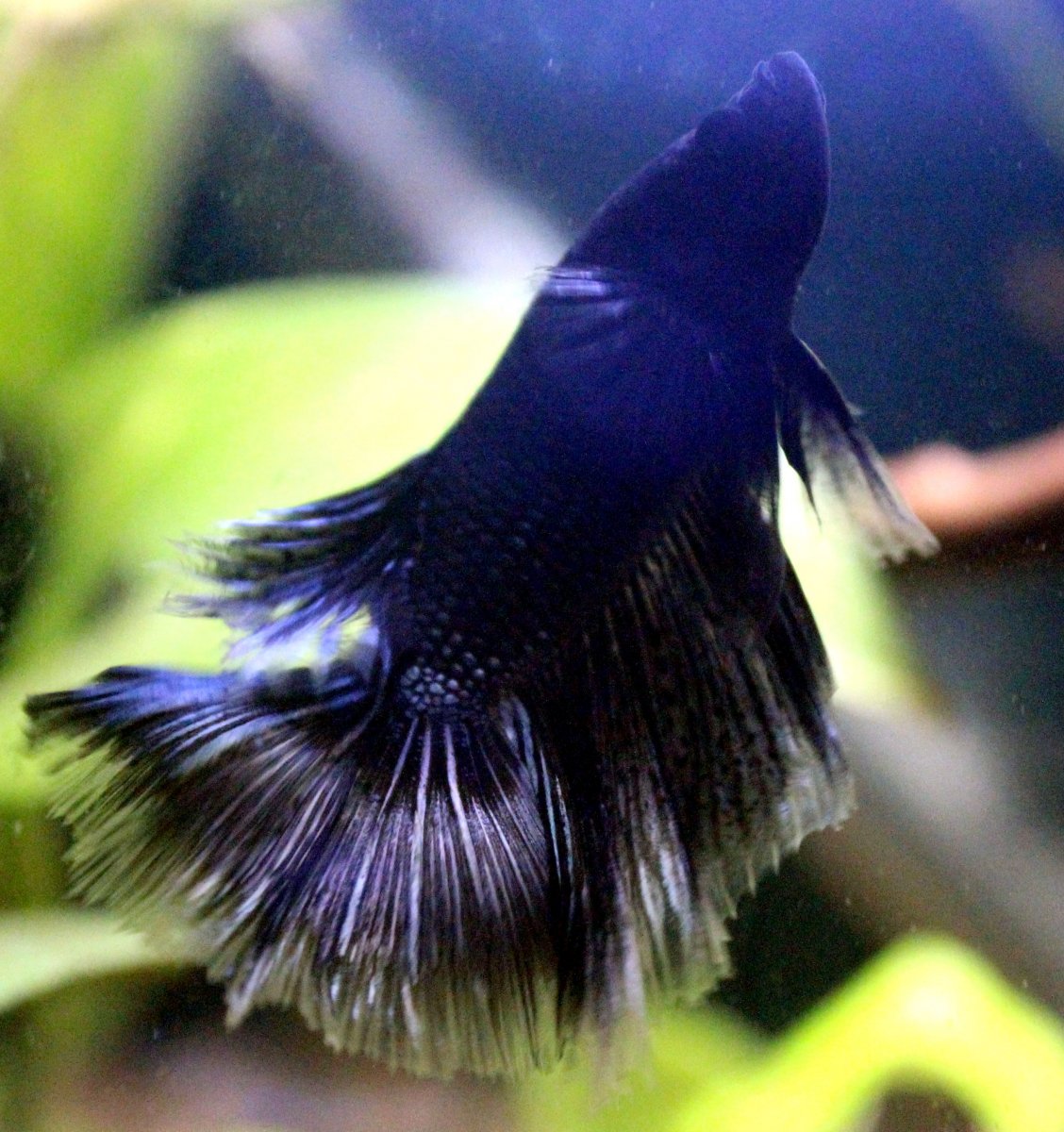 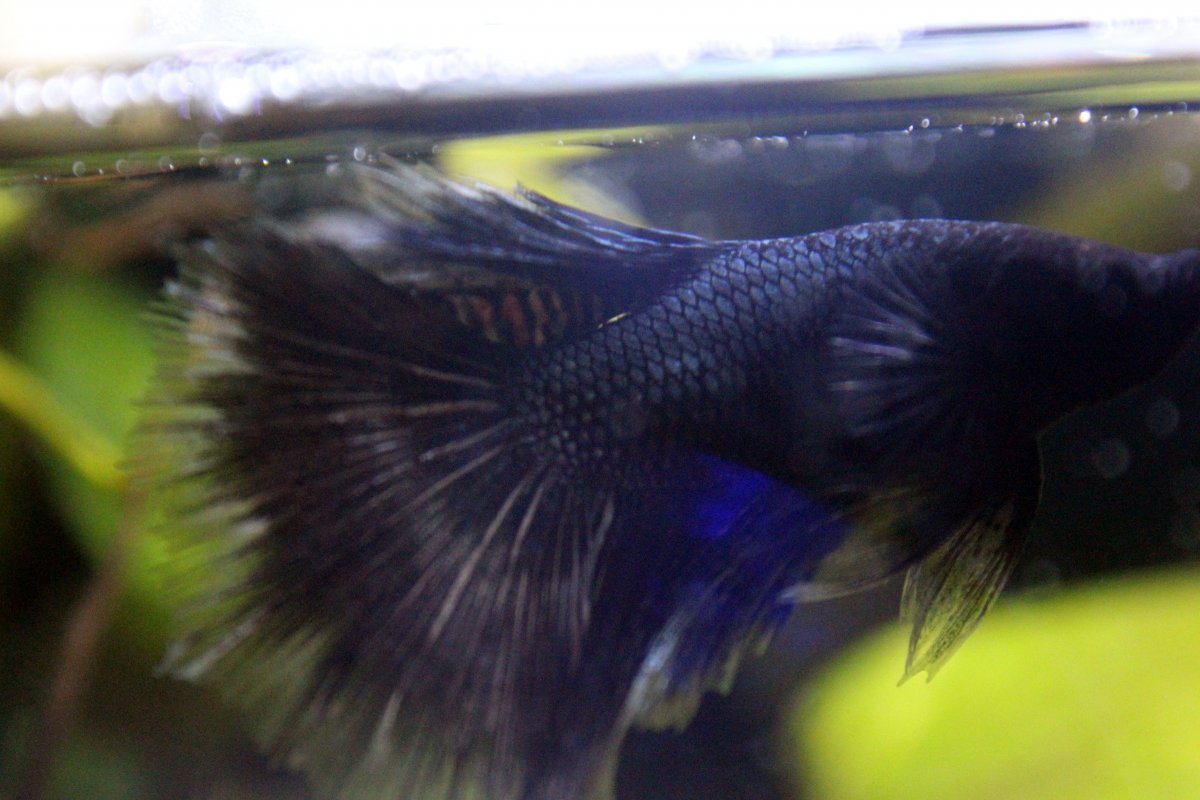 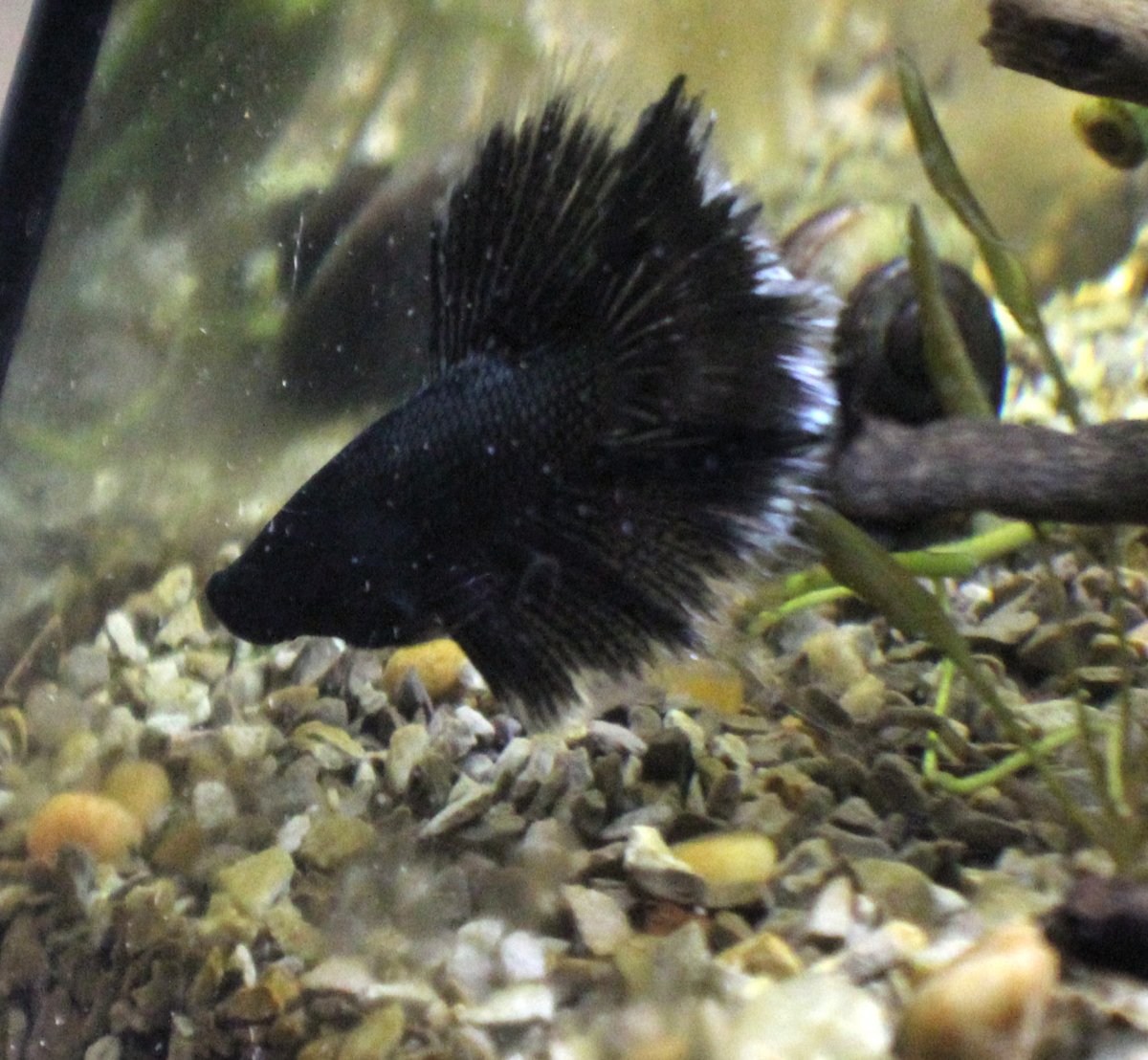 This is him now, about a month after the previous "during" photos. I'll try to get more.
I struggle to get good photos of him now because of lighting, reflections, his darkness, and his constant movement. I've yet to capture him in his full glory and don't have good photos. Out of the 361 photos I have of him, only maybe 2% are semi-decent. (Those are seed shrimp on the glass.)

This is what happened to my girlfriend's black orchid lol

MrBryan723 said:
This is what happened to my girlfriend's black orchid lol

That looks like an actual black orchid betta, at least. He's beautiful! When I bought mine, I thought, "This doesn't look like the black orchids I've seen online," but I liked him anyway. I wonder if mine will turn all black or if the white edging will remain. Only time will tell.
I kind of wonder if he's a black orchid at all. Maybe it's just my lighting, but he doesn't seem to have the blue iridescent sheen (such as the betta in your photo) that really makes a black orchid (from my research, anyway). When I kept bettas over 10 years ago all while I was growing up, there weren't all these color, pattern, and fin variations available. Just your standard royal blue crowntails and red crowntails with maybe a little variation, but nothing like what I'm seeing so freely available on the market today. It's been so hard for me to resist "collecting" them all!

Well, ours looked a lot like yours when we first got him. Assuming he was 6 months old in the pet store he is probably around 9-10 months old now.

You have a beautiful betta. Love the dark colors
OP

sunnycal said:
You have a beautiful betta. Love the dark colors
Click to expand...

Thank you. I still haven't named my bettas cuz I'm lazy, but when I talk to him, I tend to call him "sir" and "handsome." Sometimes "dude."

Do your black orchards have trouble swimming?
OP

Minxxy said:
Do your black orchards have trouble swimming?
Click to expand...

I don't have any black orchards, but I do have a black orchid betta
Nope, he has no problem swimming at all. Why?

CheshireKat said:
I don't have any black orchards, but I do have a black orchid betta
Nope, he has no problem swimming at all. Why?
Click to expand...

autocorrect
Mine folds himself in half and can't swim, ive been going back and.forth on if its finnage or genetics
I though and treated swim bladder many times