Member
I got 10 Amano shrimp about 2 months ago. They seem to do well and I've got several molts. They were pretty big sized, with the biggest being almost 1.25inches. Today i can count 7 at feeding time but the largest one , and one other smaller one have taken on an orange tint. They seem to be behaving ok. Have not found any carcasses but heavily planted tank so hard to tell.

This big one (i think) has also been an escape artist. I've had to put her back in the tank at least 3 times, but the last time was a while back and she only took on the orange tint a little while ago..
They've been eating my decomposed catappa leaf and also i drop in half a hikari algae wafer once a week or so. Temps at 26c, well established tank, ph 7. Amo 0, nitrite 0, nitrates 25-30ppm and co2 injection. I dose ferts cas04, k2s04, KH2PO4, cano3 and mgs04 and flourish micronutrient.

1. Is the tint a clear sign of impending death? Behaviour isn't that different from normal.
2. Could it be feed? They do steal a little of my bettas food, and maybe tannins from the catappa
3. Is it possibly just age?

edits: made some clarifications.

Member
They change color with food. At least mine do.

Member
Thanks. I'll stop obsessing and just monitor.
Some of this orange tint business might also be lighting + water staining from the catappa, along with eating tannins.

Member
Update: Welp, 8 days on. No issues. These guys are definitely orange tinted, but showing no difficulties and going on with their shrimpy lives as usual.

surajk said:
Update: Welp, 8 days on. No issues. These guys are definitely orange tinted, but showing no difficulties and going on with their shrimpy lives as usual.
Click to expand...

It actually sounds cool to me. When I first got my Amanos from flip aquatics they were tinted blue because of something they fed them, but it went away. Do you have any pictures?

Member
I had a similar occurence a year back. My big girl had a beautiful orange stripe along her back! Here's a pic of her 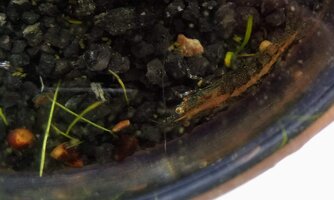 Member
Interesting creatures
The 2 on the left are the ones that didnt change colour . the single on the right is one of the orange tinted ones. Its a faint tint 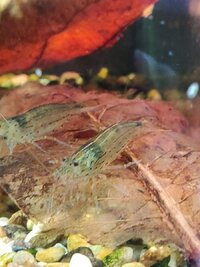 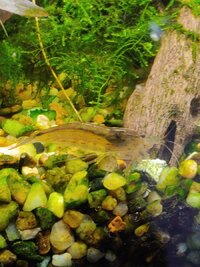