I have some very messy fish and they have been outpacing the capacity of my experimental in-tank-filteted reverse-flow undergravel filter, and my auxiliary in-tank canister filters. I do not have a good way to put a sump on this system easily in its present location.

I needed to quickly put a more effective filter into Felix's 55 gallon tank. I am changing about 20 gallons of water a day to keep him & big morton the pleco really clean.

I had a 10qt gasket-sealed Rubbermaid type container from my kitchen I have not used in 10 years. I had a used powerhead from an old tank, and the plastic skimmer I had made from a spray bottle. (That skimmer was in this tank until Felix decided to rip it loose.) 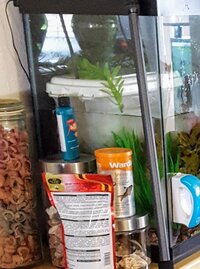 There's a skimmer with a coarse foam pre-filter outside attached through the lid to a pump inside.

Water goes thru pump, then floss, then scrubbers, to the bottom, thru the lava bed, and out 60 holes made with a soldering iron about the lower perimeter. (PU!)

I was careless when I made the slot for the power cord to come through the white lid, and if you look carefully you can see a crack in the plastic. I glued it together but it is ugly.

Total cost was absolutely zero since I had every single thing laying around .

If I had to buy the powerhead, canister, floss, pot scrubbers, and lava rock, I estimate I would spend at least $60 +tax. This holds 10 times the media of any hang on the back filter. Flow rate is about the same, depending on the power head used. Mine has about a 12mm dia intake.

To build this you need a powerhead, a small spray bottle, kitchen storage container with a good seal on the lid, some coarse sponge, some floss, some pot scrubbers, and some lava rock. I also use the rubber gasket inside the lid when I secured the spray bottle. This came from an old sprinkler but you don't need it unless you make a really sloppy hole.

I also used an electric soldering iron and an electric drill motor, 7/8" spade bit, 1/4" twist drill, a ticket punch and a razor knife. I used a small scissors to cut the bottom out of the strainer bottle, (Don't cut out the whole bottom or the coarse foam won't stay in.)

I made slits all around the strainer using a Dremel Moto tool & a fine slitting blade. You can just make little holes with the soldering iron or the drill or a punch. You can cut little slits or teeth with a small scissors or through the strainer however you like.

Basically you have to take the top off of a spray bottle and cut away the plastic pump so you just preserve the nut. Move the bottom of the spray bottle with the scissors and add the little slits or holes to allow the strainer to strain.

Drill a 7/8 hole through the lid of your kitchen canister. Stick this trainer bottle through from the outside and put the nut on from the inside and tighten it. You can use a rubber gasket, but if you make the bottle fit tight it's unnecessary. I put a small o-ring on the pump, so it's sealed inside the neck of the spray bottle when I pushed it from underneath.

I made a hole for the power cord to come out of the lid and using the razor knife) a slit in the lid, so I could actually position the cord.

Using the soldering iron I put about 60 holes around the bottom of the container ( but not actually in the bottom which sits on the sand bed.)

Stuff that canister with BBQ lava and your favorite plastic media. You can omit the lava but the weight helps keep things anchored. I use the zip tie to help secure the power head to the underside of the lid, by drilling quarter inch holes in a plastic flange on each side of the lid, and suspending the pump with the zip tie.

Cut some coarse filter foam to fit inside your strainer and make it fit kind of tight. Mine is actually a bit too loose because I ran short.

Put it in the tank and before you turn it on adjusted by the thickness of the sand bed but nice until the skimmer sits at the level that you want to maintain your tank water.

I did not make enough little slits in my strainer, and I actually added some holes around the perimeter with a ticket punch to increase the flow. There is a tiny bit of coarse poly screen which keeps the intake sponge from getting into the pump intake. 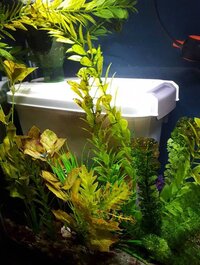 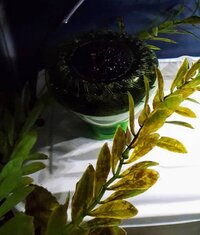 Since this is not a floating skimmer you must make sure that the slits in it are long enough to allow some fluctuation in the water level without disabling the strainer and sucking a bunch of air. Mine are minimal and I will be remaking the strainer a little bit to allow for more water fluctuation. My 55 gallon can only evaporate 1/2 gallon before the strainer becomes ineffectual.

By the way since this is all soft plastic you really do not need an electric drill. If you have an exacto knife you can make the holes you need for the cord and for the strainer.

I will take this open to clean it soon and take a photograph of the motor attachment by zip ties.

Caring For Your Snails Shell