I purchased a pair of lovely male bettas awhile ago, but there was a huge mix up (I paid for FedEx Overnight but for some reason they shipped through standard USPS), and as a result they were MASSIVELY delayed in shipping (as in, they shipped out LAST MONDAY, and they arrived TODAY...) to the point where I was expecting to receive a box of dead fish. They were miraculously both alive when I opened them up, but extremely pale and stressed. I warmed them up and put them in a shallow divided breeder box (with pump) so that I could keep a close eye on them and they wouldn't have to swim far to get air. Their light has been off all day, and they are still not doing very well this evening. They colored up a TON, but both bettas look a little skinny, although one has a very rounded belly (concerning, because they were supposedly fasted before shipment, and I haven't fed them), both have kind of sunken, crumply looking gill plates and big, swollen heads, and both are really not in the mood for moving in general (swimming up to the surface to breathe every couple minutes, then finding something to rest on again). I treated with Paraguard, and will try feeding them some pellets dosed with a mixture of Metroplex, Kanaplex, Focus and Garlic Guard tomorrow. Neither of them appear to have any ich cysts so far, or velvet that I can visibly identify.

Temp is 80°F in their little box 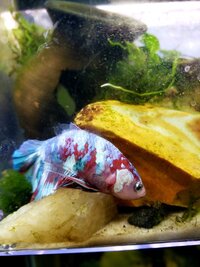 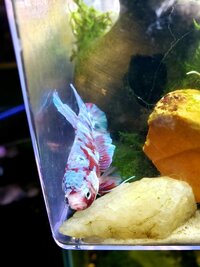 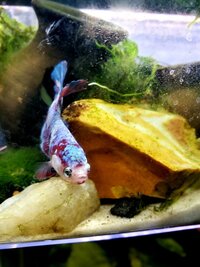 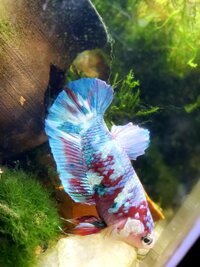 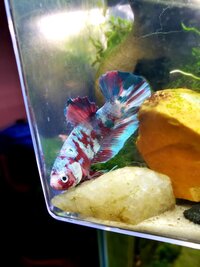 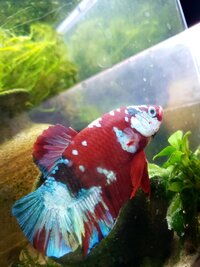 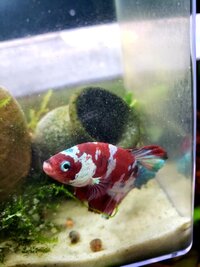 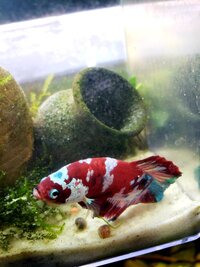 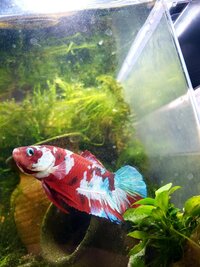 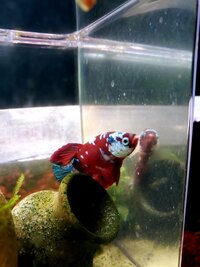 Give them some Roobios tea and Indian Almond leaves

Bettas are in the same condition this morning. Any advice will be appreciated

Have you fed them ?
They don't look like there is one issue to me ?
I would not give them any antibiotics unless you plan on completing a full length treatment .
That being said what makes you think they need medication ??
Feed them ! They have not eaten in over a week ..

coralbandit said:
Have you fed them ?
They don't look like there is one issue to me ?
I would not give them any antibiotics unless you plan on completing a full length treatment .
That being said what makes you think they need medication ??
Feed them ! They have not eaten in over a week ..
Click to expand...

I was always told not to feed a fish the first day they come in, so that they have time to adjust and de-stress. My main concern is the lethargy and the slightly swollen faces, as stated above.

I would be lethargic if not eaten for a week but other than that, I can't see anything other in pictures either. Stunning fish! I would perhaps give them frozen bloodworms or live daphnia.
You must log in or register to reply here.
Share:
Facebook Twitter Reddit Pinterest WhatsApp Email Link
Top Bottom