betta will eat anything!

My betta has been with my new cories only a few weeks now. I've been dropping some algae wafers in for the cories and my cute little betta, Tiger, will eat the wafer right along side of them! I give him his own betta flakes and freeze dried bloodworms. Maybe he just likes the company. I try to distract him with bloodworms when I drop in the wafer so he doesn't notice it and overeat. I'll have to post a picture soon...he is very gentle with the cories! Usually bettas are finicky eaters, but not this one!

It isn't going to hurt him to eat some greens as long as he is eating some protein too. But the major danger is that he is OVEREATING. He shouldn't be having flakes, bloodworms and wafer. A Betta meal is either a couple of flakes, 3 o4 4 pellets; or 6 or 7 bloodworms. Not a combination. One of the above. The result will be constipation in a major degree and Constipation can and has resulted in death to many Bettas. So if your little guy want to share the wafer, cut down on the other food - don't stop it, but cut it in half or so; or feed the Betta first and then put the wafer in so he is not as hungry.

oh I should've specified that I mix up what I give him...EITHER a few flakes or about 6 worms, I never give him both at once and never more than a tiny pinch twice a day.

That's good! He can have variety if he wants it. You really are very lucky to have a Betta who will eat that way. They are mostly picky eaters and will only eat one type of food and are quite stubborn about it.

yeah it's very true my two are completely different, InarI hates flakes he won't even go near them. TenshI on the the other hand loves both flakes and pellets. I haven't tried blood worms yet but I do want to see if either or both of them will take them. Its funny how much personality they have
OP
M 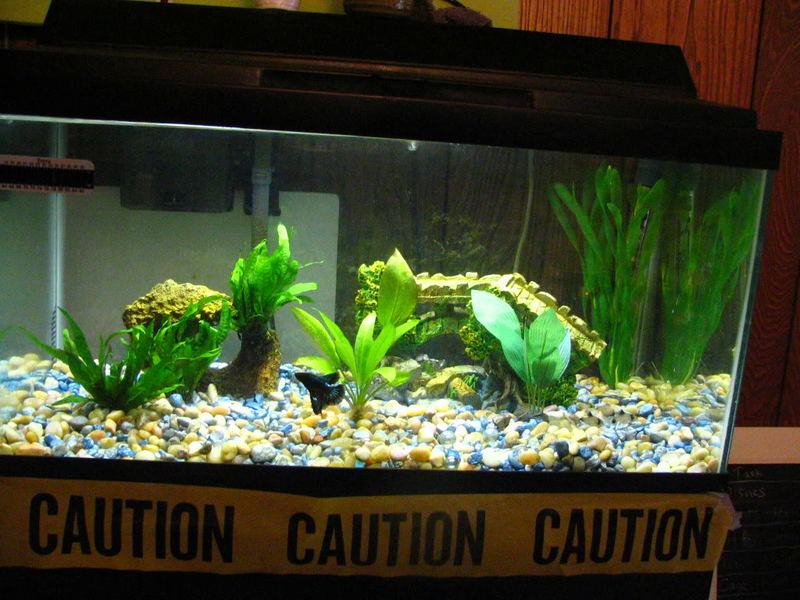 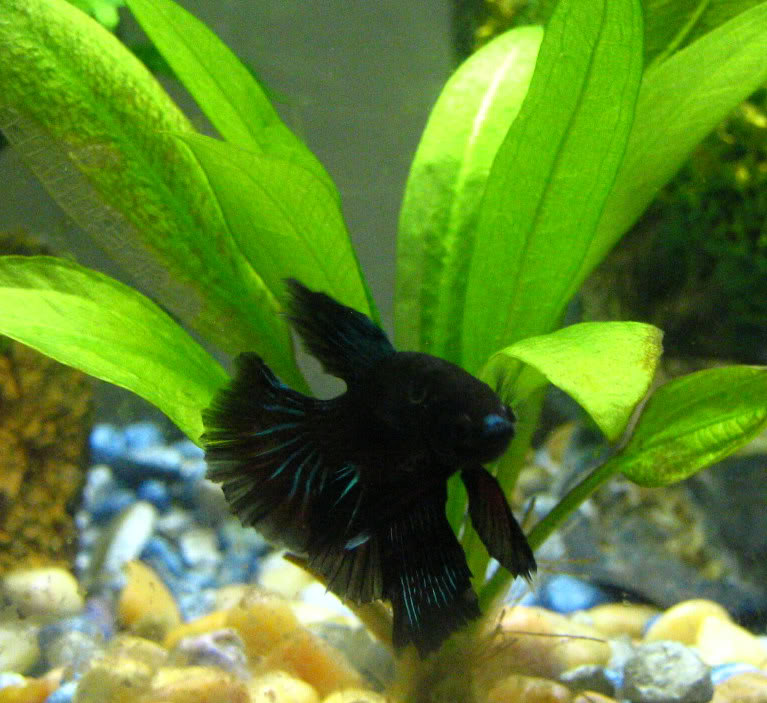 Here is my adorable betta, Tiger, with bright blue lips! (working on getting more plants)
sorry the pics are kind of big!

Hello Tiger, it is so nice to meet you. He is darling, and so full of himself! That is great! It shows a lot of personality. Are his lips blue all the time or just reflection from the camera?

Thank you so much for the lovely picture. It is a keeper.

Again, Tiger, it is nice to have you join our forum.

Great pictures!! That is quite a mansion Tiger has there!! Does he even notice he has tankmates??


Thanks for sharing! Tiger is GORGEOUS!
OP
M

He will play around with the other fish during feeding time but he definetely knows his mom! and his lips are always blue! He's definetely a cutie-pie ;D I'm very proud!
D

Good for you!! You should be proud of him!!
I

he's so pretty I wish my male would get health and start looking pretty too :S he is very beautiful i'm jealous anyway good luck and ur very lucky to have a betta that beautiful

I don't know what happened to your guy, but my little guy only now looks pretty, he went through a very bad case of fin rot where all he had were little stubs of fins. Its amazing how much happier they are not in a little bowl!!!! So I'm sure he will be healthier in no time

Where did you get him? He looks like a Delta or a Halfmoon. His fins don't look like a Crowntail or a Combtail. Did you purchase in a pet store or a breeder?

Tiger, you are very pretty (I know Boys are not supposed to be called "pretty" but he is pretty) I love the blue lips.

Its interesting you bought that up Rose, Tiger does seem a little different from the "regular" Bettas. I did get him in a lfs in alittle bowl next to all of the others. But he is tiny, always has been! He's maybe 30% smaller than the majority of Bettas I've seen. So I'm not really sure what he is!

As far as size, he is probably a large fry; and very young. His fins do not look totally developed yet, but you did say that he had finrot. Are you sure or could it be that he is a baby and you just got him before his fins were completely grown? I really believe you have a Delta species as the fin is over 180 degrees. They are beautiful fish and they are not usually found in a pet store, only through breeders. Lucky you!

Ohhhh hes gorgeous! and so cute! very pretty specimen youve got yourself there! I agree with Chickadee, hes definitely not your standard betta! you should be very proud of your little betta!
OP
M

;D  I believe his fins ARE still recovering from the finrot. I'm actually not sure when I got him...(it was before I started recording everything :-\ ) But I'm sure I have him at least 6 months.
I looked at pictures online and he seems closest to the super delta? Wow, I really got lucky with him! It was the blue lips that got me hooked (=
I

wow what an odd trait to be hooked on blue lips does he kiss the glass when u come up to it? ???

Yeah the blue lips are so cool...never seen anything like that!
I

they are cute tho the blue lips i'm sure if I saw him in the LPS I would snatch him up immediately and take him home and put him in his own tank ;D well congrats on such a beautiful fish u really are very lucky to have him.