I wasn't able to get a good photo with this guy constantly moving, but I wanted to get your guy's input on this bump on my betta's face on his right side. It has been there for a couple months now and has gradually gotten a tiny bit bigger (the second photo is from when I first noticed the bump). I think it looks like a tumor (the mass is underneath the scales, not growing on top like something fungal or parasitic if that makes sense), but ive read that tumors in bettas are pretty rare. I'm worried that it is affecting his ability to eat. He's less interested in food and it seems like it's more difficult for him to chew now, but he still eats. Other than that he acts completely normal, he just takes a little longer to eat now. He's about 3 years old now and I didn't take good care of him when I first got him because I knew close to nothing of fishkeeping or the nitrogen cycle back then so I think that's why his fins are so messed up. But I've educated myself and have taken wonderful care of him for a couple years now and he's been very healthy and happy since then. Parameters are good (ammonia 0 nitrite 0 nitrate less than 10 ppm). Only tank mates are malaysian trumpet snails and he lives in a 20 gallon tank. Hopefully my pics are clear enough... 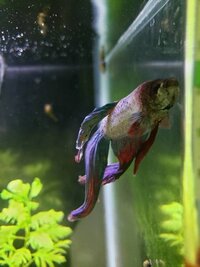 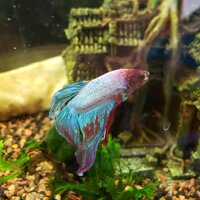 Yes that is a tumor. Unfortunately there's nothing you can do about it, but they're usually harmless and is just a cosmetic issue. Your betta's tumor is in an unfortunate position because it can grow into his mouth and prevent him from eating. Just continue to take good care of him.

Betta with Tumor on Fin?

Aug 24, 2021
BigManAquatics
Betta has a tumor, should I change his food?