Most of my tanks are live planted and don’t change much, but in my male betta’s tank, I don’t use many live plants so I can switch it up - which I do every month! (He really seems to enjoy getting to explore his new setups each time) I thought I’d share these last few months of the themes I’ve done.
(And yes, I test all plants and decor pieces for sharp edges before putting them in, I am also careful to reuse water and filter media because I’m switching out the substrate so there’s still bacteria and I don’t interrupt the cycle, etc.) 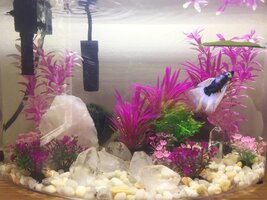 Pink and white - I found a variety pack of pink plants, and I had white gravel, so I paired those with some clear and rose quartz. This was probably one of my favorites 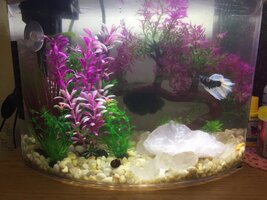 Still pink and white: I found this tree, and I switched it up a little, bit I didn’t like it very much (too dark) 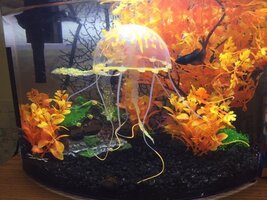 Orange and black / Halloween: (Couldn’t find a picture of the full tank with Crow in it, Lady was in it all of three days while Crow was away watching the eggs) This was the extent of my decorating for Halloween. I found the fall tree and orange plants and decided to pair them with the black gravel. I thought the little house looked rather witchy and it had orange. The jelly fish was kind of an impulse (it was kinda like a ghost idk) and I ended up not really liking it, but the fish really loved swimming up inside it and resting on top.
Another thing to note, I ordered the coral thing in the back as it was advertised as a "Soft Silicon" but when it arrived it was pretty stiff, so I didn't want to risk it tearing Crow's fins. In the end I decided to put it just behind the tank, and it added a nice backdrop without the danger 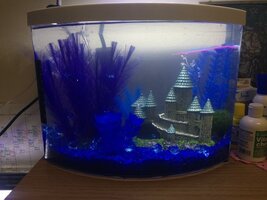 Blue: this one was surprisingly challenging to find things for! The store only had ONE bag of this gravel and I nearly missed it and settled for something else. I also added in some plastic pieces that practically glowed. The castle was adorable and had a blue roof, so I excused the rest of it for not being blue. Crow really liked the castle, it’s probably been his favorite decoration.
This didn’t be come out very well on camera so it looked MUCH better in person. 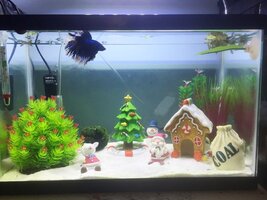 Red and green / holiday: again, this is my extent of my decoration for the holiday (so far at least lol). You can also note that I upgraded him from a 5 gallon to a 5.5 gallon. I decided to try a “sand” for more of a snow feel. I obviously found some very holiday themed decor, but I also put in my fake plants that were red and green to kind of fill it up a little more (still too sparse for my taste honestly)
(Yes, we’re battling a bit of fin rot at the moment but it’s fine I know why it happened and it’s getting better)

Anyone else do themes with any of their tanks? Feel free to share! I’d love to see them

Love it!!! how nice it looks in each picture.

I almost splurged in tank decorations for Christmas but chickened out. I'll definitely try it next year.

Love it!!! how nice it looks in each picture.

I almost splurged in tank decorations for Christmas but chickened out. I'll definitely try it next year.
Click to expand...

If you're looking at christmas specific decorations, they often go on sale after christmas time's past!

Oh yeah, forgot to mention, my eventual goal is to do every color before I get done with school for the year (I should be able to make it) and then when I get home for the summer I'll temporarily redo my 20 long with each color in its own section to make it a rainbow... now sure how well it'll work but we'll see!

These are so cute -( I know I'm jumping from my thread to yours but) I literally love all your designs. Looks amazing and particularly like the orange theme!