I recently got a baby betta from Petco. It was labeled as a male but with its size and the fact that I’m pretty sure I’m seeing an egg spot, I think it’s a female. Would anyone be able to tell me the tail type? 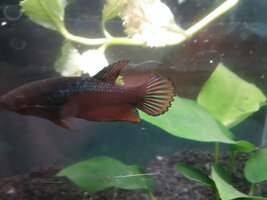 Looks like either a normal plakat or VT. I'm counting 2 rays, or one split, in each individual tail ray.

If the analfin doesn't start growing a bit then I'd lean towards normal plakat, she has the right coloring for it too.

That is not at all a delta, that is a veiltail.

I’d have to agree that I don’t believe it to be a delta. I was leaning more toward plakat or the VT. This is the second baby betta I’ve gotten that was labeled a male but is most likely a female. Like, come on Petco!

Oh, sorry for the double post but would it help to mention that the top fin is much larger and not as pointed as in the picture? He/she was swimming when I took that.

Maybe it's just the picture, but does this look like a wild betta species to anyone else? Reminds me of an Imbellis. Could just be the dark coloring with the blue green iridescence messing with me.

I mean, I can see where one would get the idea of it being a wild type with the coloration. What’s the odds of the happening with a Petco betta? I’d imagine very low.

I hope none of you think I’m shutting y’all down. I’m thankful and open to any idea y’all have.

For sure not any sort of wild type betta, it is a betta splendens. Most non fancy plakats found in stores are a more natural coloration.

This is my normal plakat, about as natural coloration as you can get. I bred her to a HM plakat and all the females turned out just like her. 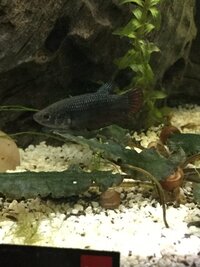 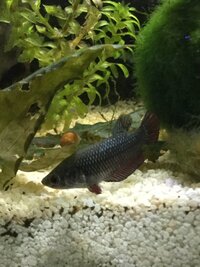 I mean, I can see where one would get the idea of it being a wild type with the coloration. What’s the odds of the happening with a Petco betta? I’d imagine very low.

I hope none of you think I’m shutting y’all down. I’m thankful and open to any idea y’all have.
Click to expand...

I will agree that it's not likely a true Imbellis, but I've read that some breeders have been working on more hybridized lines, so it's not completely out of the realm of possibility that one would end up in a big box pet store. The domesticated betta is already a hybrid of a couple of wild species, so it might be to subtle for your average petco worker to spot, especially if it was a baby.

Well, with the plakat the tails seem to be a more perfect D shape, if that makes any sense at all. My betta has the extra rays, so would that still be a plakat since it’s more indicative of a VT?

Depends on what plakats you are comparing them to. There are halfmoon/delta plakats which have straight edges and a D shaped tail with at least 2 branches in their rays, then there's the normal plakats that only have 2 rays and often have the spiky bits on the edges.

A female VT, once she's of a good size/age, will almost always develop an ever so slightly drooped and pointed tail like their male counterparts. Some female VT has very large fins, nearly like that of a male's. Their dorsal and analfins are also longer than any other fin type in my experience.

Ah, so if it’s a plakat then he’s just a normal plakat.

She, yes Body shape is too wrong for a male, very plump in the belly area.

A normal male plakat will look like this. At this point I admit I’m just bragging about MY BABIES <3 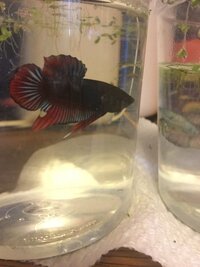 It’s a she then? Goodness, this will be the second “male” baby to end up being a female. I’m beginning to think Petco is doing this on purpose lol!

Betta with tears in tail?

What type of betta is this?