Betta Swim Bladder Not Going Away

Explain your emergency situation in detail.

I got three ghost shrimp to help clean up the tank a bit. After acclimating them and putting them into the tank, I realized one of them had a broken tail but was still alive. My betta has eaten it before the day was done. I made a dumb move and only skipped one of his meals before feeding him like normal. I noticed he was floating and bloated when I was performing a water change so I got rid of the shrimp and started fasting him that night. He seemed fine two days later, so I fed him normally (except this time I pre-soaked the pellets, normally I don’t do that) and he was fine for a few meals. Then I noticed he was bloated again, so this time I fasted him for three days and fed him a portion of a frozen pea that I had boiled, cooled, then stripped the skin off. He seemed completely fine this morning and was swimming around happily, but I wanted to make sure he would be fine so I didn’t feed him. I came home from school and saw that he was even more bloated than before and was floating on his side when he wasn’t hiding between the filter and the wall of his tank. I’m afraid to do anything like an epsom salt bath because I’m afraid to mess things up even worse so I haven’t attempted one of those yet. I’m just really worried and I don’t know where to go from here.

I filled out this template and attached a picture of Gatsby at the bottom. He hasn’t dulled in color and looks completely normal - just very, very bloated. Please help.

Parameters
Did you cycle your tank before adding fish?
Yes
What do you use to test the water?
API text kit
What are your parameters?

Illness & Symptoms
How long have you had this fish?
About a month and a half
How long ago did you first notice these symptoms?
1 week ago. He ate a ghost shrimp and I made the dumb decision to still feed him normally. I noticed shortly after. The ghost shrimp have since been given to a friend.
In a few words, can you explain the symptoms?
Bloated, floating, hides behind the filter and heater.
Have you started any treatment for the illness?
I fasted him until he seemed better then fed him. He was fine for a day or so until I noticed he was bloated again. I fasted him for three days and gave him a bit of a pea and he seemed fine this morning. Came home in the afternoon and he was even more bloated than before.
Was your fish physically ill or injured upon purchase?
No.
How has its behavior and appearance changed, if at all?
He still acts eager and wants to eat anything I put in front of him. All that’s changed is that he is bloated, constantly floats (now he’s floating on his side rather than floating straight, which is how he was floating before I gave him a pea) and likes to hang out behind the heater and filter more. He occasionally swims around a bit before going back behind the filter. He does seem a bit more skittish though. 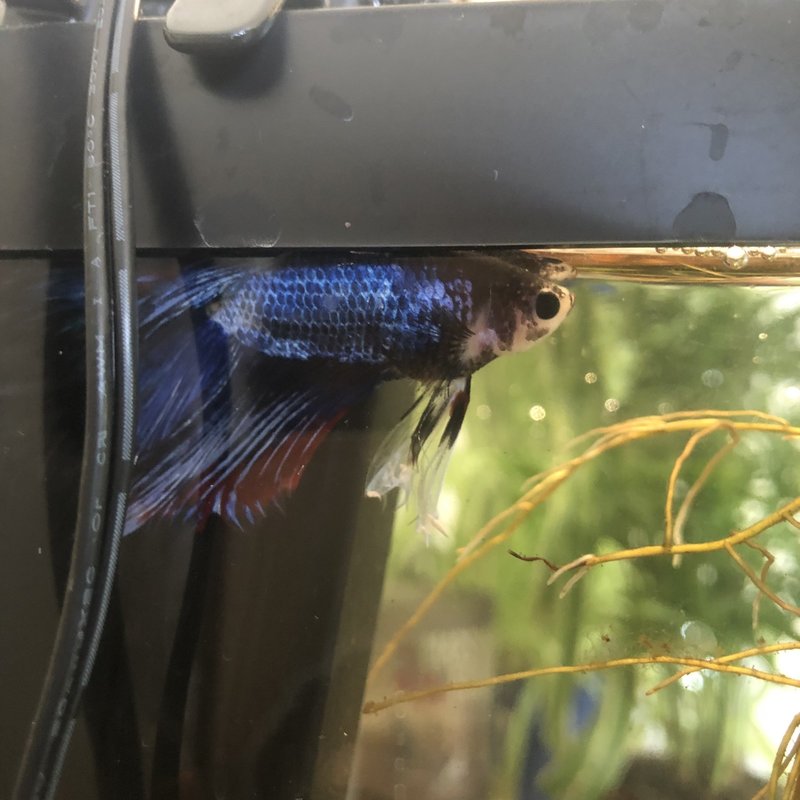 Taken a few minutes ago. Thanks for reading and I hope you can help.
Also, he does have some tears in his fins! Those happened awhile ago and haven’t gotten any worse.
OP

Brief update: I just saw him poop a ton of something. Might have been the pea. Still bloated.
OP

Sorry, here’s another update. I think Gatsby pooped again and he isn’t bloated anymore. When can I feed him again? If he becomes bloated again before feeding him, should I feed him another pea?

Fast him for one day and feed him only two pellets instead of three, you might be overfeeding him a little bit.
OP

Gatsby was swimming around fine but I just went and checked on him and he was bloated again and floating behind the filter. He seems to be getting better but just ends up bloating again. Should I try another pea?

nono, more food will bloat him even more. The floating must be due to gas buildup in his stomach, which means he has to fart. Betta swim bladders are near their tails.
OP

Sharkaroid said:
nono, more food will bloat him even more. The floating must be due to gas buildup in his stomach, which means he has to fart. Betta swim bladders are near their tails.
Click to expand...

Okay. So how do I get it to go away? He’s still bloated (even more than before).
I’ve attached some pictures of him from a few minutes ago (please excuse his wacky fins, those were torn awhile ago and healed odd) 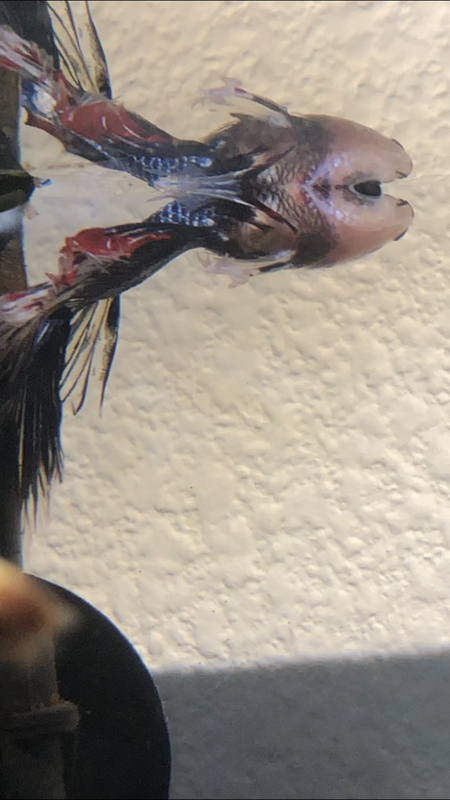 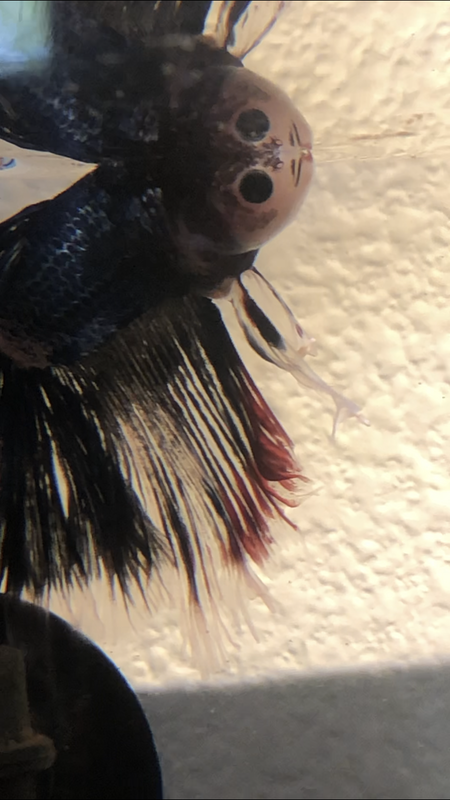 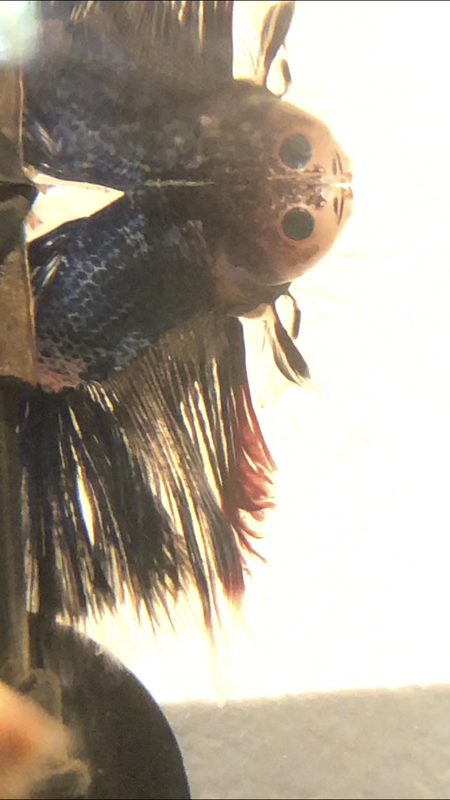 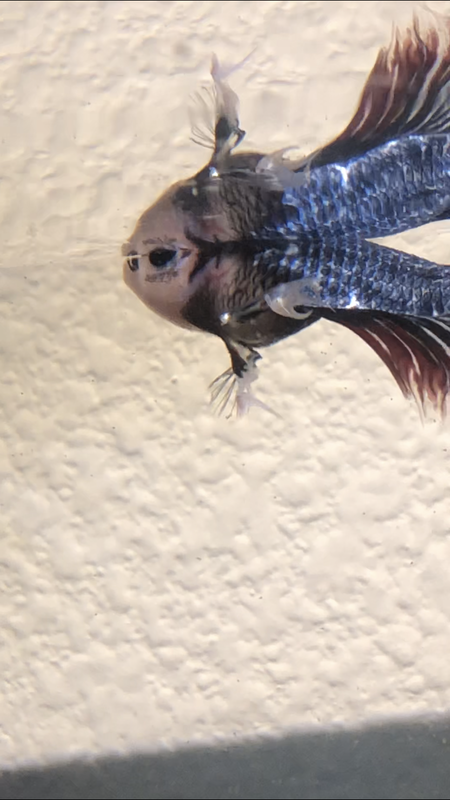