I recently picked up a quartet (1M, 3F) of Betta sp. ApiapI from Singapore. I love the fish and hope to breed them, however my male is not exactly a strapping young gentleman. He gets around okay, but he certainly shows signs of age with an arched back, struggling to reach the surface, and not really being able to hover. He eats and has definitely paired up with one the females as both display a much brighter coloration than the other 2 females. Currently the 4 of them reside in a 10 gallon with a school of 5 cpds run by an under gravel filter. Parameters are ammonia, nitrite, and nitrate roughly 0, oh around 6.4, and negligible GH and KH. Lots of tannins thanks to chattapa leaves and seed pods.

Ultimately my question is this: How can I get this geezer to spawn so I can get some younger males? If I can, is it a good idea or should I try to find a new male to add in? In the event I can locate a new male, is Betta sp. ApiapI capable of cohabitating males in a 10 gallon? The guy I got them from said they would be too aggressive.

Thanks for the help, and hi!
C

Most would say a 10 gallon is too small for all of those fish except for one by themselves, or maybe just okay for a tiny school of cpds.
If you get a bigger tank, not sure how big you can get, but a 30 gallon would probably allow for two males and a harem of females if it's really-really nicely planted.
Obviously these guys don't sound as aggressive as american petshop fish, so you may not have problems now, but could if you add another younger male, and would have a lot of ammonia too.

Speaking of ammonia, what do you mean by all the tests are nearly zero?
Does this mean your ammonia is about .1? Or nitrite is? Or did that mean just the nitrate is probably less than 5 but not zero?

That male doesn't quite sound fit for breeding, but it's possible he may get the job done, breeding is really demanding on a male, so if he can't care for himself it's possible he may die or give up trying to raise the babies.
If he hasn't created a bubble nest it's unlikely he will unless better conditions are met, though he may not ever make a nest.

American bred bettas are usually best started around 3 months of age or so, dependong on how fast they reach maturity, and are usually bred until they are 1-2 years old if they're kept for that long.
A lot of the males we get in our shops are shipped there around 6-8 months and they sit in the store for a few days to months before going home, so they don't seem fond of the idea of breeding, but it can be done.
You may want a male who isn't grown much yet, or one just barely a few months old.

Good luck to you! It would be very cool to see photos of these fish and your tanks, and see you upgrade to a larger one! I think you might enjoy it a lot more since bettas are so active.
OP
A 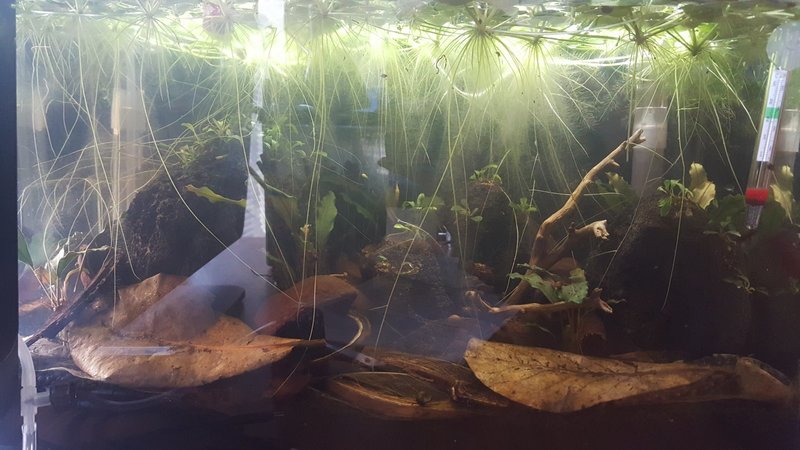 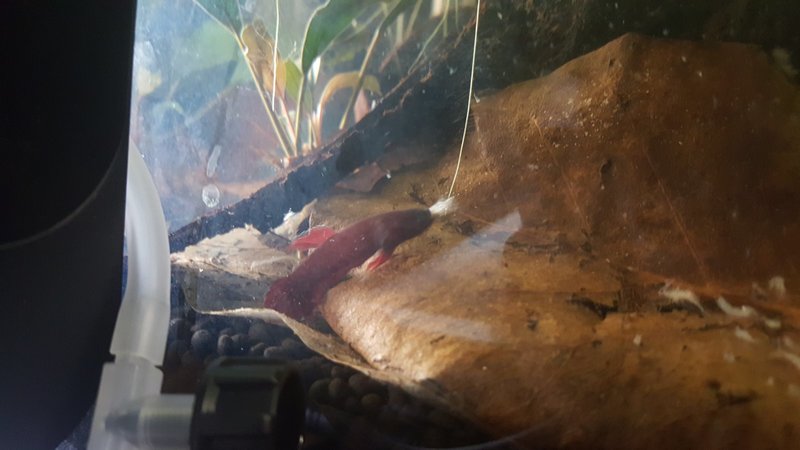 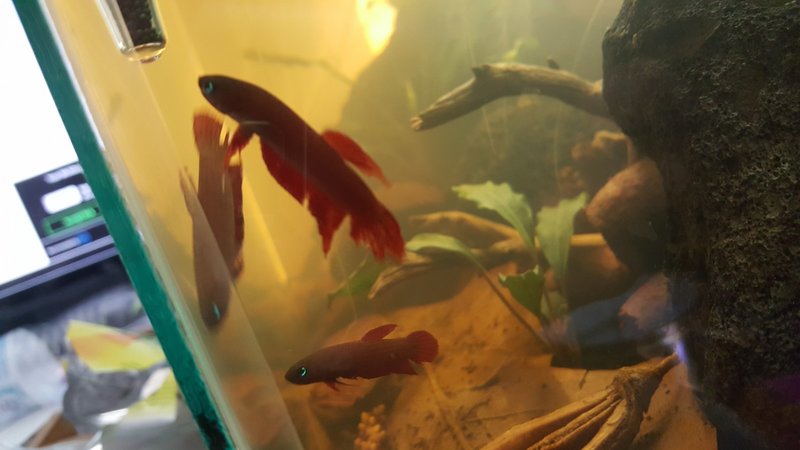 I figured out how to add some pictures for you guys. All levels read zero except for the day after a water change as my tap water has about 1ppm ammonia. As a result I try to keep water changes small and to a minimum. The frog bit keeps nitrate at zero much to my attempts to get my buce fertilizer but they're growing just fine so that's all good.

As of now he has not built a bubble must in the ~month of my ownership. Hoping to start up some whiteworm or grindal worm cultures to help with that. He also came in with some very rough fins and is just not finishing healing.

I'd absolutely love a bigger tank. Unfortunately I am the the college dorms where I am not allowed a tank greater than 10 gallons. I have debated sneaking in a 20 or 30 gallon from home but they're just isn't space for anything bigger. I have debated trying to find a way to get a 20 long in but I've already got 3 10 gallons and 2 2.5 gallons and don't want to add to the stuff that gets moved at the end of the semester.

If he builds a bubblenest it is probably going to be in a hidden area. Looks similar to coccina/burdigala types, which are "cave" spawners (they will also build nests under logs or leaves). Tank size is good, this is a very small species as are the margaritatus. Only thing I can think of might be temperature, which I would put up to 78-80 F for breeding, based on the preferences of the relatives. These temperatures might be too warm for the Danios.
OP
A

I have also read that reducing water level several inches can help induce spawning and most Betta spawning tanks I see are only half filled. Not sure how to do that with the under gravel filter, maybe cut the stacks or unplug the airlines. Would this be beneficial? The male can reach the top but it noticably takes more effort for him than for the females.
Share:
Facebook Twitter Reddit Pinterest WhatsApp Email Link