Amwhitern14
We purchased my betta from a pet store as a very small baby in May and were told it was a male. After some research I believe they were wrong... what are your thoughts?? This picture was about a month or two ago but it’s the best one I have.

georgelee1000
Hard to tell at this age.
jacob thompson
Looks more like a female to me. Dull color+short fins.
Kalyke
There are what is called "cellophane" bettas which are very "clear" and no color. They are kind of like X-ray tetras where you can see their organs under their skin. Also a placat looks somewhat like a female. It will develop as it gets older. I personally like females. I just did this: I googled "Cellophane Placat Male Betta fish" Look at google s, and compare. They look just like yours. I also think the cellophane bettas are somewhat rare. I know that sulpher, green and some others are valuable.
Repolie
Female. There's an egg spot and the ventral fins are shorter than the analfin. Also any betta can be dull coloured and even males can have short fins, they're known as Plakat bettas.
mcloomis

Female. There's an eggspot and the ventral fins are shorter than the analfin. Also any betta can be dull coloured and even males can have short fins, they're known as Plakat bettas.
Click to expand...

agree. females have eggspots. but there is a chance its a male, considering they sometimes have them to avoid other, more menacing males
Repolie

agree. females have eggspots. but there is a chance its a male, considering they sometimes have them to avoid other, more menacing males
Click to expand...

Yes males can sometimes have an false egg spot, but adding on that the ventral fins are shorter than the analfins is another supporting detail of a female betta. Also males having false egg spots are unlikely.
Popopapy1
Female.
Gena Krein
I vote female.
VeiltailKing
Definitely female.
CanadianFishFan
Easy small fins, no beard, egg spot and cute. Female possible koi plakat.
Demeter
100% female. Look at her insides. See that pale yellow/white area in the shape of a triangle? Those are the ovaries and last time I checked you will never see them in a male

Here’s a good pick of the yellow triangle I’m talking about. This fish is an inch or so long and can be easily sexed. 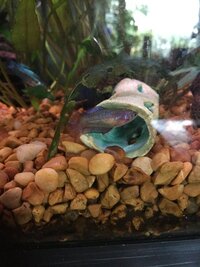 BettaBeetlesandBugs
Female. I bought a “male” koi at petco once and it was a female.
CanadianFishFan

100% female. Look at her insides. See thag pale yellow/white area in the shape of a triangle? Those are the ovaries and last time I checked you will never see them in a male

Here’s a good pick of the yellow triangle I’m talking about. This fish is an inch or so long and can be easily sexed.
View attachment 478760
Click to expand...

Ah! I forgot, we can see her eggs too! Its friday morning . So for sure female. I noticed too you can see eggs in clear betta.
Hard to see but you can see Miss Lilly's eggs too. 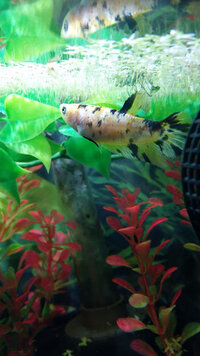 Demeter
Clear as day, the eggs/ovaries never lie unlike egg spots
Gena Krein
She's beautiful! You are soooooo lucky. Koi are lucky!
Gena Krein
Frisbee
Several months ago (some time around October I think) I bought a baby betta (labeled as baby girl). I love this betta and he/she has been growing lots. I did not doubt petco labeling... until now. It's fins are now very long (well for a girl at least) and it is very aggressive towards other fish (and some inverts), and today I noticed what appears to be a bubble nest. This is my first betta so I don't have the most experience an I have never seen a bubble nest in person, but from what I could find on the internet it looks like it. I have some old pictures from a couple months ago I will be adding an I will try to snap some new ones as soon as possible. Has anyone else ever had mix ups with genders at petco? I very well could be wrong (as I said, I'm not the most experienced in that department). I would like to hear your guys opinions on the subject.

Edit, here are the older photos, will be posting some new ones shortly. 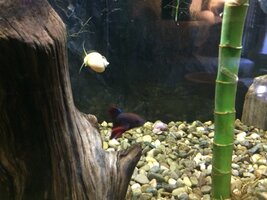 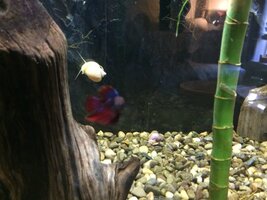 Demeter
Happens all the time with petco babies. I’ve had it happrn twice.
SM1199
Sounds like a male to me, especially the bubble-nest building, but females can also do a lot of these things as strange as it might sound. Petco can definitely mix up betta genders, especially when they are babies. I've even seen male adult plakats labeled as females. Pictures would be very helpful!
Demeter
Blurry pics but looks like a cute male plakat.
Frisbee
I just edited my original post to include some photos, I will try to get some better ones as soon as possible.
WinterSoldier.
Looks like a male. Petco (near me) mismarks their bettas all the time. I saw a king called a koi and a koi called a plakat halfmoon
Frisbee 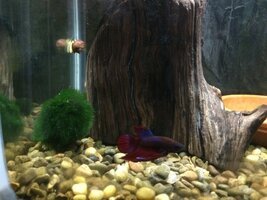 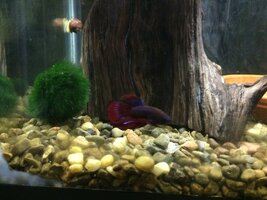 Here are some photos I took just this minute,
WinterSoldier.
Now we see it from this angle I can say there is a possibility of it being female. But the fins are still rather long
Frisbee
Thanks for your guys help! Will be changing his name from Rosie to Rosencross. I'm pretty sure it made a bubble nest and all my family thinks it's a boy, so I'm assuming so.

P.S. he is also still very young and still growing so his fins are getting longer by the day, I think he is a little over an inch in length (not including the tail) and a little over an inch and a half if you include the tail (that's just my estimate from putting a ruler up to the glass while hes begging for food)
SM1199
Those long ventrals indicate he's almost certainly a male
DuaneV
The 100% certain way to tell is if there is an ovipositor or not. If there is an obvious white bump near its anus, its a female.

Females also make bubble nests and can be super aggressive. Those aren't male only traits.
Frisbee

Females also make bubble nests and can be super aggressive. Those aren't male only traits.
Click to expand...

I have never seen any white bump in that area, and his fins are still getting longer. He really looks like a male plakat from all the pictures I've seen, but like I said, I'm no expert in that department. I'll put up some more pics in a little bit.
DuaneV
The white ovipositor would be obvious, so Id say its a male.
CanadianFishFan
Agree with its male.

Nov 12, 2021
JustAFishServant
Is This Betta Breedable?