About two months ago, I bought a male betta with a pretty severe case of fin rot. I put him into a 2 gallon (though i moved him into a 5 gallon in about a week) and treated him with Kanaplex. However, two days after I got him, I noticed that he had ich. I was advised to try treating it with heat, but, since the heat was accelerating his fin rot, I began treating him with JBL Punktol after a week or so of heat treatment. I stopped the Punktol treatment after 8 days, since I stopped seeing any ich on the 5th day. Then, I continued doing water changes every three days for about a month. Three weeks ago, I tried doing daily water changes for his fin rot, and after a week of doing so, I tried doing a salt treatment. I used a new salt I'd bought online, which, compared to the salt I'd previously been using, didn't really seem effective. On the contrary, his fins seemed to be slightly receeding. I am currently considering doing another Kanaplex treatment, or maybe one with Sera Omnipur, but I'm concerned about exerting him too much and doing more harm than good. How should I go about treating his fin rot until he's fully recovered? 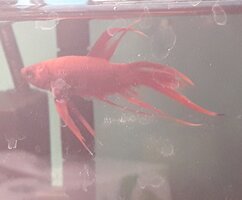 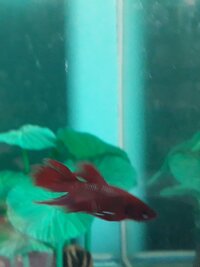 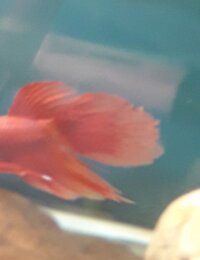 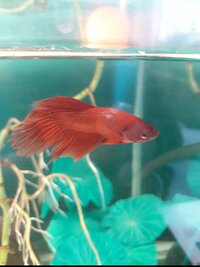 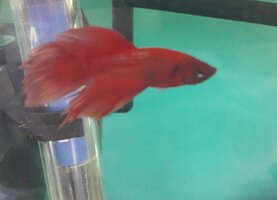 The first picture is from the day I got. The second one is from 2 weeks into his treatment, the 3rd and 4th one are from a week ago and the last one is from today.

Can't tell in the pics if they still rotting. Looks more like things just need to grow back now to me.

Are you sure he had finrot? Looks like he has been in a betta fight and been beaten pretty badly.
If he had ick, it won't go away after 8 days of treatment, you may still have it dormant.

Can't tell in the pics if they still rotting. Looks more like things just need to grow back now to me.
Click to expand...

Thanks for your reply! They haven't grown back at all in the past month, though.

Are you sure he had finrot? Looks like he has been in a betta fight and been beaten pretty badly.
If he had ick, it won't go away after 8 days of treatment, you may still have it dormant.
Click to expand...

I don't know whether he's been in a fight or not, but he wasn't in an tank with any other bettas when I bought him.
As for the ick, should I do another treatment to make sure it goes away?

If you stopped treatment for a while, you need to start over as you don't know what stage the ick is right now.

I do at least 3 weeks for ick. Maybe overkill, but if I sometimes do two rounds of 3 weeks with medicine. I dpn't do salt or temperature increase because I often have something that won't tolerate it. Luckily, I haven't had ick for the last ... I don't know, long time.
You must log in or register to reply here.

Acclimating Fish to Your Aquarium