Hello everyone, my betta has fin-rot and has been suffering from it for a while now. I checked all his parameters and they all look good. His tank is a 10 gallon planted aquarium with a heater and a sponge filter. The tank has been cycled for over a year and I regularly check the parameters. He shares his tank with ramshorn snails and cherry shrimp. He has had mild fin rot for about 6 months now and I just don't know what do to. I gave him salt baths for a couple weeks on and off and the fin-rot would get a little better but never cured. I didn't want to keep doing them since I was worried it would cause kidney failure. I know his aquarium is clean so thats not the problem. Just as of recently he has gotten a lot worse with loss of fins and has spread to his scales on his body. I've decided to move on to medication as a last resort. I currently have Kannaplex and API fungus cure on hand and I've read these both work for fin-rot. If there are better medications please recommend. I have set up a quarantine tank but have yet to add any meds. I'm not sure how severe his fin-rot is and which medication is least harmful but still works. He does have a bump on his dorsal fin and analfin that developed with the fin rot and I think it may be scar tissue but i'm not sure. He. looks so sad and I love him so much, I don't want to give him the wrong medication or stress him out too much. Please help! 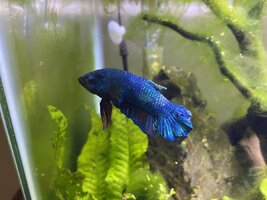 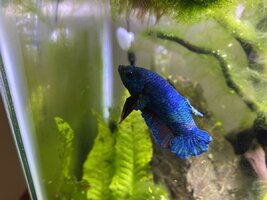 Tank
What is the water volume of the tank?
10 gallons

How long has the tank been running?
Over a year

Does it have a filter?
Yes

Does it have a heater?
Yes

What is the water temperature?
Ranges between 76-80 F

What is the entire stocking of this tank? (Please list all fish and inverts.)
Ramshorn snails and Cherry shrimp

Maintenance
How often do you change the water?
Depends, I've been doing about 2-3 25% water changes more recently since his fin-rot worsened but before that I was doing once a week 50%-25%

What do you use to treat your water?
I've been using API Stress coat recently but before I was using Prime water conditioner

What do you use to test the water?
API freshwater test kit

What are your parameters? We need to know the exact numbers, not just “fine” or “safe”.

Feeding
How often do you feed your fish?
4-5 times a week

How much do you feed your fish?
A pinch (give or take) but he hasn't has much of an appetite in the last 2 weeks

What brand of food do you feed your fish?
Hikari

Do you feed frozen?
Not very often

Do you feed freeze-dried foods?
Dried, I switch between blood-worms, daphnia and brine shrimp

Illness & Symptoms
How long have you had this fish?
About a year and a half

How long ago did you first notice these symptoms?
6 months ago if not longer

In a few words, can you explain the symptoms?
It's very obviously fin-rot, he has rotting fins with black spots on the tips, just recently it has spread to his body.

Have you started any treatment for the illness?
I have tried salt baths

Was your fish physically ill or injured upon purchase?
No

How has its behavior and appearance changed, if at all?
His fin's have changed to a black color on the tips where it has rotted off, and has recently developed black spots on his scales. He also has clamped fins and is dull in color. He has less of an appetite and is not very active.

Start doing daily water changes of 50%. Clean water is the best remedy for fin rot, only use the medication if actual fungus appears or anything more sinister develops on the wound.

Start doing daily water changes of 50%. Clean water is the best remedy for fin rot, only use the medication if actual fungus appears or anything more sinister develops on the wound.
Click to expand...

Do I still do 50% water changes, even though my ammonia levels are at zero?

Do I still do 50% water changes, even though my ammonia levels are at zero?
Click to expand...

Yes, still do it because daily changing will allow for constant pristine conditions which will aid the recovery process.

Yes, still do it because daily changing will allow for constant pristine conditions which will aid the recovery process.
Click to expand...

When should I start medication? how bad should I let the fin-rot get before adding medicine?
You must log in or register to reply here.

Mar 6, 2021
BettaCyrus
Nothing is working for Betta Fin Rot