Betta Fin Rot Or Color Change Or Something Else?

So a little over 2 months ago I rescued a betta from walmart. He was a pale yellow color, black eyes, black mouth, black gills...surrounded by all the various colors of red, blue, purple bettas you typically see. In a sense, he was the ugly duckling of the shelf, and I didn't think he stood a chance of going home with anyone else. His name is colonel mustard.

His fins looked a little ragged when I got him, but there wasn't any black on them. I had him in a 2.5 gallon qt tank for a few weeks while his 10 gallon was cycling. Before I moved him over I noticed a spot right in the middle of his tail fin that looks translucent, or see through kind of. I thought perhaps the conditions in that little qt tank had just gotten bad and moving him to his now cycled 10 gallon would help.

In the 1st couple weeks in his 10 gallon, the tips of his tail fin and his other fins started to regrow, they have that white shimmery look to them. But the see through looking spot in the middle of his tail fin was still there, and is still there. It isn't getting bigger, or really changing at all. Now there are dark patches right at the base of his tail, close to his body. They don't necessarily look like rot. But I'm still worried.

He swims around fine, eats fine, is still curious about everything. The only change I've noticed is that he seems to be getting darker in color, from pale yellow to a more golden yellow. Are the spots I'm seeing on him color change? Or should I be treating him for something?

He is alone in a 10 gallon, it is filtered and heated. I have all silicone decorations, except his hidey caves and I sanded down the rough edges on those. So I don't think these spots are any sort of injury.

Nitrites-0, nitrates-0, ammonia-0, ph 6.8, I use all the normal upkeep chems and do a 10-15% wc every week. Or a 25-30% every other week if I'm being lazy. I also have an indian almond leaf in there, people say they are good for bettas. Idk if it does anything, but it doesn't seem to be affecting my water parameters. Although the ph is slightly lower now than when I started the tank. Idk if the leaf has anything to do with that. Or I did start using a seachem dechlorinator/conditioner specially for bettas, and I think it said something about affecting ph. Do bettas like a lower ph? Could this have something to do with his spots?

I'm just so much more attached to him than I thought I'd be after only 2 months. I just want to give hime the best life. I've attached a pic where you can see the darker spots at the base of his tail, which I circled. But can't really see the transluscent spots in the middle of his tail. Though you can kind of see the white shimmery tips of regrowth on his tail fin. I will try to get some better pics later today. I took this a little after feeding him this morning, so when I walked back up to the tank he got excited and was all over the place. Lol! 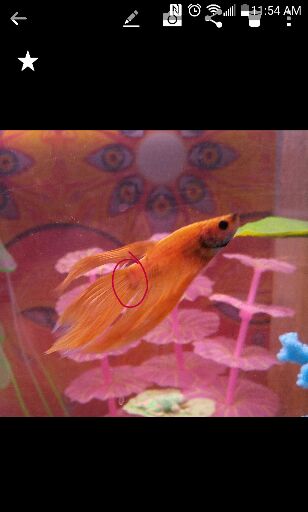 Well the quality of the pic on here isn't as good as it is on my phone. And you can't see what I'm talking about clearly. I will try to get better pics up later.

0 nitrates? Is the tank cycled??
Looks like he's got some bad ammonia burns around the gills. Not sure about his tail however

Well the color on the test for nitrates was kind of in between the color on the card for 0 and the color for the next step up. So idk, it is maybe 5-10? But definitely not too high, not even close. And I stated above twice that the tank is cycled. His gills have looked that way since I got him. I was worried at first, but it has been 2 months and they haven't changed. He doesn't look like he is struggling to breath either. In fact he doesn't look like he struggles to do anything. He swims about his tank with ease, all over it. He gets swished about a bit if he goes right under the filter, because the flow is maybe a bit strong. But he recovers quickly and easily.

He looks good to me. I wouldn’t worry about the dark spots near the base of his fins, they look like his natural coloration.

Okay well if it's cycled then it'll be between 5-10 cool. Yeah if the burns were bad I'm not sure they would leave, though maybe it is just natural coloring.

I really hope it is just a coloring thing. I've never had a betta that changed color, so idk what that is like. I'm guessing it is just my anxiety. I love my little colonel mustard! He isn't very pretty, but he is really smart and entertaining.
You must log in or register to reply here.
Share:
Facebook Twitter Reddit Pinterest WhatsApp Email Link
Toggle Sidebar