In an effort to reduce the risk of disease spreading, I have come up with the following for my breeding project:

A barracks of jars that self-siphon. I made one as a tester and it works great. These will sit inside a large tub, with solid colored plastic dividers against the jars so I can card and flare all of the males. The siphons will feed into the tub, which will have another siphon, this one made of small PVC pipe, drilled every few inches for optimum waste removal during water changes.

Each jar will have a few stems of water wisteria, again, for water quality control, and the large tub around them will have a bunch of hornwort (thank you shellyd2008). I'm also planning to try to fit in a few glued PVC caves and some driftwood, but we'll see how that goes. Going to be growing out some moss, too.

Each jar will contain a male, after growout. The large tubs will act as sororities at this time. Hopefully with some space between the jars, and the plants, aggression will be minimal. One barrack will contain sale and cull fish, the other will house breeders. If I end up making three, we'll do breeders in one, culls in one, and sale fish in one.

Each tub will be a closed system. If disease breaks out in one, I can remove the male's jars to a safe place and treat only the sick fish. The adult breeders I'm importing from Thailand will not be a part of the barracks system, so I'll retain my starting stock if anything should happen. Hopefully with daily water changes and a month of QT on the original stock, this won't be an issue.

The only thing I'll really have to do is add water to the male's jars, and remove the dirty water from the catch tubs.

Just wanted to share. I'm open to improvements/suggestions if anyone has them. 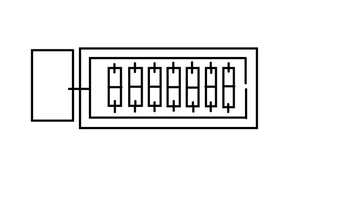 Like to see a photo once you get it done, although I can picture it in a general way. I've gotten good at manually siphoning a lot of jars at one time, but had thoughts like what you are talking about run through my head.

I would love to see the final result and yes, please post lots of pictures. I am going to take the plunge and attempt to breed and would love ideas for grow out tanks!
OP

Actually, FB, the plastic in those jars you have is probably thin enough to make the self-siphoning tank thingy. I have two of those (stolen from my dad's general store) and more on the way, I'm pretty sure a decent knife or razorblade will cut them easy.

Here's a picture of my tester jar. All you need is airline tubing and silicone. I discovered if you use a little extra tubing, you don't even have to silicone it to the bottom, just as long as it rests on the bottom of the jar. I think it would work better if the output tube stayed level. I have to manually stop this one's flow by lifting the tubing. 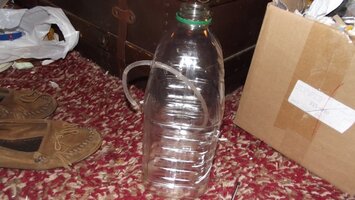 The plan is to use the large tub as a spawning tank, then as a grow-out tank. It'll be somewhere in the 12 gallon range, but with a massive footprint. I'll section off a small portion of one tub to use as a spawning area (or place a smaller tub inside, depending on what fits) and then, when the fry are big enough simply remove the divider and pull males out as I find them. My hope is that the females will be able to stay in the grow out tanks together, though that may or may not work out haha.

I understand the concept a little but can't wait to see more pictures (if possible). I've been brainstorming different things lately too once I start my breeding project. My main issue is not the water changes, but heating each individual container. I was just going to put them in jars, put those jars in a tub with water, and heat it. Is that sort of the same concept, or will they not be heated?

Otherwise, it sounds like a solid plan you've got.

sophi said:
I understand the concept a little but can't wait to see more pictures (if possible). I've been brainstorming different things lately too once I start my breeding project. My main issue is not the water changes, but heating each individual container. I was just going to put them in jars, put those jars in a tub with water, and heat it. Is that sort of the same concept, or will they not be heated?

This will work. You can also fill the jars with holes so the water gets filtered, at the risk of cross contamination. I use this last method for some of my adult bettas when they are in temporary barracks.

But the room I keep my betta fry in, due to the ducting of my central heating, is warmer than the rest of the house and stays a comfortable 78+ degrees so I do have to heat the jars in this room.

Of course in a few months my problem will be quite the reverse and I will be struggling to keep temps down, even during the last month the daytime temps were around 85 degrees. I will be forced to run the AC just for the sake of the fish.
OP

They will be heated. I'll have one of my "spare" heaters in the big tub that houses the girls, along with a minijet to circulate the water in there. That way everyone stays toasty. It will also ensure that temp swings during water changes are minimal, since I'll only be adding water to the jars, then they will in turn add water to the big tub, so everything stays within a few degrees all the time.
Share:
Facebook Twitter Reddit Pinterest WhatsApp Email Link