These little snails are the most beautiful snails!!!! They love their zucchinI
I can't seem to find all 3 at the same time though - they are very active!
( Roak - Thanks kb9plc ) 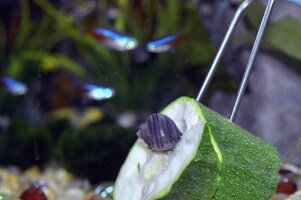 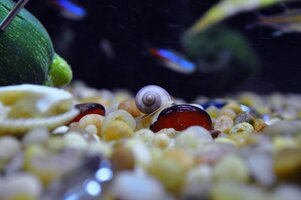 They are stunning! (Never thought I'd say that about a snail)
M

Omg I love their coloring... did he say what the parents colors were? They sort of look light blue with dark purple stripes (makes me want to see if my purples at my brothers are male and breed them with Doer my blue female...)

They are soooooooo pretty I am very jealous

monkeypie102 said:
Omg I love their coloring... did he say what the parents colors were? They sort of look light blue with dark purple stripes (makes me want to see if my purples at my brothers are male and breed them with Doer my blue female...)
Click to expand...

The daddy snail was a 'Magenta Briggs' snail. Pretty much, magenta shell with ivory foot and orange freckles and eyes. The momma snail was for the most part a blue snail. But she is a very light blue. She had a problem earlier on when the LFS DROPPED her Her shell repared itself, but she kinda of looks like a blue/ivory hybrid now. She is also my crazy clutch laying momma. She's tossed out more clutches then I can count. Thou not all of them are fertile.

That particular clutch threw 75% lavendar/white foot and 25% dark purple/bluish-dark foot babies. When the parentage involves a magenta, it is common for them to throw both dark and light babies. But a blue and a magenta will almost always throw some lighter colored lavendar/magentas. So if you have a blue and a magenta.... I'd definitley try and breed them!!! Super pretty babies! When they are born they are almost ivory with lavendar fading in at the shell curl.... as they get to M&M size they darken up and show their true colors. And you won't have any problems find them homes because purple-spectrum snails aren't really sold at the common LFS's. Well, not in the US at least. 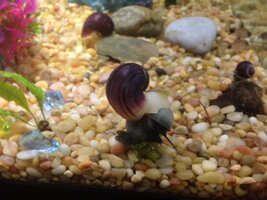 Dud those are the exact colors of my snails!!! Oh yes I will be breeding them definitely!!! I just hope I have a male purple as all my blues seem to be female

LOL it's kinda hit or miss I think. And it's not like it's easy to tell who is female and who is male LOL!!!! (difficult lilttle creatures!) I have noticed that if you have two snails that are generally the same age, the females tend to be slightly bigger. I dunno how much scientific truth there is to that statement, but it seems to be 100% accurate in my tanks. LOL If you have blue and purples, I'd put em all together in one tank and see what happens. I say that because if you put one female blue in a tank with all your magentas and you have more than one male magenta....... your poor female WILL get tag teamed. Seriously. She'll have like 2 'backpacks' on her. I've seen it happen!!!! (both of my magentas are males)

Oh one other thing. Obviously you want your ph above 6.0 for snail shells. But they seem to like higher ph's to breed. Like, 7.2 or higher. Just based on my various monitoring...

If you Ph is 9 I would be worried xD

And thanks for the breeding warnin! I have 2 confermed female blues that I will mix with my purples and see what happens! (Also I know all about the Ph stuff already haha)

Wow you got a ph of 9? Honestly, I can't say FOR SURE. The highest mine has went to is 8.6 and they were fine with it. I mean technically anything under 7 is considered acidic.... hence the lower you go, the more shell problems you have. Anything above 7 is basic or alkaline. So my educated guess would be that I wouldn't THINK the snails would mind a 9ph!

I've kind of got a plethora of various info I've collected thru my snail escapes.... I should put it all in one place somewhere. LOL! I'm really lovin' having a snail baby farm It gives me purpose. Hahahahahahaha (just kidding)

What's wrong with a pH of 9? Livebearers and Africans LOVE my kind of love-shack water.
M

Oh haha I always read about Ph level 6-8 are best I guess I forgot some species love more alkiline water...

Maybe I'll have to write something up. Put it in the snail section and see if a mod likes it enough to sticky it. Hey if it helps others, why not? I've done a lot of questioning and searching for answers because when I first got my mysteries I was a PARANOID momma. I got them tiny. Like SUPER tiny. Then I got my momma blue girl from an LFS and she started her crazy clutch laying (example: 3 in the last week and a 1/2)...... andddddd I went on the hunt for even more info. Then I got a clutch that produced 25 babies anddddd I went on a hunt for even more info!!!! (mostly because I wanted them to all live.... and I was told that was hard to accomplish sometimes). Then I needed to ship them out (insert even more paranoid momma sending off her first borns into the land of USPS). OMG I've definitley had trial by fire. Hahahahha
M

You should have seen the look on his face when I had my angelfish delivered.

....or until I take a trip to England and figure out how to bipas the TSA. "Snails? What snails? Those are golf balls in water. I swear." LOL
OP

I think a care sheet would be great! Seems like each one of us could contribute to it - a thesis of some sort
LOL
I have to agree - lots of trial and error Felicia but you seem to have the combo down now! And the fact you got so many live snails is really really good! I have heard that just by force of nature among other things, if you even get 5-10% of the batch hatching and living, you are doing quite well....

Well either that or the ratio is just evening itself out in another way in my tank. I mean I got 25 snails from one clutch...... and they all lived..... but I haven't gotten a hatched clutch since. It's actually a little frustrating. I think I'd rather get a few from each, then this!
Current clutch count: 4! (1 is looking dismal, thou) Yes. She laid another one. AGAIN. I should make a clutch thread. This snail is nutzzzz.

Thesis! Hahahahaha
It'd probably be as long as a thesis by the time we all were done!

Beautiful. I love the mystery snails! They are so cool looking and I love the color of yours!