Hello. This is my first time posting here. I notice this forum seems to be what I'm reading, though, when I'm looking for answers to questions I have about my snails. I didn't find anything on this question, so I figured I'd join and post.

I have a baby nerite snail in my ten gallon aquarium. There is also an adult nerite snail. The baby snail hasn't moved in awhile. When was last moving, it was preferring to stay on the glass towards the top of the water line; that didn't worry me. When it was preferring to stay near the top, I had placed some blanched carrot into the tank. During previous times when I had fed veggies, this little snail couldn't find the veggie or was muscled out of the way by the larger snail, so this time I moved the little snail on top of the carrot before the big snail got there. I figured if he didn't want it, he'd work his way back up the side of the tank. The adult snail never became interested in the carrot, so the baby snail was there a long time.

I'm pretty sure the baby-snail ate because it didn't move off the carrot and at one point was stuck on the side. I didn't, however, notice any bite marks. The snail is so small, though, it may not leave anything noticeable. At some point, the snail fell off the carrot and didn't move for 24-hours. I checked on it, and it didn't smell. I put it in a smaller container and observed. Eventually little antennae came out, so I put it back in the main tank. That was at least 48-hours ago. It hadn't moved from where I put it back, but I figured it may be hibernating. Today I noticed it was now laying foot-side up. I pulled it out and checked on it. It doesn't smell like anything at all. It just has the general smell that an aquarium has if you stick your nose to the water but nothing that's remotely strong or stinky. It's foot is way way back in its shell. I put it back into the aquarium foot side down and circled with washable marker on the glass where I placed it, but I'm still not sure if it's dead or alive.

How long should I wait before I remove it and consider it a loss? I don't really want an ammonia spike or bacteria to fester from a decaying snail (I have a fish in there too, and I don't want it to get sick), but this little snail has tickled me since I got it, so I want to ensure it's actually dead before I remove it.

Do you have a picture? And are you sure it’s a nerite? Some people confuse bladder snails with baby’s nerites
Upvote 0

Sure. I didn't have photos, but I took some. I had my husband smell the snail while I had it out to take photos. He said that he's smelled a total of one snail in his life, and that it just happened a few seconds ago, but he can now positively say that snails do not smell like anything at all. So, that just confirms what I thought that there isn't any smell.

I'm pretty sure he's a horned nerite and not a bladder snail. Something I notice, though is that is shell has changed color in the past few days. It's gone from bright yellow to a much darker color (still yellow but significantly darker). I'll post a photo of what it looked like before (the photo is from the carrot I gave them before the last one). 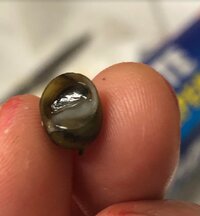 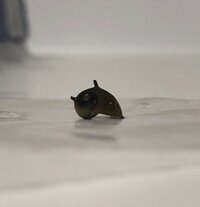 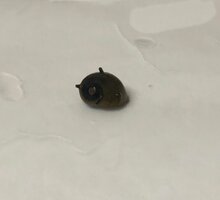 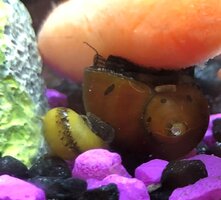 It's definitely a horned nerite. I had one of mine turn dark like that also. He lived for a few months longer. I would just keep an eye on him and make sure he is getting a chance to eat. Nerites tend to like to eat algae best, but if that's not available continue what you did with the carrot. Best wishes, it sounds like you're doing your best.
Upvote 0
You must log in or register to reply here.