Found some eggs from these guys this afternoon.

Not great pics but they will have to do. 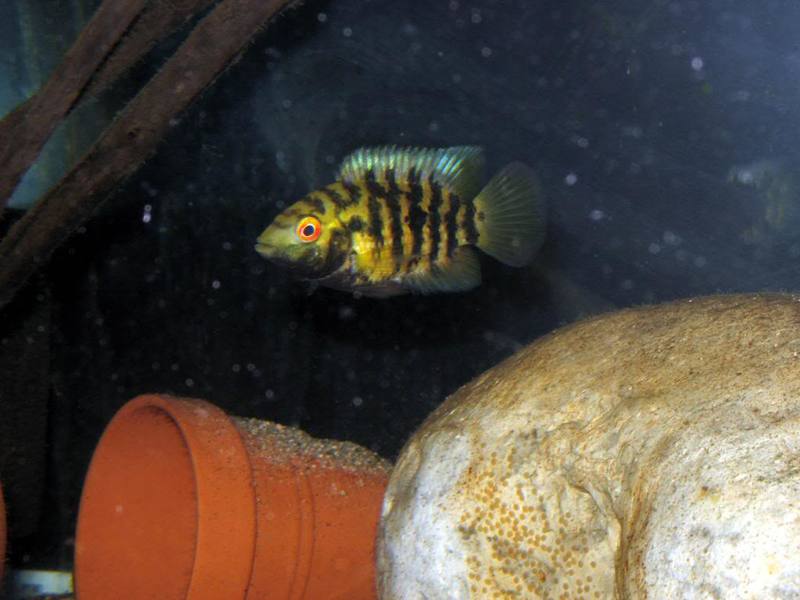 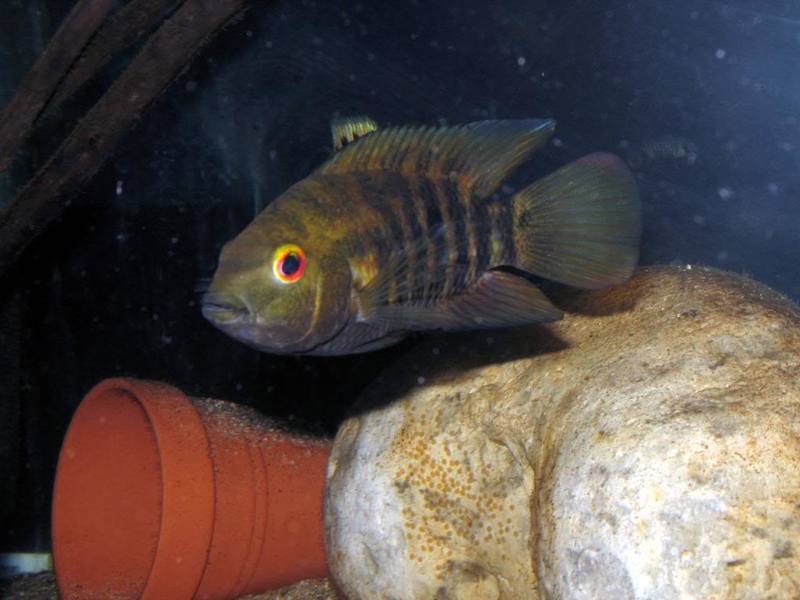 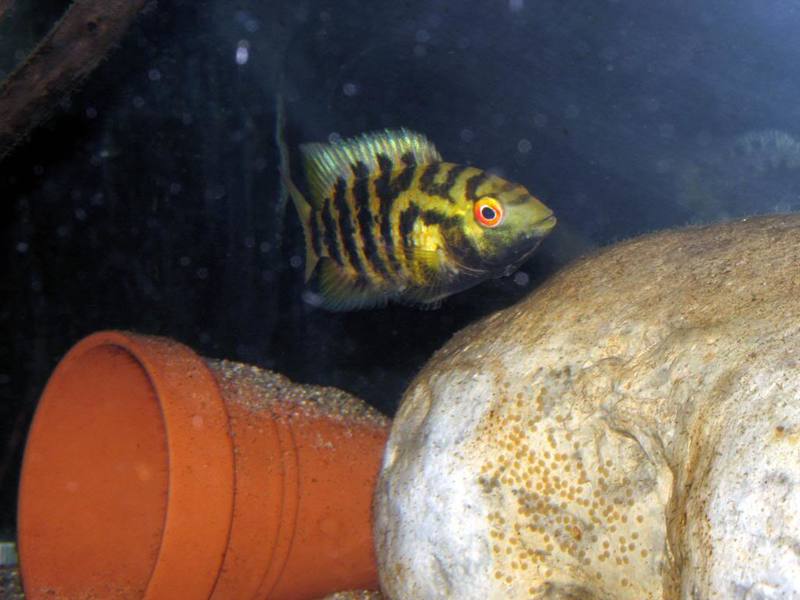 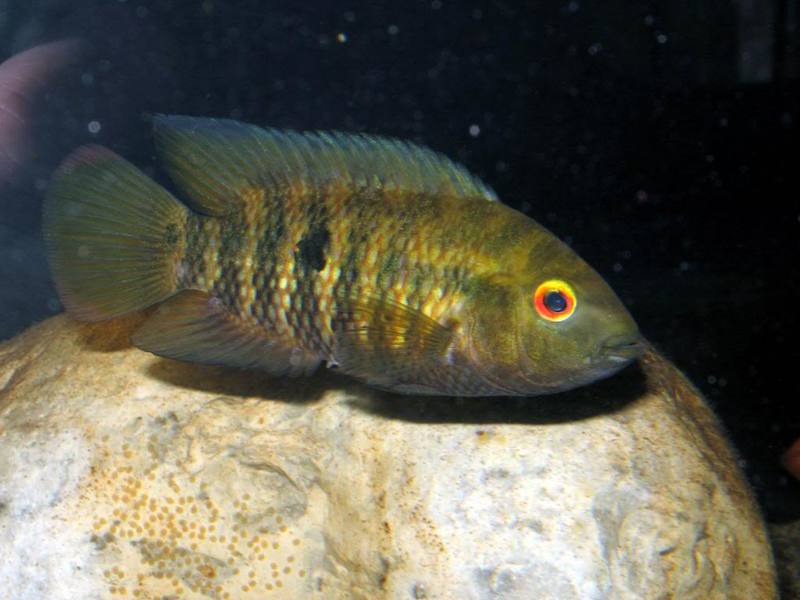 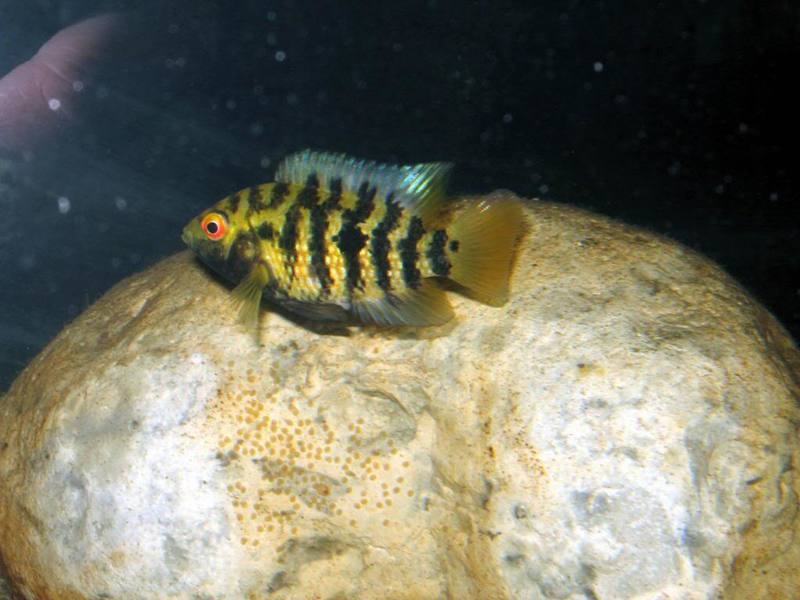 Is there anything you can't breed? That's awesome!

It must have been the weekend of the Australoheros. The Ceibal's spawned in the one tank upstairs and when I went down stairs yesterday the Australoheros cf. Scitulus have eggs also. These Scitulus have been the fish that would not spawn for me, I have had them for probably a year and a half and nothing. I don't expect any of these to make it too far along though as they are in with some Paratheraps Hartwegi and Parachromis Dovii but we shall see. I got a crappy pic of the female this morning I will add here but none of the male as she has kicked him out of the area and he is being stubborn and won't come out, but I will put an older pic of him here also. 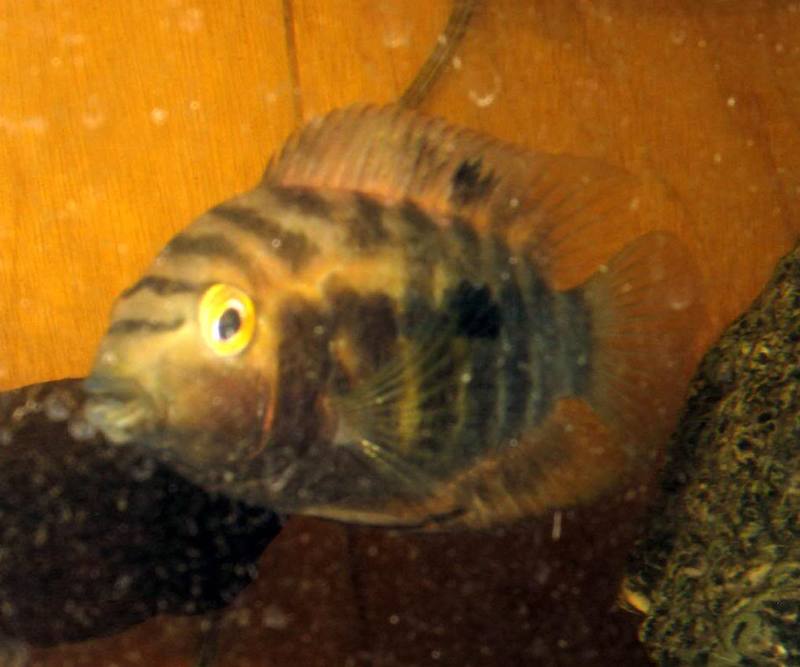 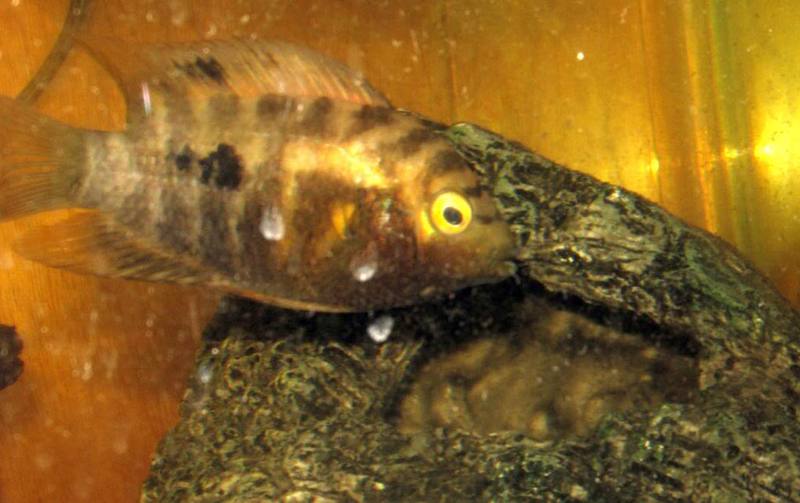 Here is an older pic of the female not colored up to show the difference. 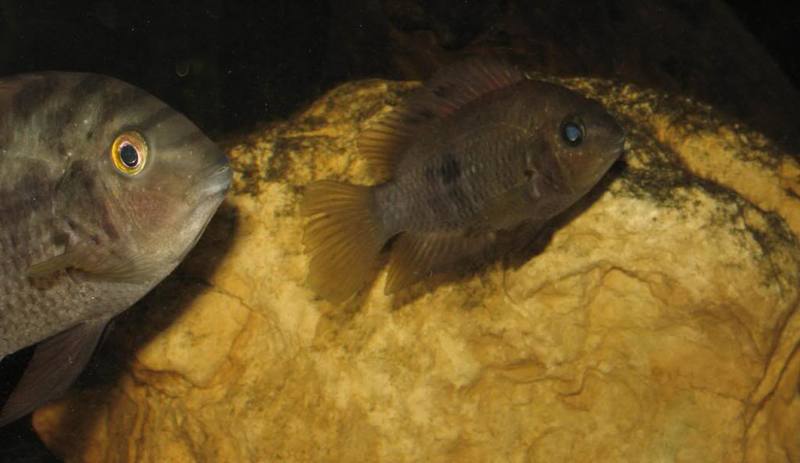 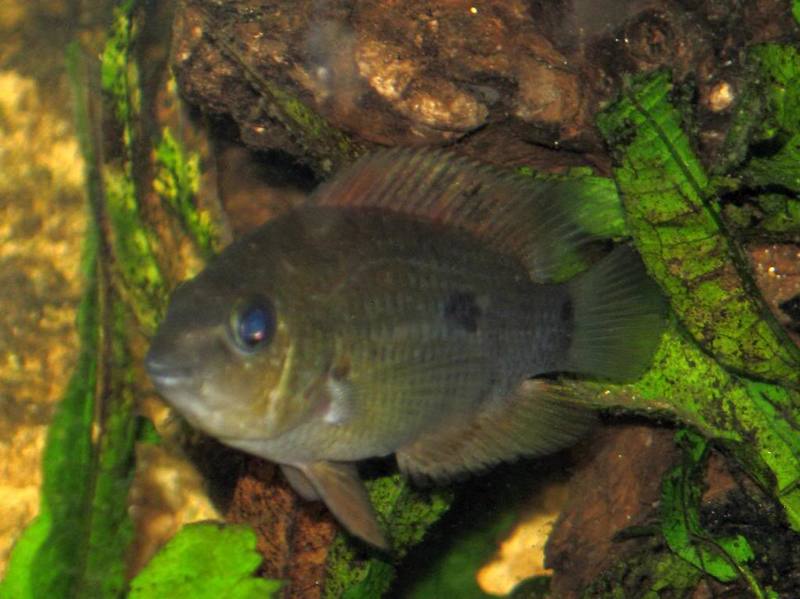 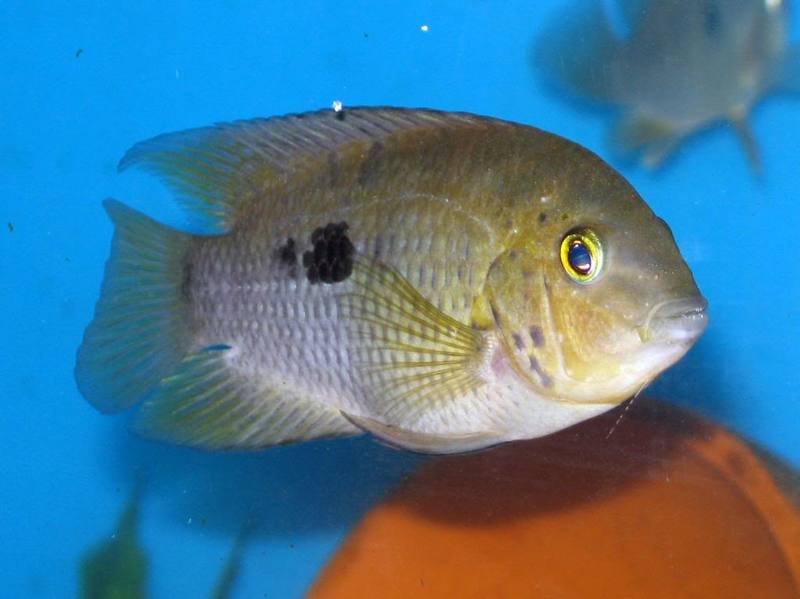 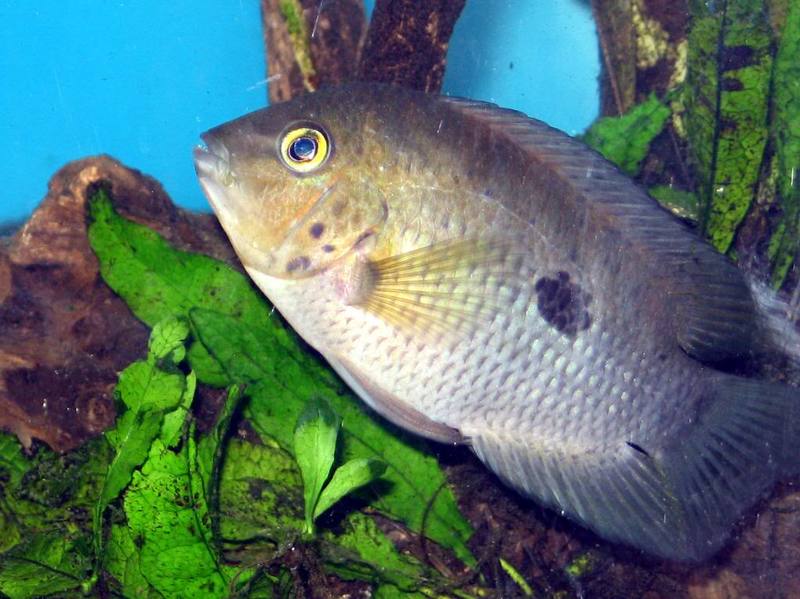 I really don't know if he stripped up when they spawned or not, because like I said by the time I noticed she had eggs she had already kicked him out of the area. I will say so far she is doing a good job keeping the Hartwegi and Dovii away. I just don't think she has much of a chance once they figure out what she has going on in that corner.....

Check you out! You have something "spawny" in your water Congratulations!

They are beautiful fish!

It has been about 2 1/2 days and eggs still look good.
A few hours ago it looks like the eyes are starting to appear in the eggs so probably another 24 hours or so I am thinking.

I have noticed two things with the Australoheros sp. Red Ceibal.
First there are probably around 80-90 eggs. 15 or so have turned white and are starting to fungus. No biggie there it happens, hey he can't hit them all right. However instead of the female removing the fungused eggs, she is picking at them but is not removing them. I have seen fish just leave them, but normally when they pick at them they will remove them.

Second most egg laying cichlids will prepare a hole dug out in the substrate to prepare for when the eggs become wigglers right. Well these two have made about 10 holes all about 2 inches across within a 10" area to the eggs. Not in a corner or behind something but right out in the open. I just thought that was odd, they must be rather confident in their defending ability I suppose. I tried for a pic of all the holes but just got pics of sand so... 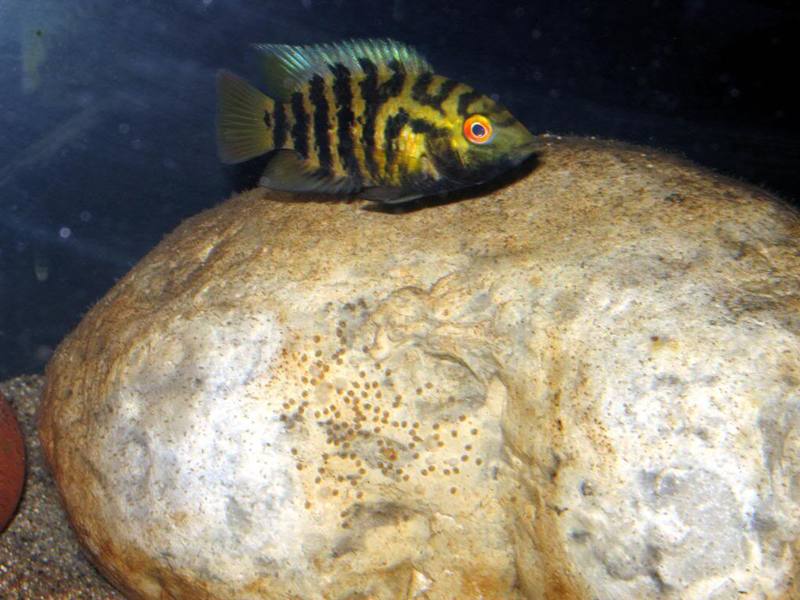 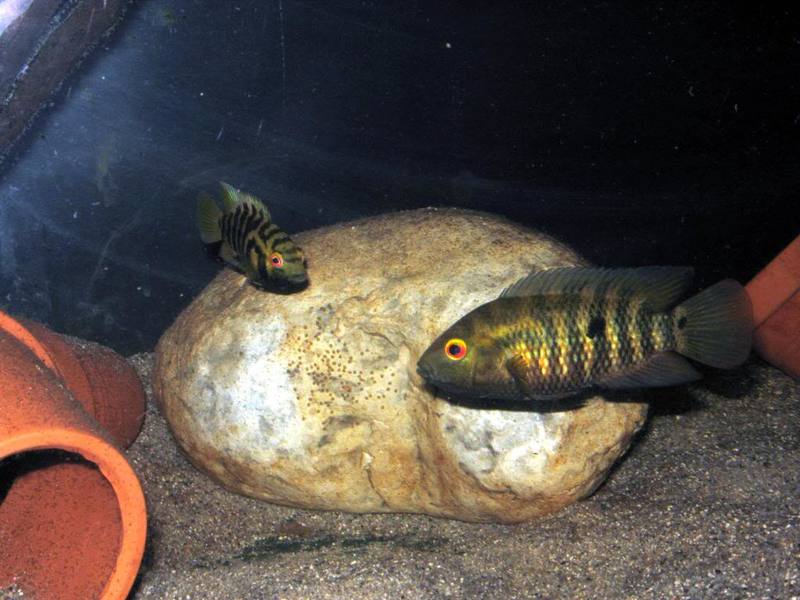 As far as digging in the open, my Firemouth cichlid pair behaves like that as well. They are getting ready to spawn again so they are constantly pushing the 4 month juveniles that are still in the tank.

Congratulation! beautiful fish you got there.

I agree about the digging of the pits, I just found it odd these 2 have made so many pits so close to the eggs. Normally in my experience anyways, they will dig the pits out of the way somewhat.

I just noticed also in the first new pic you can see the fungused eggs pretty well.

Your fish look FANTASTIC as always! Great fish and pics!

Sorry about the fungused eggs.

It's ok about the fungus, there are plenty of other good ones too.

A bunch of wigglin' tails trying to get off the rock.