"are We Minnows, Or Are We Dancers?"

I found this fella in my pond this morning as I was doing some maintenance. I believe he is a good sized male, Fathead Minnow. Is this accurate? 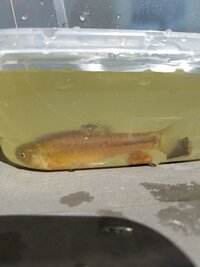 Sooooo... not a minnow then?

I was torn between a Fathead and a Gambusia because I caught him in a stream while I was trying my hand at a DIY minnow trap last fall and I've heard that Central Texas is maybe a little too plentiful with the Gambusia. Six a one half dozen of another, I need to find him a gal pal so I can raise them on snail jello and feed my Venustus.

Member
It is a Fathead, someone was just trying to be funny.

chromedome52 said:
It is a Fathead, someone was just trying to be funny.
Click to expand...

Thanks Chromedome52 , I caught what Coptapia was saying. I was just hoping for more than comedic response to my title. I intended to put a winky emojI in my response but I forgot...

I'm glad to have caught the Fathead vs the Gambusia. It looks like I'll be moseying back that direction for more. There were six in my original catch but this fella seems to be the only one remaining I did see a few wee ones that had gotten sucked into my skimmer I just figured I'd lost them all to the skimmer or Water Tigers. I can't seem to get rid of those bastards. Do you (or anyone for that matter) reckon a crayfish or three might take care of the Tigers? I'll post that up in the pond area as well now that my brain has converted this to a crossover post.
Share:
Facebook Twitter Reddit Pinterest WhatsApp Email Link
Top Bottom