So I've been having a few issues with my aquarium plants, not many are dying but just a few leaves here and there. Two plants in main tank and two in 5 gal. 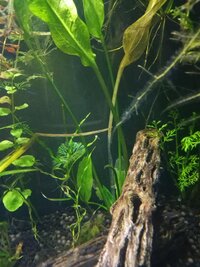 On the third leaf of the amazon sword next to the cholla it's yellow and decaying? There might have been some kind of nick on it and my snails went and ate the decaying parts and it started dying, but some other plants look like that too. 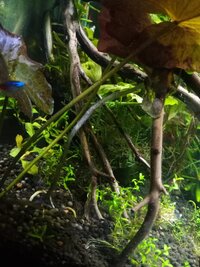 On my Red Tiger Lotus you can't see it very well, but to the right of the fish is a stem that's gray and decaying. It started off as a black withering spot on the leaf and it slowly started spreading and the snails were eating up the entire leaf. I was just about to cut it off when I came back the next day but it was already shriveled up and melting off. This happens to my banana lilies as well. 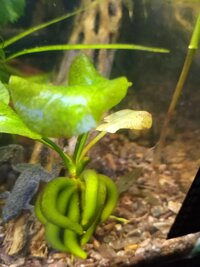 See the yellow leaf? That has happened with both of my banana lilies in both of my tanks, the leaf starts turning yellow then white and then the stem starts unraveling and shriveling up until eventually the snails and shrimp eat it off. This has always happened to the leaves that were growing the tallest for some reason. 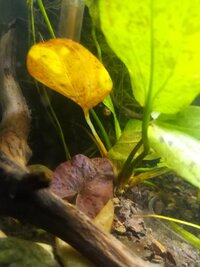 This is another plant that has turned yellow. This one has the same stem degrading thing as my Sword, but it doesn't look like there were any cuts or scratches on it. 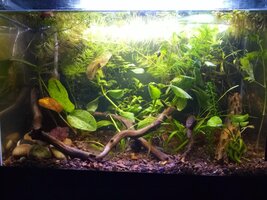 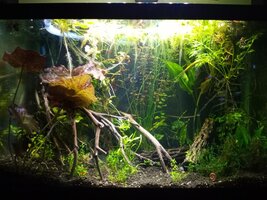 10 gal - Phosphate 0.30ppm (Not sure why so different?)
I dose recommended dosage of Flourish Advance, Aqueon Aquarium Plant Food, and API CO2 Booster (I often forget to put this in). Should I up the dosage? I tried diagnosing the problem myself but the online charts weren't specific enough. I didn't think it was the CO2 because my Baby Dwarf Tears and pearlweed are doing better than ever even when most of them are uprooted or floating on some driftwood. I should probably stop relying on other things in the tank and get some actual tests for this stuff, but it's only those plants along with a few others (2 or 3) with same symptoms.

Most of your plants grow rooted. Are you using any root tabs. Amazon sords and red tiger lotus need root tabs every month or so. You can get Flourish Root Tabs.
Upvote 0

Most of your plants grow rooted. Are you using any root tabs. Amazon sords and red tiger lotus need root tabs every month or so. You can get Flourish Root Tabs.
Click to expand...

Yes, I do have root tabs in both tanks, but it might be time to replace them.
Upvote 0

When was the last time you put root tabs?
Upvote 0

When was the last time you put root tabs?
Click to expand...

Around two months ago when I first started the tank, but I broke them into pieces because I didn't have much left and I wanted to cover more area. I'll be getting more soon though.
Upvote 0

you should put in new root tabs every month or so.
Upvote 0

Wow that's very high phosphates. It can interfere with iron uptake and amazon swords need a lot of iron. Keep in mind the plants are all competing for resources, so in a tank with multiple species there will be winners and losers. Seems like your tiger lily and amazon swords got the short end of the stick, which I am not surprised since cabomba can beat anything
Upvote 0
You must log in or register to reply here.